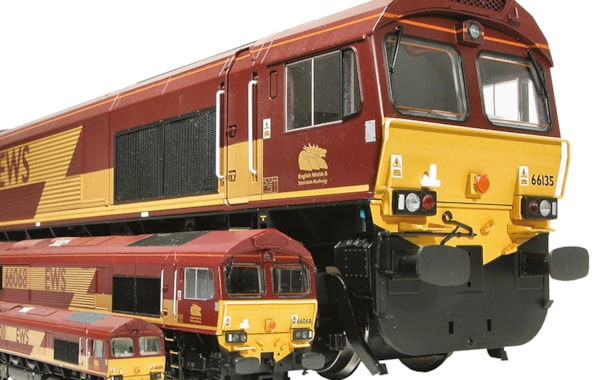 What's the difference between scale and gauge in model railways? Here's our guide to understanding model sizes.

A simple guide to understand the difference between scale vs. gauge

One of the most confusing aspects for a new railway modeller to understand in the hobby is the difference between the terms ‘scale’ and ‘gauge’. In the UK, ‘gauge’ is used more often than the word ‘scale’ - a term more popular around the rest of the world. 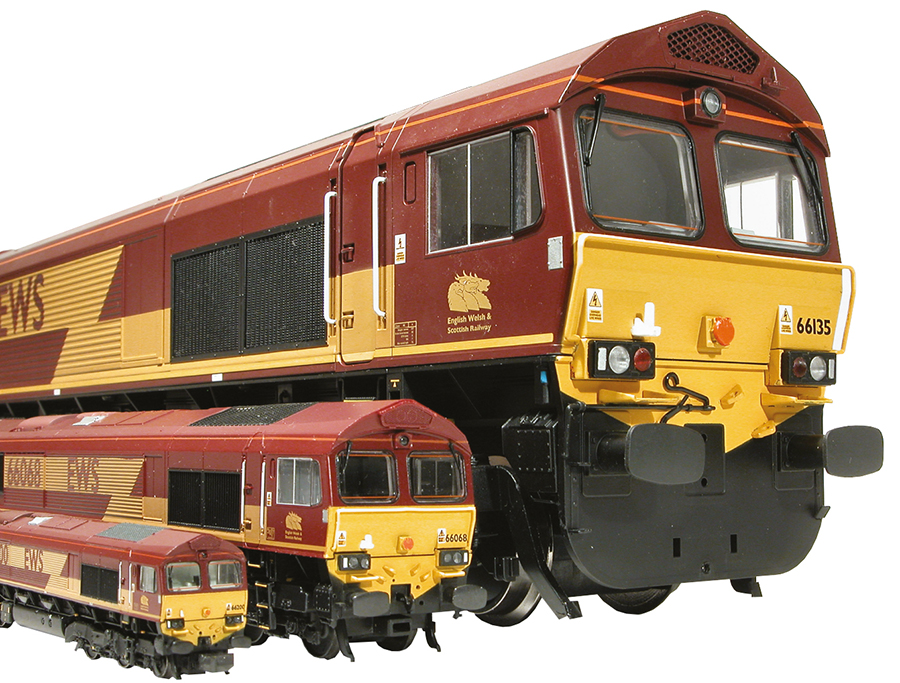 Gauge is the distance between the rails of the track in the scale chosen. Scale is the proportion of the model to the full-size item. Therefore, 4mm:1ft scale should be more correct in describing a layout, whereas OO gauge should really only refer to the track gauge. The UK has an odd combination of scales and gauges. Read on to discover why…

In the early 20th century manufacturers decided to standardise on a numbering scheme for the various sizes of models being produced. Gauges 0, 1, 2 and 3 were created to cover the four popular scales at the time.

Gauges above these tend to use the measurement concerned compared to the foot, for instance 3.5in gauge, 5 1/2in gauge or 7 1/4in gauge - these tend to be the realm of live steam miniature locomotives and model engineering rather than model railways.

Before the second World War, German manufacturers began to produce railway models to the scale of 3.5mm to 1ft or half the size of O gauge. This scale was referred to as ‘half-O’ or HO scale. It remains the most popular railway modelling scale used throughout the world, with the exception of the UK. The UK uses HO gauge track, but with everything else modelled to a scale of 4mm:1ft because of the UK’s restricted loading gauge. Most British rolling stock in HO scale looked small in comparison to its continental counterparts and it was difficult to fit mechanisms into the smaller prototypes because of the motor and gearbox technology of the time.

The UK standard was set that rolling stock would be produced to a track gauge of 16.5mm (HO), but everything else would be increased by 0.5mm from 3.5mm:1ft to 4mm:1ft scale. This means that 'OO' is a ‘narrow gauge’ because the spacing between the track isn't correct. Model railway manufacturer, Hornby, produced its ‘Dublo’ range, cementing the scale in the nation’s heart.

Those who model in OO gauge have the benefit of The Double O Gauge Association to help maintain standards within the manufacturing side of the hobby.

Some modellers wanted to remain true to scale and couldn’t cope with an inaccurate scale/gauge ratio in OO. A group of modellers decided to continue to model in 4mm:1ft scale, widening the track gauge to suit. Real railway tracks in the UK have a gauge of 4ft 8½in. In the scale of 4mm:1ft, this equates to approximately 18mm. The EM (Eighteen Millimetre) Gauge Society was born.

Later, it was considered by some that 18mm was too approximate, so the Protofour (P4) Society was formed, working to the exact scale track gauge of 18.83mm. The P4 Society was superceeded by The Scalefour Society who took over the reins of exact scale 4mm modelling.

As things changed post-World War II, the amount of space available in the average house for model railway layouts was getting smaller. Mainland Europe had responded by creating a scale of 2.54mm:1ft (a ratio of 1:120). This was observed by the Managing Director of Tri-ang Railways, then one of Hornby’s competitors, who saw the possibilities that this scale could provide. A range was started in the UK, to a scale of 3mm:1ft (a ratio of 1:101.6) because of the usual problems with fitting mechanisms inside the smaller bodies. Tri-ang called this ‘Table Top’, or TT gauge. The track gauge was maintained at 12mm, causing a similar arrangement to OO.

From its launch in 1957, TT wasn’t as popular as hoped, probably because of the sheer dominance of OO gauge and the rising popularity of N gauge. When Tri-ang decided to drop the range in the late-1960s, a group of modellers in the scale formed The 3mm Society. The accepted track gauge was 12mm, but by then there were some already working (as with EM gauge vs. OO gauge) to the closer-to-scale track gauge of 13.5mm or the dead-scale (as with P4 vs. OO gauge) 14.2mm gauge. 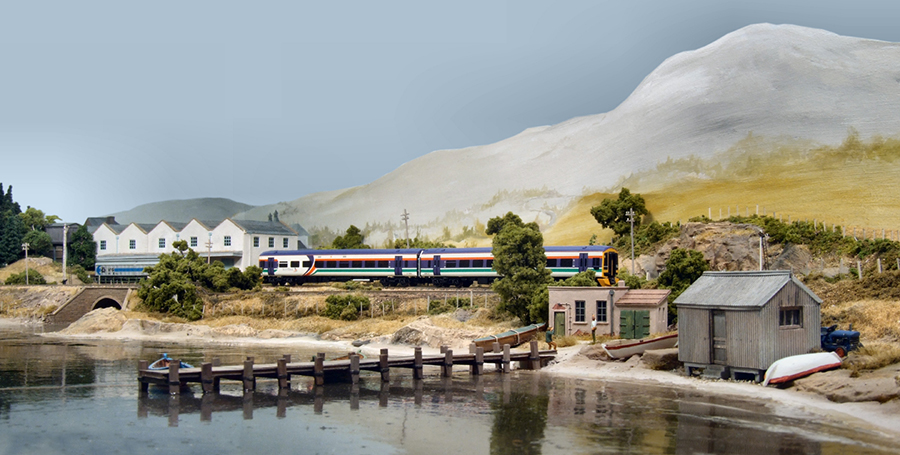 Loch Tat is an N gauge model railway set in the Highlands of Scotland. The smaller size of N gauge makes it easier to create greater landscapes for a given space than OO or O gauges. Read more about this layout here.

The scale of 2mm:1ft was tried out in the UK by Lone Star in the 1960s and branded OOO gauge. It was German manufacturer Arnold which first produced a full range in the scale and called it N after its nine-millimetre gauge. Changes occurred in Britain, possibly because of the problems in fitting suitable mechanisms into our stock. The UK and the rest of the world use the standard track gauge of 9mm, but the UK uses a scale of 2.06mm:1ft. Other countries use a scale of 1.91mm:1ft (ratios of 1:148 and 1:160 respectively).

Some modellers, dissatisfied with these standards in the UK and the over-tall appearance of the rails, introduced finer standards and thus the 2mm Scale Association was born. Working to a track gauge of 9.42mm (dead-scale for standard gauge at a ratio of 1:152), with a finer, more accurate track profile, the Association has set new standards in 2FS ‘finescale’ modelling.

The problems affecting the other scales in the UK haven’t affected the smaller scales of Z and T, probably because the former isn’t as commonplace and the latter is comparatively new! Z scale is almost entirely the province of German manufacturer Märklin as its ‘Mini-Club’ range, with a track gauge of 6mm and a scale of 1.4mm:1ft (a ratio of 1:220). A range of UK-based layouts have been built in Z, even one in ‘finescale’ Z, or Proto-Z, with a track gauge of 6.5mm.

The newest of the scales is T, produced in Japan, with the remarkably small gauge of 3mm between the rails, which scales to 0.61mm:1ft or a ratio of 1:450. You can now achieve your model of the terminus at Waterloo in a small room!

BACK TO THE BEGINNING

Following a downturn, because of the popularity of OO gauge, O gauge has become more popular recently, due in no small part to the efforts of the Gauge O Guild and manufacturers old and new. As with most other scales, there is a difference between O gauge in the UK, mainland Europe and the USA. The scale in Europe has settled down over time to the unusual mixture of imperial and metric. Europe has a track gauge of 32mm, but the Continental ratio varies from country to country.

The larger scales haven’t been forgotten either, Gauge 1 has the Gauge 1 Model Railway Association who promote the standard scale of 10mm:1ft (a ratio of 1:30), but also the slightly smaller but more prototypical 3⁄8in, 1:32 or 9.5mm to 1ft (this is also more common in the US).

Gauge 3 has the Gauge 3 Society for support and is used as a scenic indoor scale, rather than its engineering cousin 21/2in gauge, used for ride-behind locomotives.

A scale which sits between the popular scales of OO and O scales is S scale. It’s still one of the true imperial scales, at 3/16 in:1ft (a ratio of 1:64) with a track gauge of 7/8in. Unlike the US, where the scale is used by a large manufacturer, it is mostly used by scratch-builders in the UK (those who build from scratch without using kits). The S Scale Society offers products to facilitate modellers.

An organisation supporting all of the scales between S and 3 is the Association of Larger Scale Railway Modellers. 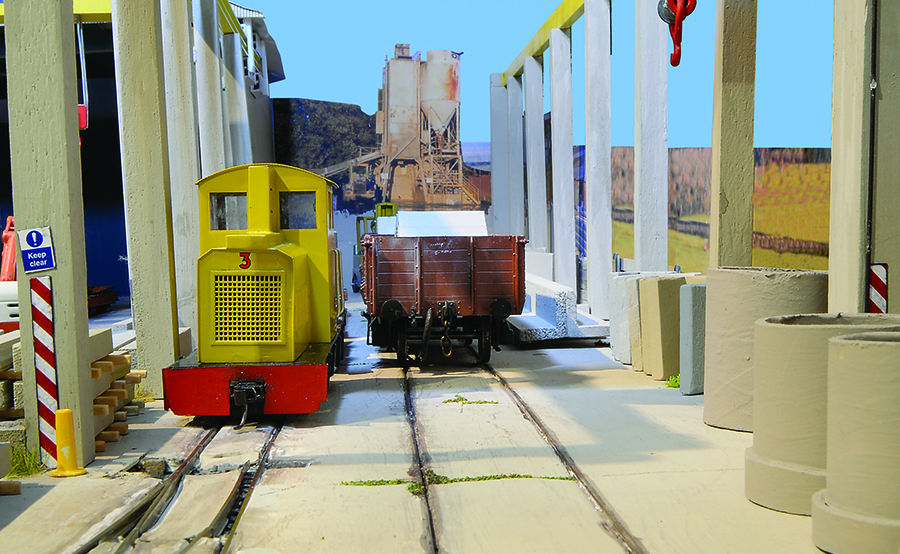 Options increase as we head towards the 4mm:1ft scales...

In the larger scales...

One of the mainstream narrow-gauge ranges in the larger scales is G. Originally started by Lehmann in Germany in the 1960s, using the trade name LGB (translated as Lehmann’s Garden Railway), G scale is the modelling of narrow-gauge railways (to various scales ranging from 1:20 to 1:29) on track 45mm wide - the same as gauge 1, but having a heavier profile track suitable for use in the garden.