Looking to model water on your next layout project? Whether it's a tranquil river, canal or bustling dock, here are trackplans that work, to provide the inspiration you need.

Modelling water in its many forms on a layout is a popular choice for many builders. Though not the easiest to model, water effects can be satisfying, with the potential for cameo opportunities and scenic details. 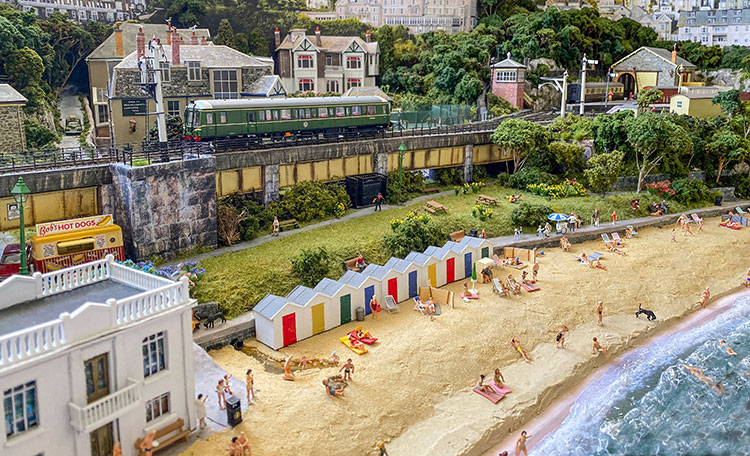 Paul Fabricius downloaded AnyRail track planning software and began designing a fantasy layout incorporating every kit he fancied, in a fantasy space. As reality took over, two insights from BRM contributors stuck with him: don’t be afraid to build a real location, and to place the railway in the landscape. With this in mind, he committed to creating St. Ives in his spare bedroom.

The sea presented a challenge, and drone photographs provided a solution. He chose a photograph with a nice wave pattern, looking directly down on the shore. Having manipulated the image in Photoshop, it was printed on A3 gloss photographic papers and stuck to the baseboard. The waves were made by thinly squeezing on builders' clear mastic, guided by the waves in the photograph underneath, teased into wave shapes with a coffee stirrer, and then painted with Woodland Scenics' White Water Highlight. 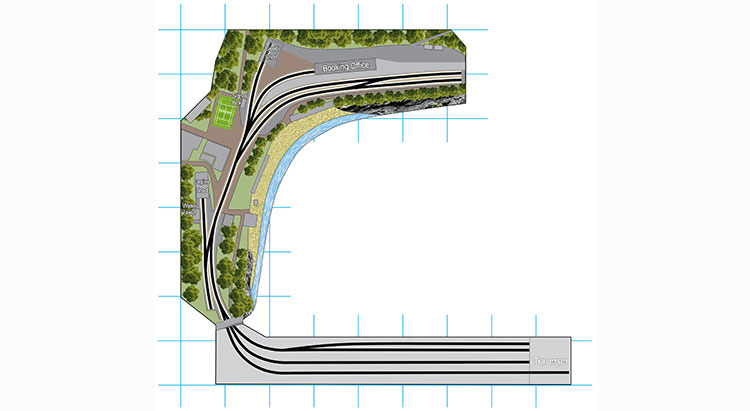 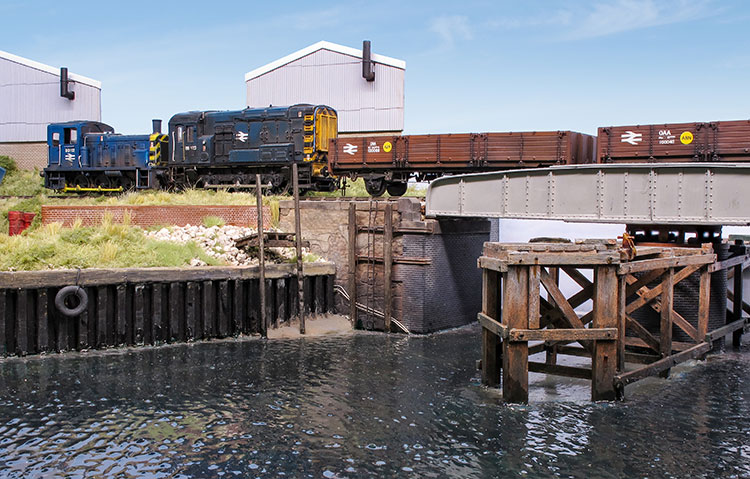 Inspired by an article in BRM's sister title, Traction magazine, Mike Knowles sourced ideas for this dock layout from opposite sides of the country. The P4 gauge layout is set around 1975-1985 and is part-based on the swing bridge at the entrance to Boston Docks and the wharf at Frodsham in Cheshire.

One of the main features is the swing bridge, which is a shortened version of the prototype to fit the available space and is made using modified Wills Vari Girder sections to give the sloping/curved ends.

After a few practice pieces, Mike ended up with the following method to create the water effect; paint the board tops a suitable mucky greeny brown, cover with two or three coats of PVA (test first to make sure it dries clear), and then form the ripples using Deluxe Materials Making Waves, applied with a fine brush held almost parallel to the surface and dragged backwards to extrude the ripples. Finally, finish with further coats of PVA and gloss varnish. 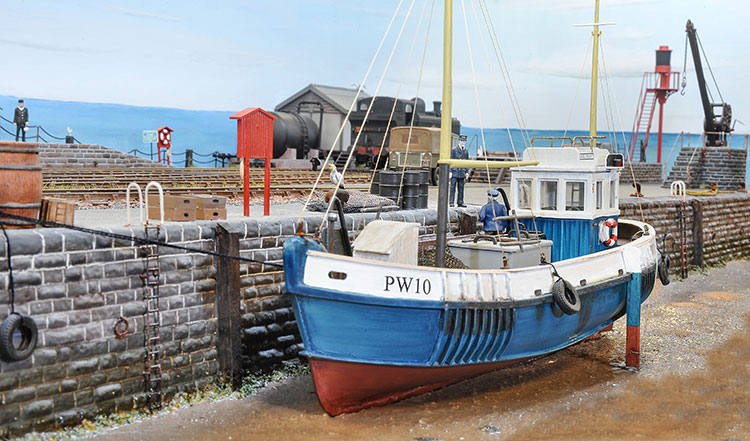 The setting for Peter Beckley's Harlyn Pier is an imaginary extension from the Padstow branch, serving a ferry terminal on a quayside. The quayside setting gives a good excuse for short sidings and a cramped track layout, while still looking believable.

Something that generates lots of queries at shows is the wet mud in the harbour. I was trying to avoid modelling water as boats rarely seem to sit well in it and I had two board joints to cross as well. It occurred to Peter, while on holiday in Cornwall, that Cornish harbours are more often than not just wet mud at low tide, so he gave this a try, not least because he felt it would be something not often seen on other layouts.

The contours were built up with DIY wall tile adhesive, then given a coat of a brown gritty scenic paint and odd rocks (broken pieces of filler), seaweed (various scatters), sand and some debris added, all done with reference to photographs of real harbours at low tide. Finally, several coats of Deluxe Materials Solid Water, a two-part resin product, were poured and/or painted on to build up pools in some places and the effect of wet sand and mud in others. 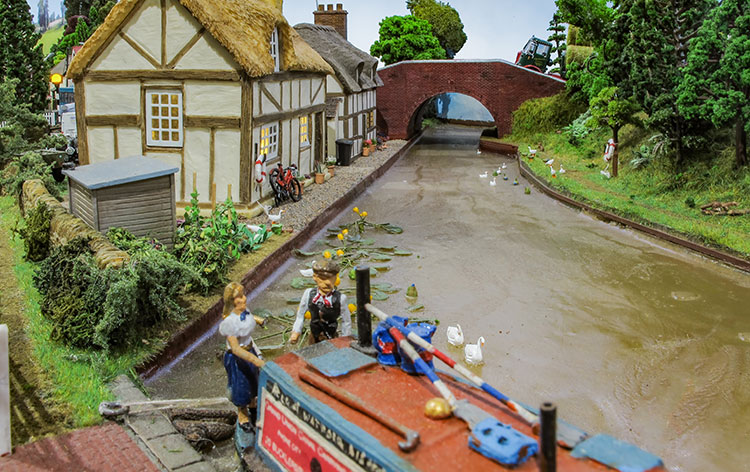 Life on a narrowboat can yield a unique set of challenges when constructing a layout, as Keith Lodge discovered, with his narrow gauge venture.

The layout is fictitious, although based upon Keith’s knowledge of canals and railways. There are five main areas – the castle ruins, Hadarford Farm, the station, the canal wharf and the village.

The most prominent scene is the canal with its canal wharf, the lock with a loaded working pair of narrowboats in it, the lock cottage, the two canal bridges and towpaths. The canal scene is based on the part of the Grand Union Canal that was the Grand Junction Canal from London.

The main challenge with this layout was creating the water effect in the canal. Keith wanted to use pouring resin, but narrowboats don't sit level, so he had to wait until he went into dry dock to paint the hull in 2019. It didn’t quite go to plan as the lock sprang a leak during pouring, and his wife desperately tried to stop the leak with gaffer tape while Keith kept on pouring. Eventually, the leak sealed. However, Keith would always recommend doing water effects by layering, rather than in one go. 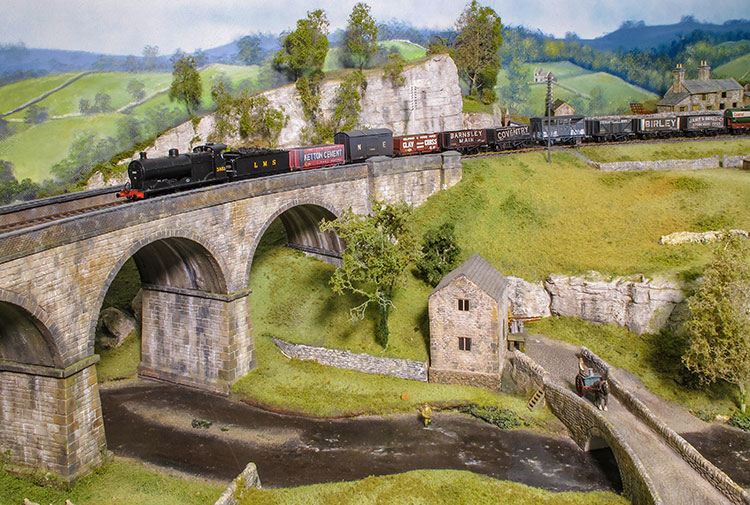 David Wright employed his refined professional model-making techniques to this latest model railway, inspired by the landscape of his home county.

One of the biggest tasks was to form the river course, which turned at almost a right angle to continue under the viaduct to the front of the low fixed baseboard. The river banks were built up using the old type of insulation board. When broken on the facing edge, it gives a good impression of the land worn away by the river. This was glued down after gluing the river bed first, which included the forming of the weir and the two low waterfalls. To form the river bed, David used fine sand and grit. This was glued to the surface.

Next, the river bed had to be painted to replicate the depth, before layers of gloss picture varnish were brushed on, giving a clear surface to the river. Where the water was disturbed by falling over the weir, and around the pebble island, white water would be produced. To replicate this on the model, David used white oil paint. If this is applied just before the last coat of varnish has dried, it should react and feather out giving a very good impression of this action. 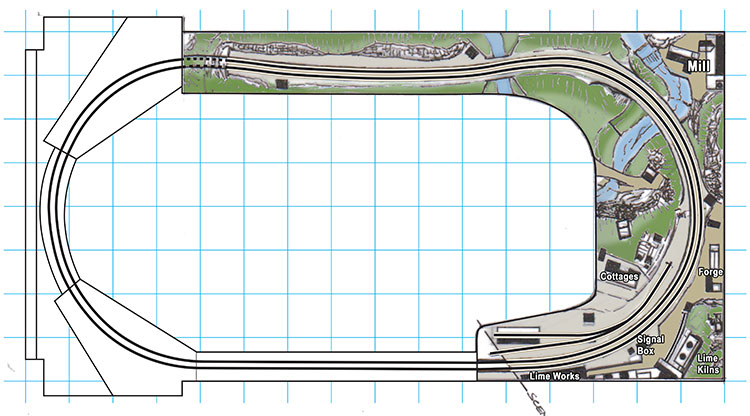 World of Railways Plus members gain access to our Trackplan Archive, home to a mass of trackplans of many of the country’s best model railways. Find inspiration and essential information for your next layout build on all gauges, including OO, N and O.

Find out more about becoming a World of Railways Plus member here.