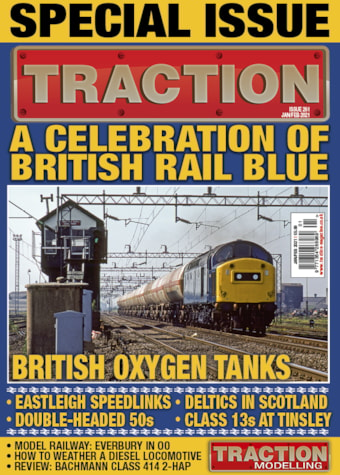 In this special issue we celebrate the Rail Blue years of British Rail. We start with the short period when pairs of Class 50s were introduced to speed up the principal services north of Crewe on the main line to Scotland.

David Hayes concludes his look at the Midland Main Line, the southern part into London between Harpenden and St. Pancras. Barrie Rigg talks about ‘Those occasional oddities’ on his journeys around the north of England. We start a two part feature by David Hayes about the distinctive tanker trains run for the British Oxygen Company. Staying with freight traffic, John Dedman recalls the short period in 1985 when Class 45s were scheduled to power Severn Tunnel Junction to Eastleigh Speedlink freights. Martin Axford recounts his photographic experiences with different cameras in his younger days with particular emphasis on his favourites, the Class 33s. Finally Gavin Morrison presents a selection of Rail Blue images ranging across Britain from Penzance to Georgemas Junction.