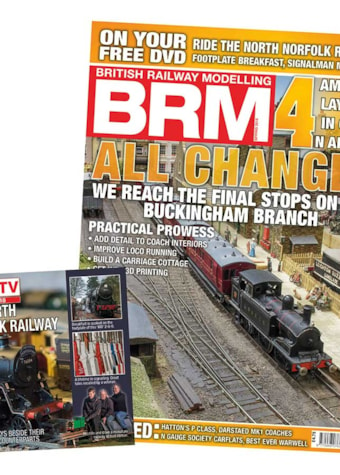 4 amazing layouts in OO, N, O and EM, we ride The North Norfolk Railway on this month's DVD + enjoy no fewer than 7 Practical BRM articles

The North Norfolk Railway - model railways beside their real-world counterparts

A lifetime in signalling. Great tales recalled by a veteran

We ride and drive a miniature railway at Holt station

Churchill Halt (O): we look at John Taylor's latest project whilst it's being built.

No Place (OO): Les Richardson admits to spending too much time in colliery yards as a lad. His oddly named layout is the result.

Getting started in 3D printing

Trade News: including a new wagon from Accudawjoy1@gmail.comrascale, a Dapol GWR Mogul and more.

New Models: a look at this month's latest commissions, including those from Kernow and Cheltenham