Following the arrival of Heljan's Class 25/2 and 25/3 locomotives, Andy York has the opportunity to review an exclusive version produced for retailer, The Model Centre (TMC).

The Class 25/2 and 25/3s are visually the same and only differed internally with their generators and control circuitry, with build dates from December 1963 through to April 1967. The original numbering was D5233-99 and D7500-D7677, built by Derby Works and Beyer, Peacock of Manchester between December 1963 and April 1967. Initially introduced in a two-tone green livery with small yellow warning panels akin to the Class 47s, they went on to wear different liveries including two-tone green with full yellow ends as on our review sample and BR Blue with small yellow panels or full yellow ends. Withdrawals took place mainly from 1980 through to 1987, but their later life took an unusual turn with the removal of their power units and conversion as the famous Scottish Region ‘ETHEL’ (Electric Train Heating Ex-Locomotive) train heating units as a short-term solution prior to the delivery of Class 37/4s in 1985. These machines later found work with InterCity’s Charter Unit, lasting into the 1990s. 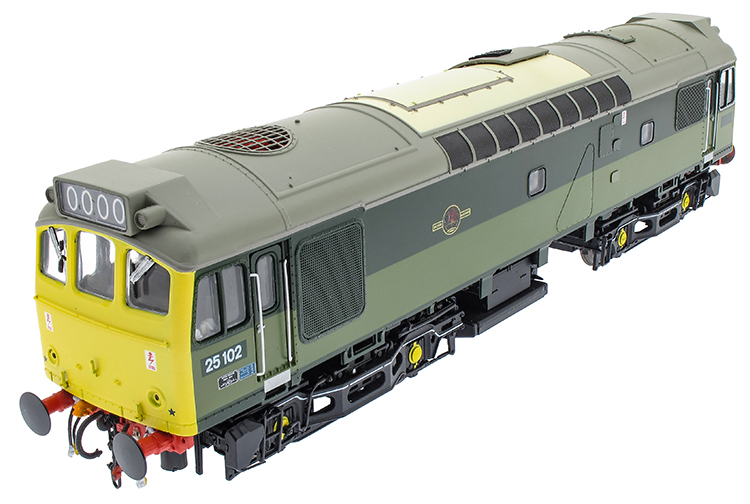 Heljan is offering a broad cross-section of BR green, BR blue and special liveries with a choice of London Midland, Scottish and Western Region prototypes from the mid-1960s to the late-1980s, plus the ETHEL units in un-powered form. There are tooling variations within the range, with earlier models featuring the circular exhaust port with the rectangular arrangement on later versions. The modeller can add specific details appropriate to specific locomotives at different points in time with the bodyside step cover plates, which were fitted for safety reasons when working under electric wires, although they were known to go missing. Covers for the smaller bodyside grille are also provided to cover later adaptation and all these detail parts are painted to match the livery of the model purchased.

Our TMC model was something of a celebrity as the last Class 25 to wear two-tone green livery with its TOPS number of 25102, which it received in January 1973, it stayed in this condition until a major works visit to Derby in April 1976. Heljan has done a very good job of capturing this transition livery and its anomalies such as the old 5252 number on the cabsides block-painted out with Brunswick green over the lighter Sherwood green before application of the 25 102 TOPS characters below the driver’s side window, also retaining the late British Railways crest but with a blue TOPS data panel on the cabside. At first, I wondered if Heljan had only painted the metal cabside windows at one end but this is entirely correct checking on colour photographs of the period. Out of the liveries released, this is certainly my favourite as I frequently saw the locomotive around the East Midlands and later at Manchester Victoria where it regularly performed pilot duties while in this condition. 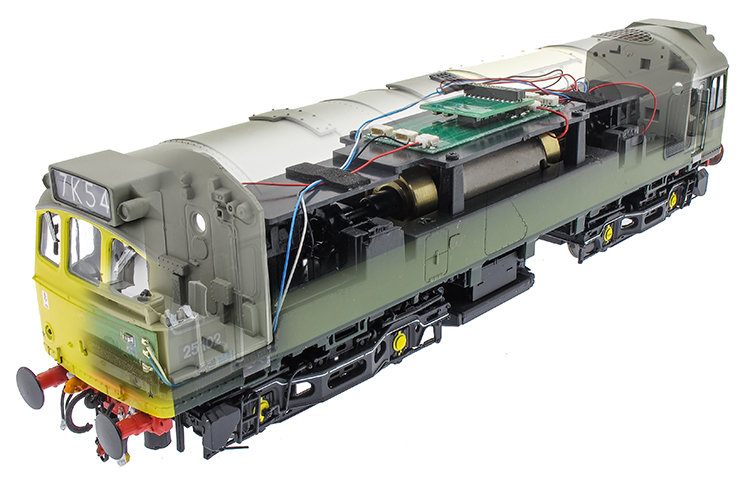 The initial impression when I unboxed the model was that it was lighter than a typical Heljan Bo-Bo, and the reason for this becomes apparent when removing the body to fit a 21-pin decoder. The chassis design features less dead weight die-cast metal and more space for circuitry, wiring and speakers – a welcome change in my view. This diesel will certainly be one of the easiest to fit a crew into as the cab interiors are mounted on the chassis. The 5-pole motor with twin brass flywheels can be seen, and drive is to all four axles via shaft arrangement to the gear towers on each bogie. The weight reduction isn’t noticeably detrimental to performance – it capably handled 12 Mk.1 coaches, but as with the real thing, if one Class 25 isn’t enough, just add another!

In DC mode, the model features directional lighting with an appealing lack of evenness to the lighting on the headcode panel (prototypical with bulb illumination) and red tail lights at the rear. The performance on test is typically good, as Heljan units normally are, with excellent slow-speed control and low running noise. 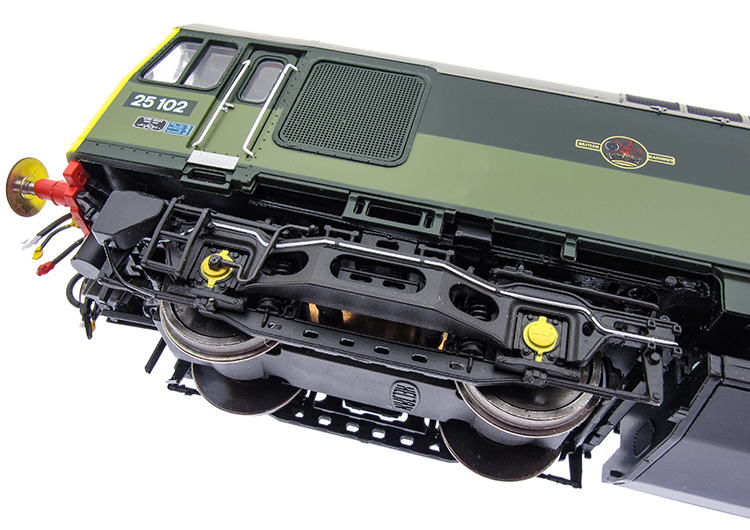 The accuracy and detail of the bogies are especially pleasing with very little daylight observable between the bogie and body even at low angles, while still maintaining necessary clearances. Even the fuel gauge inset from the fuel tanks is decorated, though I doubt it would have stayed clean for long! There’s a pleasing finesse to the detail on the cab ends, with a particularly fine handrail, light surrounds and lamp irons. I may get around to replacing the plastic wipers with etched ones but, honestly, it's as far as I’d go – apart from some appropriate weathering of course. TMC can look after the customer in that regard, too, offering a range of additional weathering and detailing options on its website.

The model looks every inch a Class 25, scaling out exactly against prototype dimensions. One RMweb poster howled that it looked nothing like a 25 as the top of the cab door window was too low – I’ve checked, it’s 1mm too low. On the printed page I can’t post a 'rolling-eyes emoji' like I would on RMweb.

The model has been sitting on my desk for a few weeks now while I’ve pored over the details and reference material, and in that time, it has found a place in my heart as one of my favourite diesel models. Thoroughly recommended.