Howard Smith examines this new range from Dapol / Lionheart, which he finds raises the bar on quality, at a highly-competitive price.

Despite the relative infancy of more affordable ready-to-run O gauge rolling stock, the shrewd modeller can seek deals on second-hand quality kit-built items from auction websites and second-hand specialists. All the more reason for RTR manufacturers to surpass these levels of quality and deliver cutting-edge models at an unbeatable price point. This new range of rolling stock from the Dapol / Lionheart Trains partnership delivers just that.

The history of the Mk. 1 coaches is best read in a book than a model review, given their convoluted history of service and modifications. For this reason, and for information completeness, I can highly recommend the book British Railways Mark 1 Coaches by Keith Parkin.

And so to the model. Announced in 2017, it has taken the Dapol / Lionheart Trains partnership four years of development to introduce this range of coaches with cutting edge features such as magnetic corridor connectors to provide gap-free running around second radius curves, configurable lighting with optional DCC control and tooling to accommodate lot number variations. Kindly sent for review by the manufacturer is a sample of its BSK (E34008) and CK (E24154) in BR crimson and cream.

Without pointing out the obvious, or sounding like a broken record when talking about ‘detail’ or ‘rivets’, each of the following is worthy of mention, beginning with the outside. Lionheart has captured the Mk. 1 body profile better in injection-moulded plastic with a very high degree of fidelity. Looking end-on, the tumblehome, roof profile and ends are the best I’ve seen in injection-moulded plastic in the scale. Despite its necessary thickness for strength when handling, the glazing isn’t prismatic and offers window aperture frames of prototypically-accurate thickness. Speaking of which, on the two samples received which depict earlier batches of the coaches, running on BR.1 bogies, we see the recessed window glazing. The panel line between these and the side curvature is well-executed and offers variation to previous coach releases from other manufacturers. 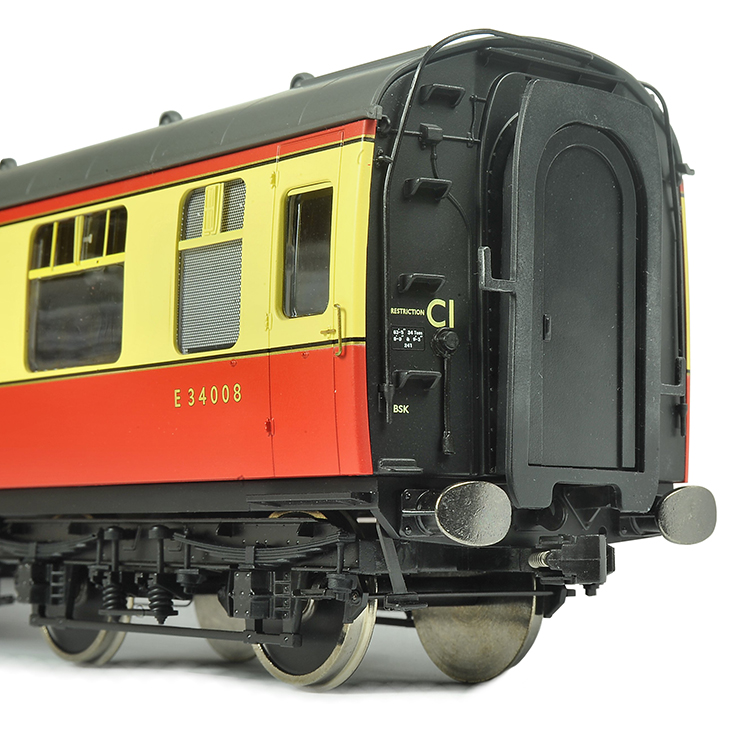 Bogies are all BR.1, for now, though Dapol / Lionheart hasn’t ruled out other types as it plans future batches with potentially different liveries. These are the best incarnation of the BR.1 bogie we’ve seen RTR under rolling stock for their robustness and accuracy. Solid items, partly because of their die-cast metal sides, but also their sturdy injection-moulded plastic frame with cross-bracing as per the original design, they deliver power too. Each side frame being isolated from the central plastic carrier, allows axles to conduct electricity from the rails, transmit it through sturdy brass bearings – ideal for long-running sessions on a club layout – and ingeniously deliver power to the interior lighting via a group of micro switches, or integrated DCC decoder.

The model’s ‘stance’ on its bogies looks right, and the profiles of the wheels fitted are accurate, though for the perfectionist, lack the distinctive holes to their ‘dishes’. Ample articulation is provided on bogies to allow models the freedom of second radius curves, despite representations of the bogie brake rod actuator and dynamo belt being in close proximity. Joining these items, are battery boxes and brake reservoirs with ‘V’-hangers. All underframe detail is visible if photographing your layout from a low angle and was worthy of inclusion. 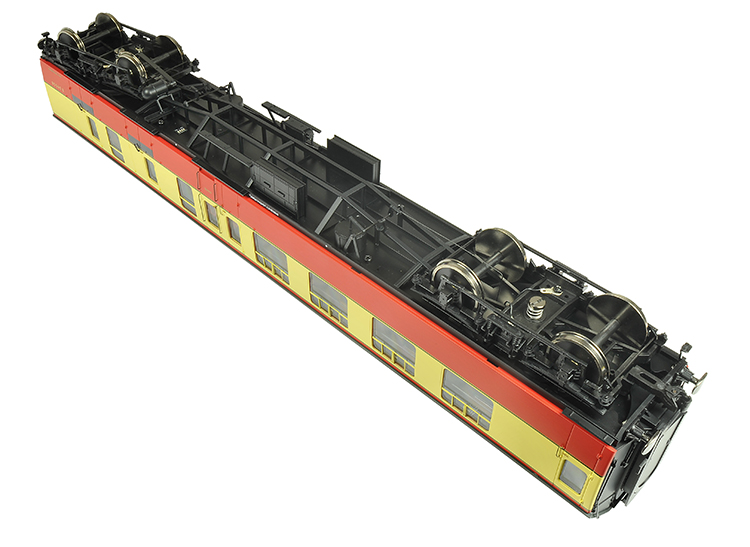 Speaking of which, where many manufacturers have drawn a line in the past, Lionheart has continued, offering a valuable detailed interior for modellers. Arguably a necessity if lighting the interior of such models with detailed exteriors, their interiors are detailed and decorated to an equally high standard – a key selling point and the most-accurate I’ve seen in the scale.

Through the windows, you’ll find corridor grab rails, compartment doors with panel detailing and painted silver metal finger grip handles, not moulded in self-coloured plastic, but painted. And, no-smoking signs – inside each of the relevant compartment entrances! Easier to spot through the compartment side of the coaches is the seating, upholstered with striped maroon transfers. I’m hopeful that further coach variants will feature period-correct partition decorations and upholstery to reflect some of the many refurbishments and upgrades seen by these vehicles.

To the ends of the vehicles, magnetic corridor connections provide gap-free breaks when running a rake for added realism. Their operation is simple, yet sturdy and they are easily stowed when not extended by pushing flush. Beneath, screw-link or an operational buckeye coupling is fitted – supplied in the accessory pack. Cast nickel buffers on square tapered shanks prevent undue rotation, and their profile looks accurate. Arguably, chemically-blackening these and the outer-edge of the wheel treads might have been beneficial, but I'd opt to paint them. In the accessory bag, two versions of corridor connection end plates are provided for variety, with electrical inter-connections in a ‘connected’ pose, plus a vacuum pipe and steam heat pipe.

It's rare that a new RTR model release for the scale has me in awe as we’re becoming used to a set standard of principles. For an item of rolling stock, this new range from Dapol / Lionheart has raised the bar and at such a highly competitive price, it’s little wonder that many of its versions have already sold out. Highly-recommended.