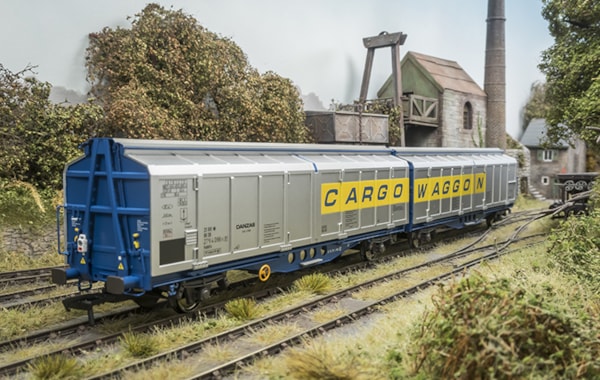 Released in two liveries – the original 1986 Cargowaggon and the revised livery with additional warning labels as applied in the mid 1990s, Kernow Model Rail Centre's OO gauge IZA Cargowaggon Twin Vans manufactured by Revolution Trains have arrived with the retailer, and await customers.

The first 100 of these twin two-axle vans, coded IZA under TOPS, were introduced during 1986/87. From the outset, they were designed for traffic between the UK and the continent. Featuring four sliding wall doors per side, this gave complete access to the floor to allow forklift trucks to load and unload palletised goods. The IZAs have also seen use on domestic workings over the years, including distributing Guinness from Park Royal in West London, transferring car components between Swindon and Longbridge, and newsprint from Immingham and Felixstowe to terminals across the UK. The vast majority remain in service. Their success led to further builds of 50 pairs each in 1989 and 1991.

The unusual twin-wagon configuration had not been seen in the UK before, this essentially being two single vans semi-permanently coupled together without conventional drawgear between them. Treated and numbered as one wagon, the brake gear was shared between the two elements with one having much of the air brake equipment while the other was fitted with the handbrake. In design terms, the relatively short wheelbase of each half allowed them to be sized to make the best use of the UK’s restrictive loading gauge, while being classified as four-axle vehicles delivered advantageous shipping tariffs compared to a pair of normal two-axle vans. There was also a payload advantage as two-axle vehicles allowed a higher axle loading so a twin-set could carry a maximum of 62 tonnes, which was ten tonnes more than a conventional Cargowaggon bogie ferry van, albeit with a length increase of just over five metres.

I have 4 sets and they all derail on setrack points