What is bullhead rail? Bullhead rail profile was common-place in the UK throughout the 19th and 20th century. It has a rail head similar – though not identical – in appearance to its foot.

Bullhead rail was once the most popular type of rail across the British railway network. After many iterations of rail design during the pioneering years of the railways, a new standard for rail was established in the mid-19th century in Britain which would last until the mid-20th century, undergoing revisions.

The origins of bullhead rail stem from a type of reversible rail – double-headed rail – which had an identical rail head and foot. In theory, as the rail wore away through use, each length could be turned, its bottom becoming the top rail head, effectively doubling the life-cycle of a length of rail and reducing costs. Tracks which wouldn't wear quickly, however, would experience heavy corrosion of the metal, often leading to pitting of the underside of the rail and the chairs would often leave wear marks behind. Furthermore, the stresses on the metal would be reversed, potentially leading to cracks. The design evolved into 'Bullhead' rail, where the railhead was made stronger than the foot.

BS9 – one of the first British standards – was for bullhead rail and saw publication in 1905, with a later revision in 1924. By the 1950s, more flat bottom rail was being laid on lines in the UK than bullhead, though its use survived for many years in sidings and secondary routes, some of which can still be observed today. Most railway lines on the UK mainline network now use flat bottom rail because of its reduced maintenance costs – it doesn't require the heavy chairs which support bullhead rail to sleepers, and its welds over the use of fishplates means that regular checks for the tightness of bolts isn't required. UK Heritage railways prefer the use of bullhead rail of flat bottom rail for authenticity and its ease of purchase when lines are lifted. 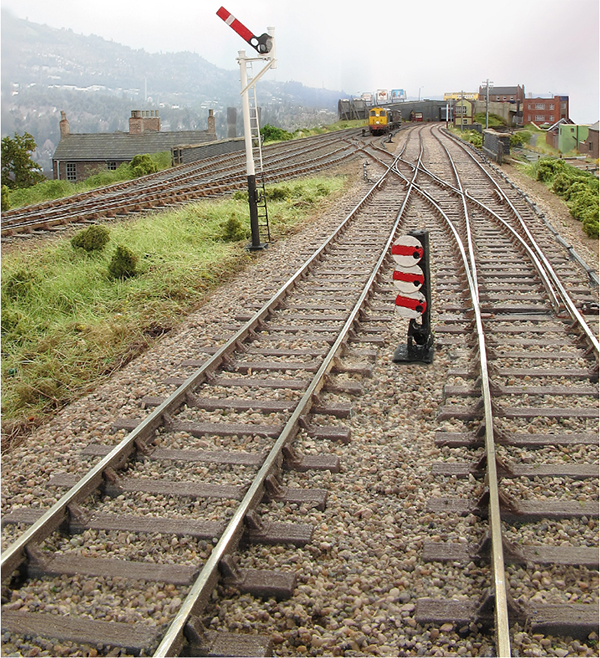 An example of bullhead rail, modelled on 'Black Country Blues'.

The choice between bullhead or flat bottom track on a model railway largely depends on the era and line being modelled. For more authenticity, a degree of research using photographs of a particular line might be required. Bullhead track is available ready-to-use, or in component form in the UK from manufacturers such as Hornby, Peco, DCC Concepts and C&L.