As an owner of 10 Tri-ang operating Giraffe cars, Phil Parker is a big fan of layout animations. Here he picks five of his favourites – all of which you could have, too

We know that model railways have moving trains, but the rest of the scenery doesn't have to be static. Adding a few moving scenes helps add life, and certainly proves popular at shows.

Not everyone is a mechanical genius at adding animations, and you don't need to be, either. There are, and have been, many animated models ready to fit to a layout, or simple to build kits.

Serious modellers will dismiss most of the models on this page as gimmicks, and I can't really argue with that. They are fun though, and if you look at how they work, some finescale versions could be made by those blessed with sufficient skill.

For me though, I like to think that this hobby is fun and if that means a few entertaining gizmos, then I say go for it! 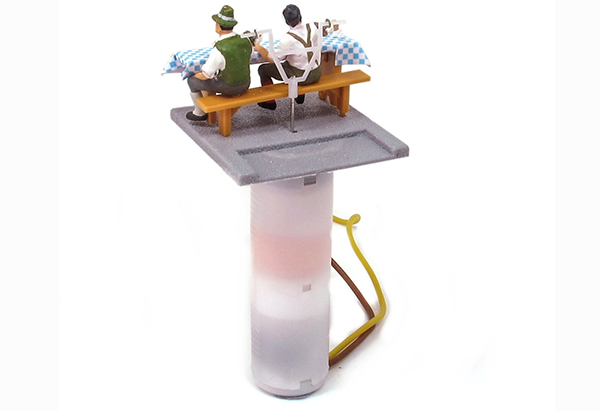 Sitting at a table, these drinkers raise and lower their glasses, seemingly finishing their pints. Produced by Viessmann, they are fixed on top of a tube containing the motor and gears, which move their arms via some plastic cranks out of sight behind their bodies.

Installation of this ready-to-use animated feature is simple – make a 16mm diameter hole in the baseboard and poke the unit through. The baseplate needs to be blended in to the surface but a little green scatter material will do the job. The instructions suggest you need to power it from a 14V to 16V DC power source, but a 9V battery is enough to keep them working for a full day at an exhibition.

Being German, the drinkers are dressed in traditional costume, so if you don't want lederhosen, you'll need to use a paint brush to add a pair of jeans, being careful not to get paint on the mechanism. Technically, these figures are to HO scale at 1:87, so a little small for OO, but as people are different heights, it doesn't really matter.

We used the drinkers in the August 2014 of BRM as part of a beer festival diorama. Since then, they have appeared at several shows and despite their small size, they always attract attention. 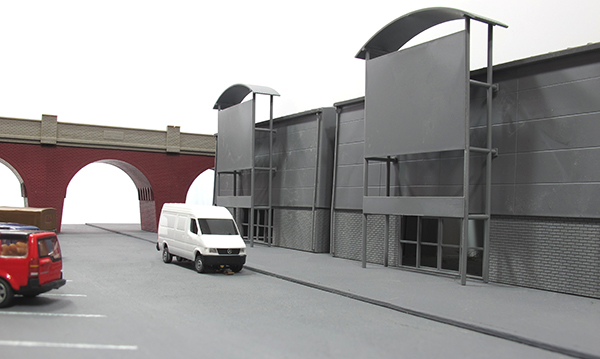 Possibly the best known, and most widely-used animation system, is the Faller Car System. Self-powered vehicles steer themselves around the model roads following a steel wire buried just under the surface of the road.

Introduced over 20 years ago, a variety of vehicles have been made available ready-to-run. Most people opt for a starter set, which contains a single vehicle. Originally, this was a coach or lorry, but sets with a van are now sold as battery technology has improved. Everything you need including a charger and wire for the road is in one pack, which is usually keenly priced.

Single vehicles often cost as much as a starter set, but offer a greater variety for your road. The smallest in the current range is a Mercedes G wagon, but VW vans and even tractors have been produced. There is also a spin-off range of working boats, too.

For the constructor, working chassis and all the spare parts to build your own model can be bought and many people have used these to motorise British prototype vehicles.

While the models move at a realistic speed and can be stopped by an electromagnet operating a built-in reed switch, more sophisticated control is available using the digital version of the system to operate the models to better mirror the way real traffic behaves.

The trickiest aspect of installing the road system is burying the steel wire. This needs to be very close to the surface or the steering magnets will lose their magnetic attraction. A cutting tool to make a suitable slot is available, or you can use laser-cut road templates to lay things out.

Howard Smith recently installed the system on our 'Runcorn Salt Works' project layout and, while it was a little challenging to achieve the result he wanted, in action, the van driving around by itself looks terrific. 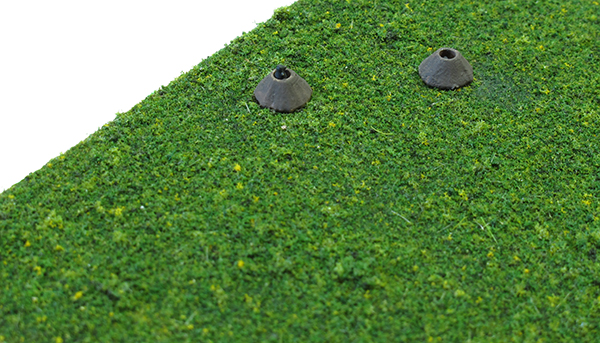 Possibly one of the strangest kits that have appeared on my workbench, the Busch operating moles have a subtle effect, but require some clever mechanical parts to work.

The viewer sees a series of molehills in a manicured lawn. If they watch carefully, out of the top of each hill pops a tiny mole head, which looks around and drops back underground.

Underground, a circular plate with raised cams elevates the moles as it's turned by a motor. Cams on the disk lift the moles that are cast in pre-blackened heavy brass. They need to be a very smooth sliding fit in the plastic molehills, but as long as care is taken, construction isn't too difficult.

A full build appeared in the October 2016 issue of BRM. 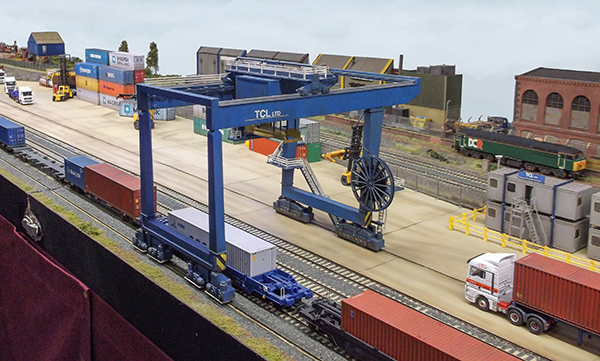 Modern shunting of goods trains doesn't mean re-ordering wagons, it's all about shifting ISO containers between them or onto lorries. Modelling this has always been a challenge. Tri-ang produced a crude, hand-operated crane in the 1970s, but 2006 saw Heljan introduce a working version.

Standing a scale 48ft 6in tall over the top railings, and with girders 93ft 3in long, the crane has a 59ft 6in span with 34ft 6in of clearance underneath – it's an impressive bit of kit.
Control is via a supplied DCC system operating the four motors that move the gantry forward and backward along the rails, shift the trolley from side to side on the top rails, raise or lower the hoist, and operate the container turning mechanism.

Two containers were supplied, but others could be adapted by putting metal strips inside.

At least two exhibition layouts, and doubtless many others based at home, were built around the crane. Troutons, built by the Wakefield club was shown at the London Festival of Railway Modelling, where it drew the crowds, despite a simple track plan. Shunting, even with boxes, is quite the spectator sport. If you want to know more, the layout has a thread on RMweb.

Sadly, Heljan says there is unlikely to be another batch of container cranes produced – the product was ahead of its time and now would be terrifyingly expensive to make. Second-hand examples appear occasionally, but buyers should check that the complicated model is working before purchase. 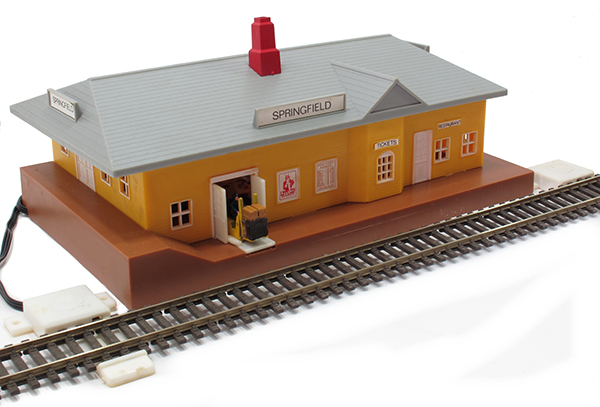 In Great Britain, we tend to associate Hornby and Tri-ang with operating novelties but in the US, Bachmann produced a range of interesting animated items. Operating log cars, a caboose with working guard, a lifting bridge, working level crossing, cattle crossing and a speaking station were all part of the range, as was this model, the Action Depot.
As a train approaches, it triggers a pressure plate, which causes a forklift truck driver to burst out of the doors. When the train passes, he returns to the building.

Inside, the forklift is powered by a hefty, and noisy, double-acting solenoid. You could achieve the same effect with a point motor and a Base Toys stacker truck. The doors in the warehouse need to be sprung to ensure they shut, but that ought not to be beyond an ingenious modeller.

The model isn't in the current Bachmann USA range, but they can be found second-hand. I paid £10 for this and the seller thought he got a good price. Perhaps American animations aren't that popular here, but Anglicising it wouldn't be too hard.

Bachmann has returned to animations with a couple of kits in the Proses range that offer opening doors, but no moving forklifts.

Need more advice? Some of the below articles may help. Also, take a look at the Techniques page for all our latest guides and advice articles.

How to build a burning hut for your layout

How to create a derelict signal box