Here we show you our top six tips on how to model roads, road markings and signs.

Even though most of us probably spend more behind the wheel than watching railways, or even modelling, it’s surprising that roads are rarely modelled well. Given that it’s even easier to research what’s under our noses, this peripheral content for our layouts very much plays second fiddle. Just because it may not be our primary leisure interest, it’s certainly something that can elevate a layout from average to interesting. What’s more, it isn’t difficult or expensive to do. Here we aim to show you a few tips.

One of our main gripes with many modelled roads is the surface, frequently far too coarse a material is used which would be the equivalent of driving over the surface of small boulders on an ‘A’ road. A painted or card surface is a far better option, but we’ve also found that Fab Foam, obtainable from craft stores and online, has a suitable subtle texture to it that can be easily cut, formed to shapes, glued and painted.

We'd recommend spraying the surface of the Fab Foam with a mixture of rattlecan grey primer, satin black and tan Plastikote Suede Touch, to give a variety of grey to brown tones. To avoid the often-repeated error of a modelled road being too dark or too uniform in appearance, look at the road surfaces around you for inspiration.

Tip 2: Getting the right road camber

Most roads have a degree of camber to them to create water run-off. The suggested angle of inclination for this is approximately 5 degrees or a 1 in 20 slope.

Subtly copying this on a model can be a little tricky, but it’s worth trying to replicate. In this case, cutting a slice of the Fab Foam and gluing it to the baseboard before the road surface is laid helps build the crown of the road up.

When the road surface is laid, cut-outs can be made if there are any locations where you wish to model a dropped kerb or lowered pavement surface for drive entrances or pedestrian usage.

Many models feature slabs for paving, but if you look around the roads of today, there are very few paved pavements, something generally only found now in pedestrianised town centres. What we see today is asphalt pavements that are less costly to install and easier for the utility companies to dig up again.

You can trim sections of the Fab Foam to form 32mm strips forming an 8’ wide pavement that can be laid over the road surface. Dab some glue into the square cut-outs made earlier and press the pavement Fab Foam down into the rebate to form a sloped area. 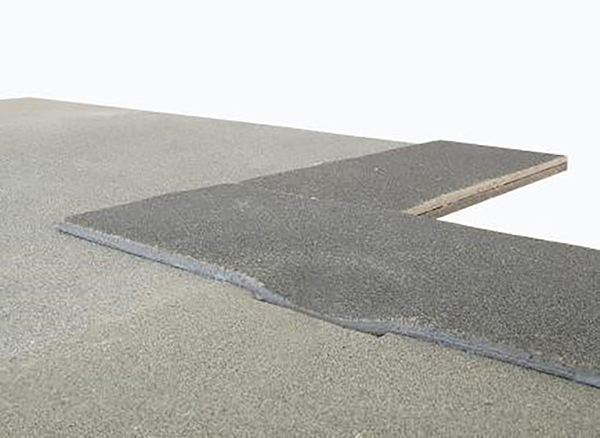 A curved edge to the corner of the pavement can be created with a compass cutter. Kerbing is created with a similar mix of spray cans like the road surface, but a little lighter in tone to represent the concrete kerb stones. The painted plastic strip can be shaped by hand to make a curve, which will assist in laying the kerbing around the corners of junctions.

The sides of the plastic strip that face the road surface and the edge of the pavement have a trace of latex adhesive applied. Don’t worry if there is any excess glue as this can be wiped away and any residue will become transparent.

Want some houses to go alongside your pavements? Our guide on how to build and detail a card kit is worth a read.

Tip 4: Imitating the state of our roads

Look at any road surface and it won’t be long until you’ve found a patch that has been dug up for repair or utility access. It’s this variation in surface, colouring and tone that can elevate the appearance of a modelled road to something much more realistic.

You can create a paper mask from a sheet of A4 self-adhesive label to simulate a filled trench. Tamiya weathering pastes should also be used to dab on with cheap make-up applicators from a chemist (these happen to have a very useful brush on the other end) and then the mask is removed. 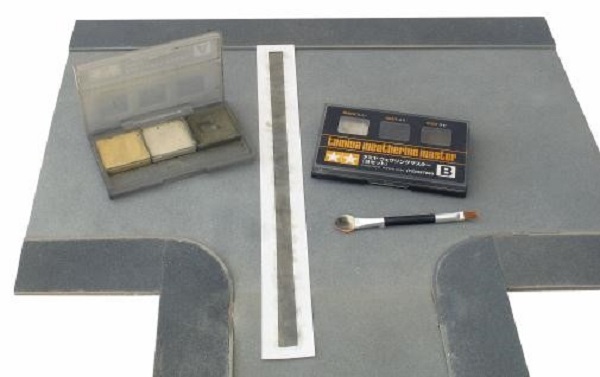 While the weathering pastes are out, you could smear some subtle tones onto the surface to replicate the rubber and dirt which adheres to the road surface through traffic usage. Think which way the traffic would use the junction and treat accordingly. Less is more when doing this.

Useful frets of etched ironwork for roads in older and more modern form are available from Wizard Models. It’s worth recessing these into the road surface by cutting around them into the Fab Foam and compressing the foam down and placing the drain cover or manhole cover below the level of the road indicating proper drainage and years of re-surfacing.

Potholes appear after heavy usage or winter periods. These are easy to replicate in the Fab Foam surface by picking at the road surface with the pointed end of a scalpel and treating, slightly tamped down below the road surface and with darker tones added to give some depth to the annoyance.

Weathering is an important part of modelling, here is our top tips and techniques for weathering model trains.

It is possible to draw in software concentric circular sectors and straight lines to make yellow lines of the correct 100mm width and 150mm spacing set away from the kerb by 250mm. An A4 sheet of self-adhesive label is printed with a variety of yellow tones, this could then be hand cut but we’d recommend a Silhouette Cutter to make a neater and faster job of it.

Longitudinal white lines in the centre of the road are used as warning lines to indicate areas of potential hazard. The length and spacing of these are defined in the Traffic Signs Manual. In this case, white lines should be 4.0m in length with 2.0m spacing and 100mm in width as it is an urban road with speeds of 40 mph or less.

Away from hazards, shorter lines with increased spacing can be used, the parameters for this are defined in the Traffic Signs Manual Chapter 4 – available free online.

A simple mask can be created, or you could use masking tape, and the weathering pastes used once again. The paste gives a clearly discernible but subtly varied finish to the line. If you look at most white lines, very few are pristine white.

A more complex mask is needed for the lines and warning triangle for the give way arrangement at the end of our side street.

If you’re new to railway modelling, our top tools for beginners article has all the details of the essential kit you need to help you get started.

Up until the implementation of the Road Traffic Act of 1930, there was no national specification for signs, the first hazard signs were introduced by cycling bodies and with the advent of the car, the AA and RAC produced signs to point the way for motorists. The Motor Act of 1903 did introduce the usage of some signs, but their usage appears to be without specification.

The landmark point for the design of road signs as we are all familiar with them today came in the 1960s. The design industry magazine ‘Typograhica’ published an article in 1961 illustrating the chaos of signs, this led to the government awarding a contract to Jock Kinneir and Margaret Calvert to design new signage for roads, following on for their successful signage appearing at the dawn of the motorway era with the opening of the Preston bypass in 1958.

The style of signs we are now familiar with would have gradually appeared post 1963 and increasing to the point that their usage was fairly universal by the 1970s.

Once again, the Traffic Signs Manual is a good reference, this time download Chapter 3. This chapter covers a multitude of signs and information regarding their size and positioning; it doesn’t cover every form of warning sign, but a full list can be found by searching for ‘Highway Code Traffic Signs’.

An easy way to create a Give Way sign on the diorama is creating from a photograph of the sign, printed onto photo paper, cut out and mounted onto a brass rod, which fits into a tube embed into the Fab Foam. This would allow the signs to be interchangeable for eras if desired. Most commercially available signs and posts are simply that, a sign on a post, but observation shows that many warning signs are lit, particularly in built-up areas, so a representation of the light hood is mounted onto the post, which had angle of 90 degrees formed with a pair of pliers.

If you do model some roads in the near future - make sure you let us know how you get on via our social media channels.