Water is everywhere, we are surrounded by it and it is the necessity of life. In model form, though, it can appear daunting to recreate.

No English model railway looks totally complete without some form of water on display, whether that be a river, stream, lake, garden pond or even just a puddle. When designing my latest Cakebox Challenge I decided that a small stream would form the centrepiece, so here is my simple method for making one that gives the feel of a rivulet meandering through the countryside and disappearing into the distance.

The first thing is to decide the time of year you are depicting, as the colour of the water will appear to vary through the seasons and the type of light falling on it will change its appearance. In my case January was elected, which explains why the diorama is called ‘Cold!’

The base for my Cakebox Challenge is 10mm MDF. When painted it gives a slightly rough texture that was ideal for what I needed to catch both the light and feel of movement. After deciding the rough course of the stream, the base was painted in Vallejo Gunmetal Grey which, when viewed with light reflecting off it, gave a lovely cold shiny feel. Four coats were applied to give a dense finish, and the paint was left to dry. The railway embankment is 50 x 25mm PAR softwood and the bridge retaining wall is from the Wills range of random stonework, which I decided to paint now as I reasoned it would be easier to do than later when the scenery was in place. The railway bridge is scratch-built from plastic and the support plinths are balsa wood. 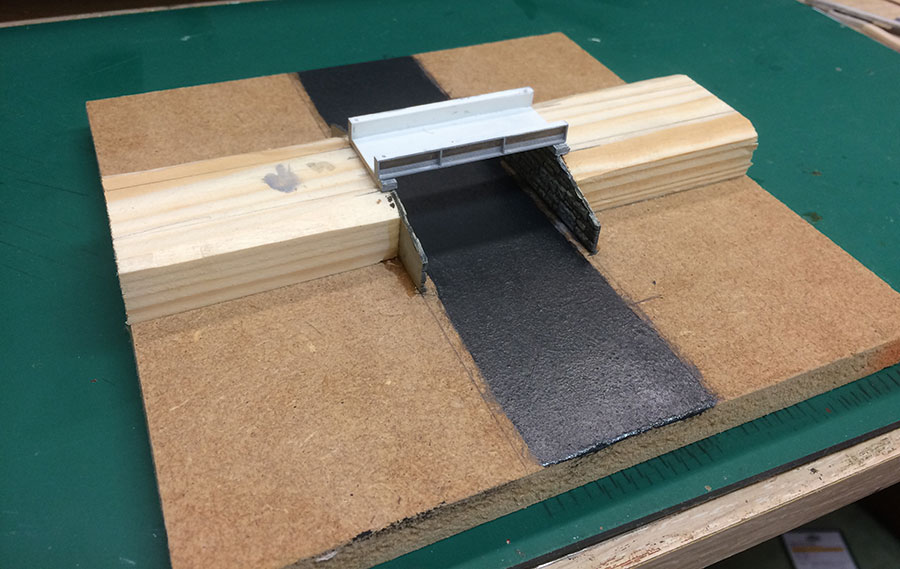 The next stage is to imitate moving water. Basically, this is ordinary PVA adhesive, but I would recommend using the stronger product called PVA Building Adhesive rather than the lighter craft versions. Using a wide brush, the glue was added to the stream in a dabbing movement – do not brush it on, as you won’t achieve the rippling effect you are after. Be careful not to go over earlier sections because you can form bubbles and unnatural ridges in the glue, especially when it has started to set. 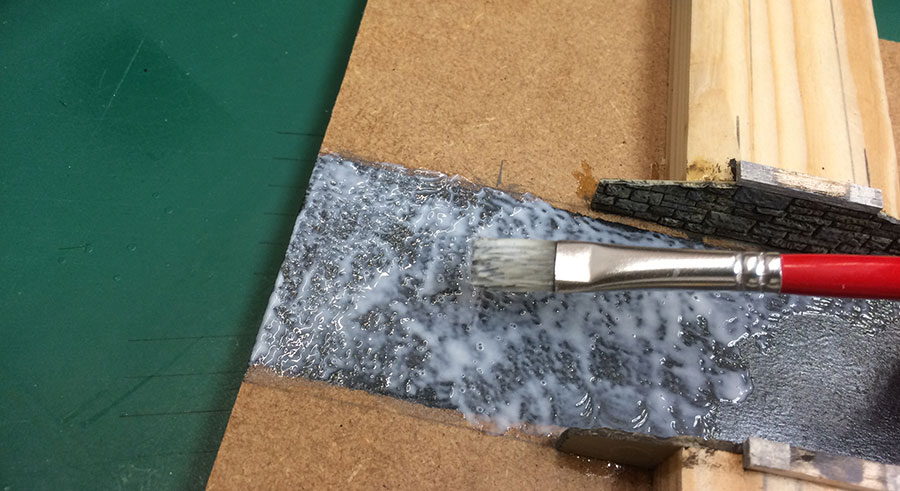 I applied three coats of PVA, allowing the previous one to dry thoroughly overnight beforehand. If you start too early in the process the newer coat will sometimes reactivate the previous coat, which spoils the effect. 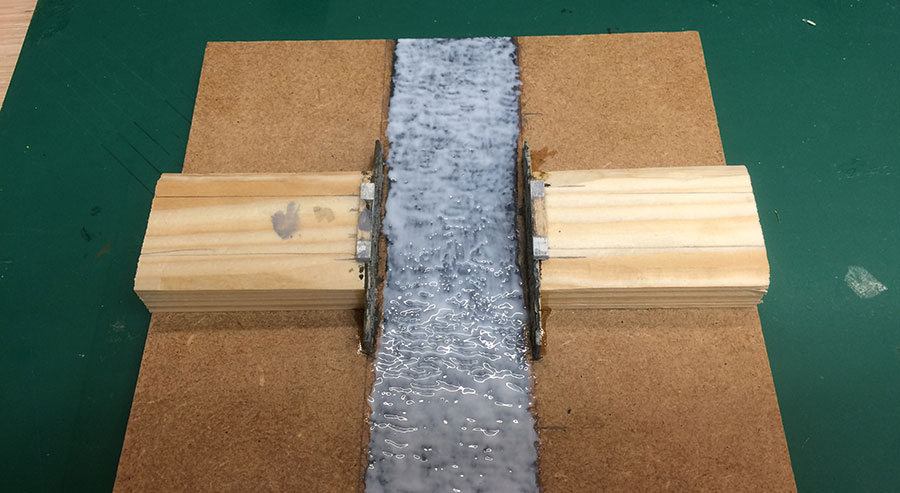 For the stream banks I used 2mm greyboard cut into 50mm wide strips for ease of handling, and to the length of the base with the water’s edge marked out in pencil. I then folded over and bent the section along this line. The cakebox base is only 8” long, and I found that this was probably the longest length the card could be bent without distorting. If longer sections are required, just cut shorter lengths of card and butt them together. Bending the board backwards and forwards, I was able to form a tear line, which I basically ripped apart. This gave a wonderful rough bank effect, which was further enhanced by ripping layers off the top to give an uneven surface.

The whole edge was sealed with PVA glue to prevent it from delaminating later when the scenery adhesive was added. It was then painted with Vallejo Flat Earth. 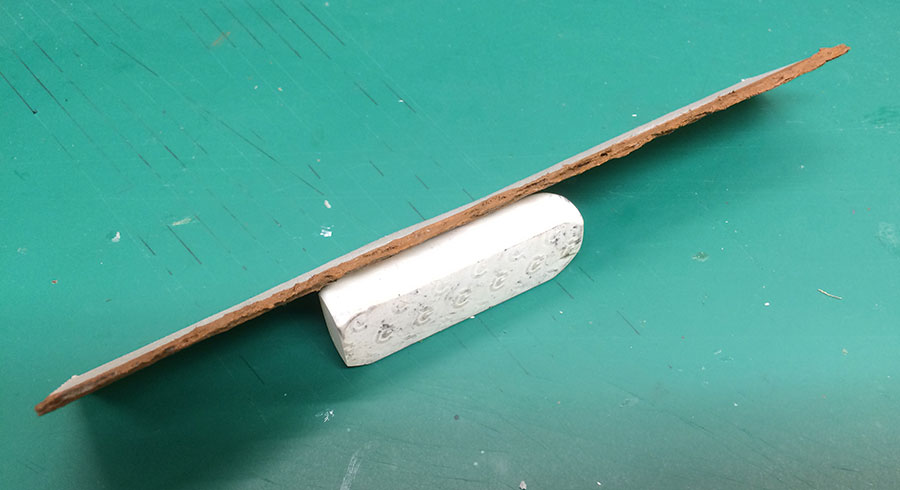 The banks were added to the base, cut around the retaining wall and laid to give the line of the stream. I also decided to form a little island as, even at this stage, I had in the back of my mine the idea of a tree trunk bridge. Uneven bank edges can be formed with very little effort, giving wonderful underscored areas and recesses highlighted by shadows.

Another three coats of PVA were added to the stream, being careful not to get the glue all over the card banks. A small detailing brush was used to apply the glue by the bank, again using a dabbing movement. Be patient at this time, because the more layers you add the better the surface will look. This technique works up to the point where additional layers will start to flatten the surface. I have found that six layers is usually acceptable and still provides the effect I’m after. 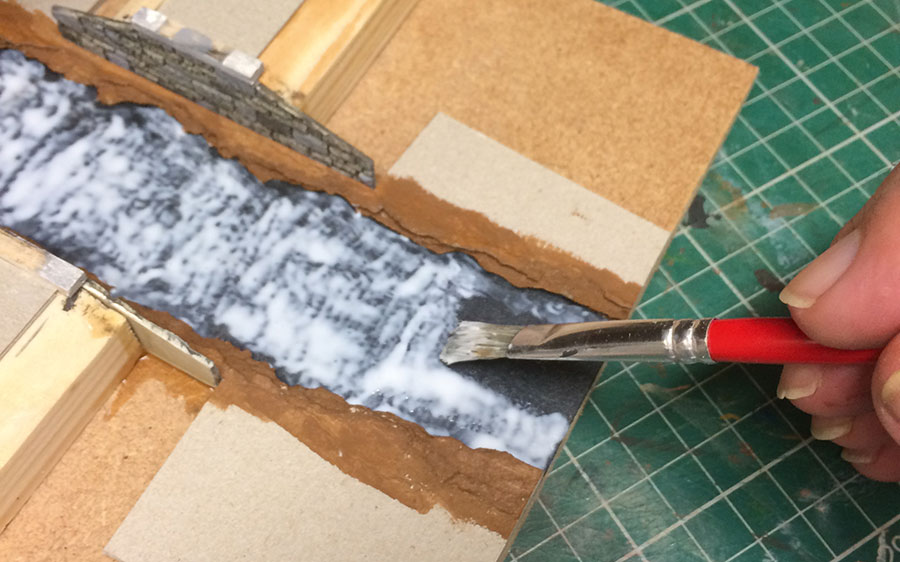 Once everything is dry, the detailing of the stream begins. Random rocks are laid to give the effect of being washed down by the water over many years. Also, to further improve the appearance, a few sagebrush branches are added as if washed up against the stones. Before starting, it is a good idea to decide the flow of the steam and then look online at pictures of small streams and rivers for inspiration. The rocks I use are from the Treemendous range called ‘Limestone Scree’ in grey. They are coarse grade ground cork of different shades and sizes. The next stage is the fiddly bit, which is individually selecting and placing them in the stream. 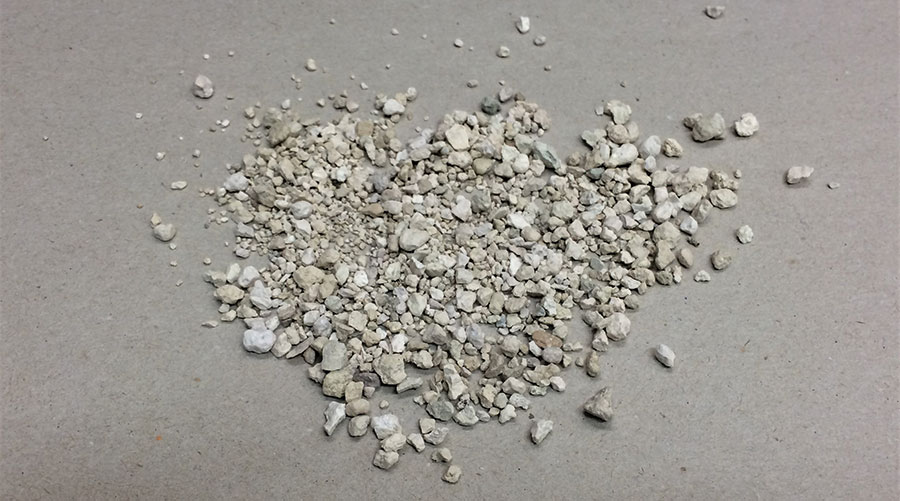 Using long-nosed pliers, each stone was picked up, dabbed in PVA and placed on the stream. I was careful not to get the glue everywhere and placed them in a realistic setting – online photographs are a good guide for this. A few tree branches have been added from my collection of sagebrush odds and ends. Again, bear in mind the flow of the stream and you can see where the branches look like they have flowed along and got caught by the rocks. Be careful not to block the stream, otherwise you will end up making a dam! 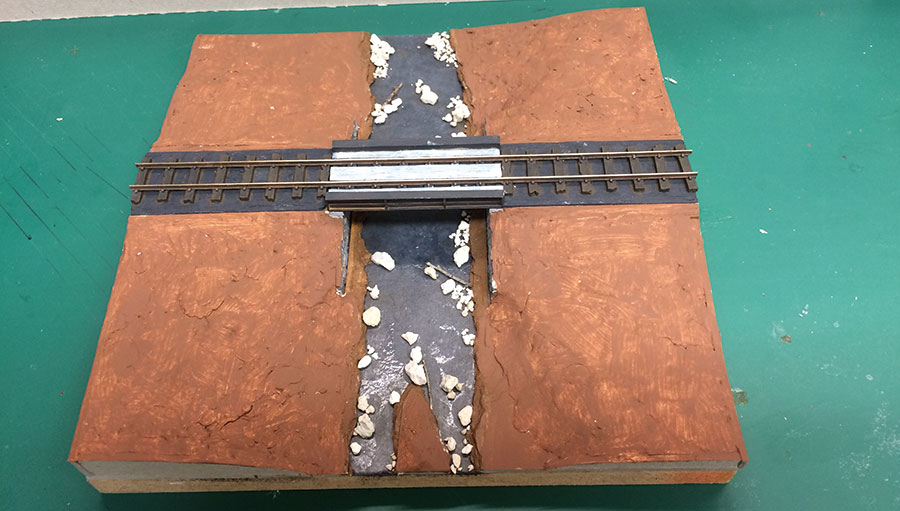 The railway track and bridge are removable, which allows me to work on the stream and scenery more easily.

This early picture shows how, by moving the board to catch the light, the effect of moving, dark and cold water can be modelled easily by just using ‘dabbed on’ PVA glue. Static grass has been added to the water’s edge. However, leave the bank clear in some places to indicate bare earth, which would be visible where the flow of the water has prevented vegetation growth. To these bare areas I applied some Treemendous earth powder to give a more uneven natural surface.

The rocks, though different shades, were too ‘white’ for me. I applied a wash of Roof Dirt from the Lifecolor range to reduce the starkness and highlight the ridges/unevenness of each rock. I have also painted some Vallejo Olive Green to the tops of some of the flatter rocks to look like moss growth. 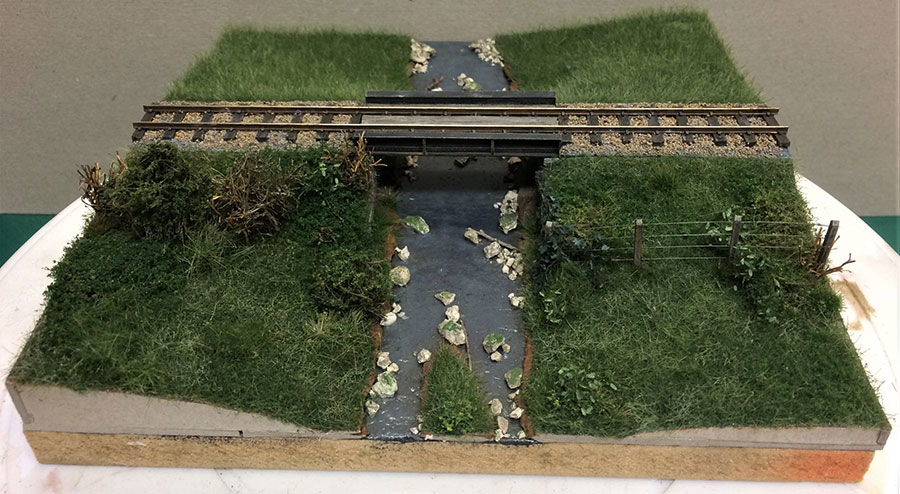 Other effects can be made easily. For example, the main brook on my layout ‘Little Muddle’ is just a piece of Perspex painted with a dirty green/brown mix on the underside. The banks are modelled using fibreboard in this instance, as I wanted taller banks. 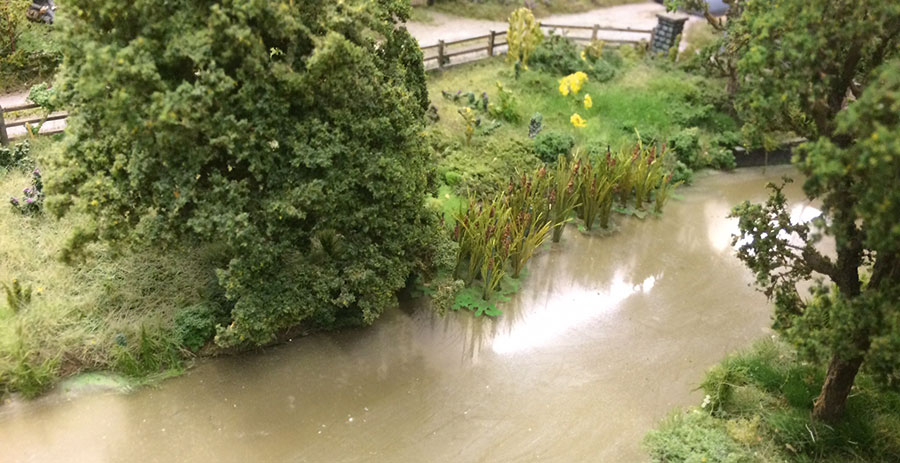 This harbour uses a version of the methods used for Cold! although with a different base colour of shades of brown/blue/green. The PVA was applied with a wider 1” brush and the glue dabbed in a line across the base to give a continuous ripple effect working backwards and forwards across the board working back towards myself. 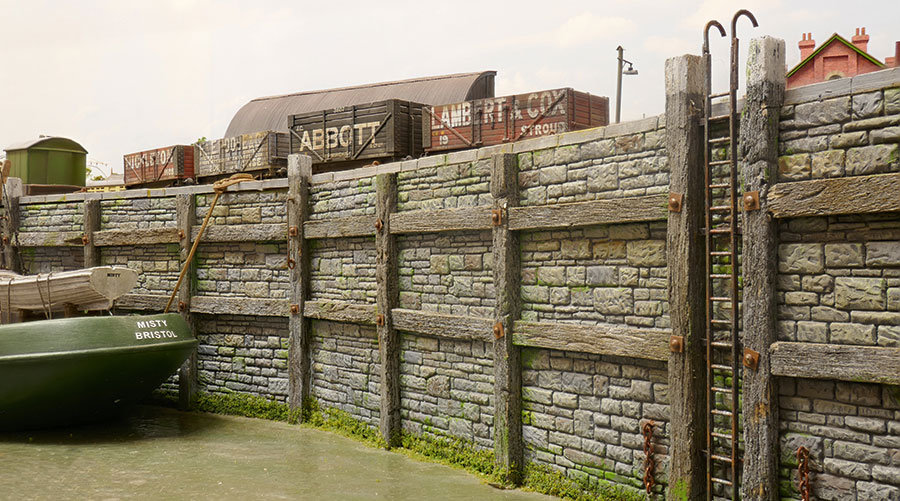 Once fully assembled, and perhaps more appropriate to the title of the diorama, Cold! is treated to a light snow shower. 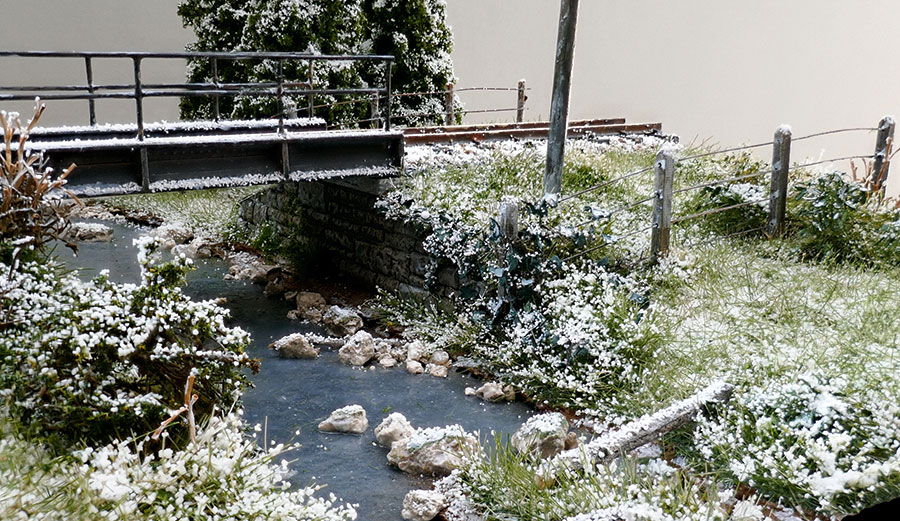