Phil Parker sums up the first episode of the news GMRC series, a show promising many, many disasters...

Formed from members of the Corby & District Model railway club and ably assisted by a couple of other enthusiasts. Ages range from William (17) to Mike (72) who built his first kit at the age of 9. Team captain Francis hopes the mix will encourage creative and fresh thinking. Proper Preparation Prevents Poor Performance - according to their motto.

Named after their local pub, The Fancott Arms, which they frequent, the team help operate a miniature railway in the grounds. Team captain Ron is a real enthusiast with a OO gauge garden railway at home.

Possibly the brainiest team in the series, these scientists spend their days searching for cures for cancer. Only captain Chris Williams has any railway modelling experience, but only a little. They have T-shirts with their faces in cartoon of a train though.

The Theme: The Restless Earth

Kathy wants the teams to "make the Earth move" (groan) while Steve seems more worried that he's lost control of his bifocals before reminding everyone just how important perfect running is in his best, stern voice.

Corby plan a volcano, mining disaster, landslide, and since they watched the last series, dinosaurs in a tar pit. I like dinosaurs. Why don't more layouts have them?

The Train Set will be building Beagletown, a sleepy town that doesn't know what's going to hit it - just like Tim as the captain is keeping his plans a secret from him. There will be a volcano though, is this "The Great Volcano Challenge" all of a sudden?

Fancott - A bit political this one, it's all about fracking (James explains this in a burst of science) which causes an earthquake, a sinkhole to open up and a lake to drain. Bad news for the residents of the village of Nimby.

Corby making use of some proper old-fashioned modelling techniques. Set-track is laid and tested. Trains run. Steve is happy.

The Train Set decide to get stuck in with their scenery first and are soon stapling chicken wire to formers to make a massive volcano. In the battle of the fiery mountains, if size matters, they are coming out on top. Mind you, it all depends on the acres of paster bandage drying overnight, not something you can be certain of, as many of us know to our cost.

Just before the adverts, I get my first glimpse of one of the shots taken at my local club on one of the layouts. Our P4 model, "Clarendon" makes it to the screen, for about 3 seconds...

After the break, looking down from the gallery, Tim and Kathy are concerned that the Fancott model is looking a bit boring. While the others are throwing up volcanoes, they are resolutely "flat earth".  Will this cost them valuable marks?

Worse news though, it turns out that presenter James doesn't like biscuits. Tim tries to tempt him, but he just says no. How is this deviant allowed on our screens?

The teams are allowed to bring in six features built and hopefully tested, before the show. Last time this caused controversy when the Missenden Modellers bent the rules. Will the judges be harsher this series?

Corby have brought their volcano, or at least the innards of it which seem to consist appropriately enough, of a modified lava lamp. There's also a landslide based on a tea towel and powered by fishing line.

The others? No idea, we don't see them.

Back at the workbench, The Train Set are hard at work creating an excellent snaking stream using resin. Apparently, it's the first time the captains has done this, but after watching hours of YouTube videos, he has developed a "protocol". I think that's science speak for looking at the instructions, or at least working out what they should be when you lost them. I'm pleased to see that we have more dinosaur action too, as he builds some scale fossils into the cliffs.

As the judges sit down to discuss progress so far, we have a new feature for this series: 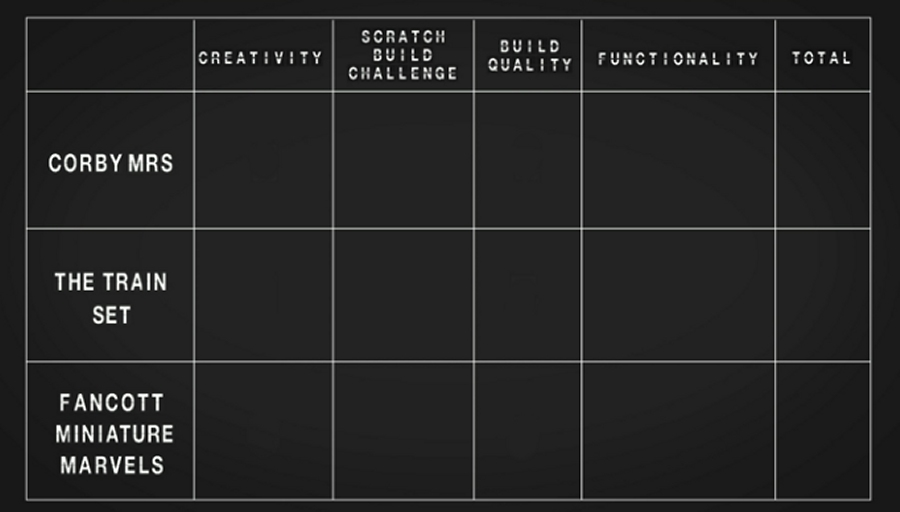 A scoreboard. Yes, it seems that the judge's thoughts won't be a complete surprise this year, scores will be awarded for various aspects. Presumably, that's why they have been issued with official-looking clipboards.

All the elements of a good night out for Stern Steve - a pot of hair gell, some pre-popped party poppers and a tutu.

The Train Set paint their tutu in firey colours and fix it in the top of the volcano, which Kathy points out means it can't be seen on judging day. The hair gell is dyed pink, which will at least stop Steve from pinching it back, and encased in barrels made from the party poppers.

Corby also use the poppers as flasks, but Kathy doesn't like these so much. The gell ends up in the tar pit and the tutu is coloured in smoky colours and stuck to the top of their volcano. At least it's visible, keeping Kathy happy.

Fancott use the gell tub as a water tower, the poppers are smaller water tubs and their tutu is repurposed into smoke, a hammock and goal nets for a football field - all of which gets them the win.

Craigs earthquakes are tested and need a little adjustment. They aren't bad, but very much a work in progress. No matter, James is there with a "Breaking new ground" pun, which will have made everyone feel better.

By the end of day two, Steve is still banging on about his love of traditional techniques while Kathy seems to be making a play for the role as the harshest judge with some pretty scathing comments. It's all to play for.

There's a Hornby advert in the break!

Day 3 and things aren't going well for The Train Set. Leaving the trackwork so late means it's not going smoothly. Much picking at the ballast and the wiring isn't working, something Helen finds particularly shocking when she touches the rails. At least she has the sense to move away when "repairs" are made to a point using an electric jigsaw. Don't try this at home kids, it's really not a good idea.

Over at the Corby layout, the volcano is broken and the team are hacking their way through the plasterwork to try and repair the lava lamp device. It's a major feature and the layout needs it.

Ballast is causing trouble for Fancott too. It's scruffy, much to Steve's annoyance, and keeps derailing the trains. If there is one thing we learned last year, it's that the trains must run.

The fracking tower works, or at least the screw in the middle rotates. There's a noisy crowd of demonstrators including some trying to storm the site and being chased by the police. The sinkhole sinks impressively and a van drives straight in. Fishermen find themselves marooned on a rapidly emptying lake but as the train rushes to rescue the residents of Nimby - it breaks down!

A Class 37 (they are keen to identify the classes) emerges from the firey tunnel. The earthquake is now working properly, and James finds it "quite sensual". I told you he was a deviant, no good comes of not liking biscuits. Back at the volcano, a train from the lava mine emerges (after a knock on the baseboard) complete with wagons full of glowing material. Sadly, the technical issue with the volcano hasn't been resolved and it's extinct. Better news from the geyser which is spectacular, the landslip which slides perfectly, and for lovers of wordplay, the Tirpitz is sailing in the tar pit.

The local train service derails on the point "repaired" with the jigsaw. I knew that wasn't a good idea. The dinosaur park geyser is a success, for relaxation, there is a curry smelling spa power by (appropriately for scientists) dry ice. For a moment, the earthquake fails but suddenly it's OK and a small hut impressively cracks apart. The train is tried again and derails, apparently deliberately as an ambulance rushing to scene collides with it. The big success though is the volcano which bursts into life once everyone has donned safety glasses.

All those traditional techniques paid off with a model that, apart from the volcano, worked. The animations were fun, there were dinosaurs and their experience paid off with quality construction. There were some great puns in the company names on the buildings too. 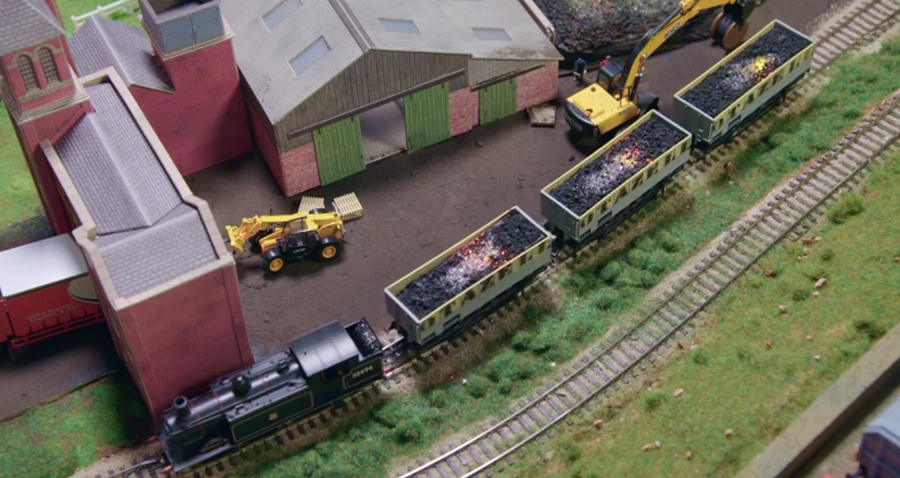