This week, the teams are Globetrotting.

Team Tonbridge – Captain Stuart is 24, describes things as “sick” and plans to take his team clubbing if they win. The layout sounds very conventional and Steve's concerned that they haven't really taken on the idea of globe-trotting, only getting as far as the channel. Katy's not happy either, she wants more from the model.

The Basingstoke Bodgers – Easily the most relaxed team standing cradling mugs of tea but wearing Santa hats. Captain John explains the layout has a festive theme and Kathy is concerned that Santa doesn't have a sleigh, but it's pointed out that as he'll be in the pub, it's safer on the back of a train.

Team Steampunk – The “railway renegades” dressed in full steampunk gear and looking like they mean business. A team of modellers, only captain Laurie is a railway modeller, he's going to have to teach them some skills. They plan a time travel layout with dinosaurs and spaceships.

Team Steampunk is straight out of the blocks with moulded foam ballast that is incredibly fast to lay, far easier than the loose stuff the other teams use and they have trains running in a matter of minutes while the Bodgers aren't at that stage by the end of the first day. 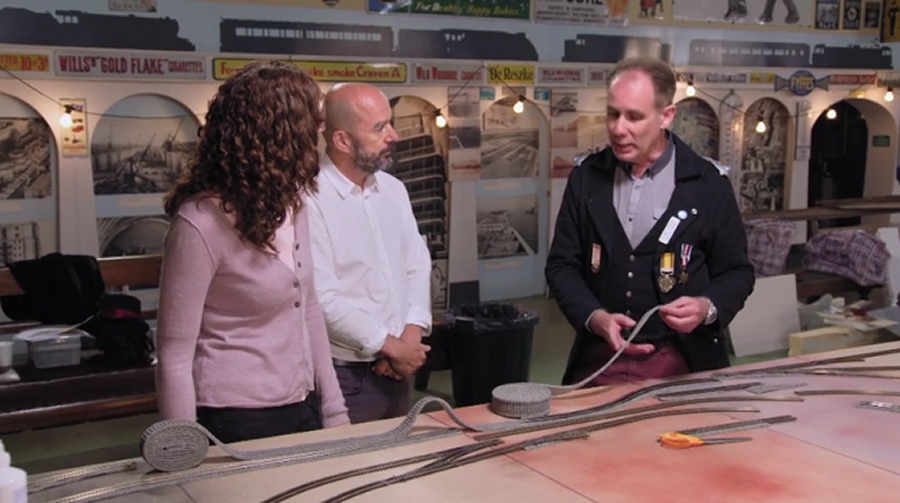 Over in the Art Room, Tonbridge's Matt is airbrushing a dozen beach huts but finds himself diverted to help build card kits as with 20 to assemble, time isn't on their side. Sadly, he's never actually built a card kit before and describes it as a complicated jigsaw where all the parts are round. To speed things up further, the team decided to model in low-relief, cutting the buildings in half and hoping to chop construction time the same way, but will it work?

For Basingstoke, the challenge is making 12 elves for each wagon in the train – cue many “Elf'n'safety” jokes, which we will quietly ignore...

Back at the layouts, the Bodgers demonstrate a Sphinx tunnel mouth, perfectly scaled for OO track and complete with flashing eyes. Tim is impressed, although he might just have been hypnotised by the scenery. 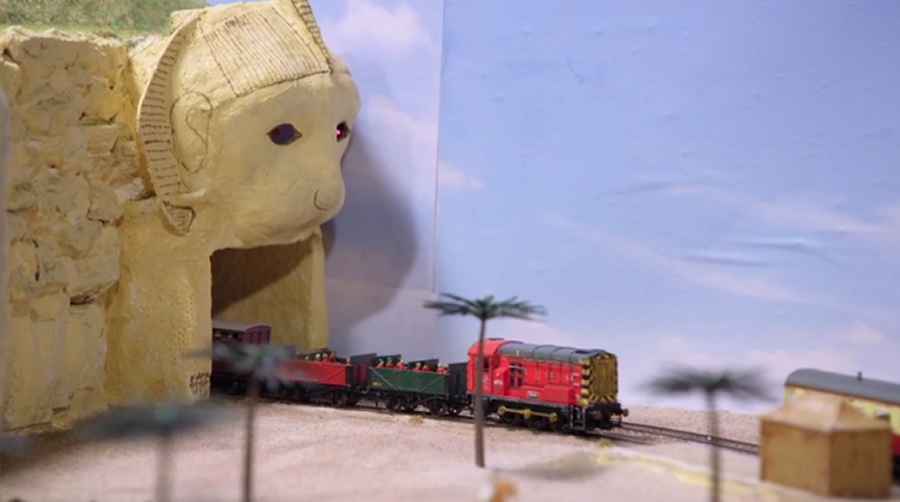 Tim's been digging around under his sink and produces a plunger and a sponge. John from the Steampunk team is confident, he's a special effects guru and well used to doing this sort of thing.

Tonbridge Bryan is turning his sink plunger into a lighthouse to go with their water features with a lot of scissors and sticky tape, which he can't seem to find the end of. Sadly, they forget about the sponge until about ten minutes to the end and make it a children's play area with the wrong colour rubberised surface. Kathis is embarrassed by this.

For the Steampunks, John is building a rocket (Plungerbird One) by adding fins and a gantry. The rest of his team stick gears all over the sponge to make a “time travelling clock” and spray it in metallic colours. Apparently, it controls the time travelling train. Kathy likes the rocket but isn't impressed with the clock. 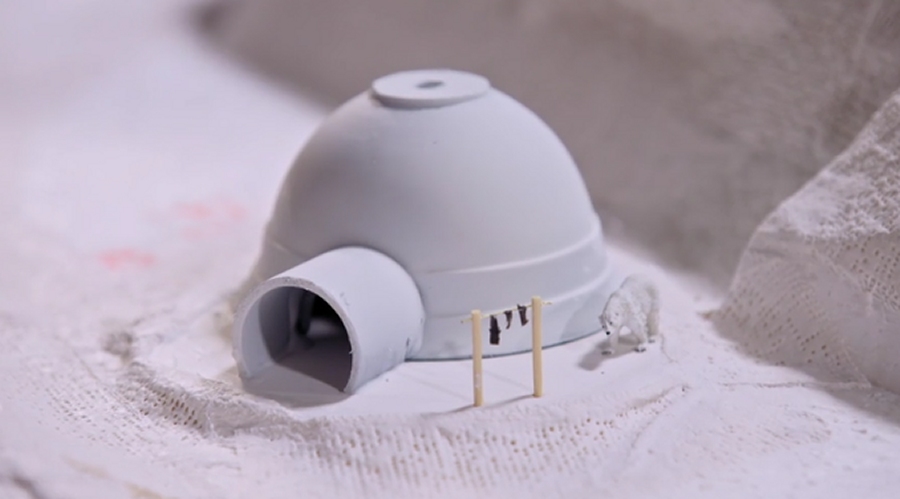 For the Basingstoke's North Pole scene, the plunger base becomes an igloo complete with seal blubber hanging on a washing line – a detail never previously modelled on a railway layout. The handle becomes Cleopatra's needle and the sponge a bouncy castle behind the pub.

The igloo wins the challenge for John and the Bodgers.

Back at the layouts and Steampunk Laurie is struggling and wondering if he needs tablets for the stress. One team member pours sand over the baseboard, burying all the track and has to be told to sweep it up again. Steve sternly suggest that some delegation is required.

Matt is still struggling with the buildings but he's determined. “I'm not one to back down” he says, although the strain is showing as he looks at the beach huts still waiting for him.

Finishing touches are being applied. Laurie is delegating more and John is being forced to deliver with a rotating spaceship and moving dinosaurs. They produce a clever sound recording device and the team start making suitable noises.

Matt's back on beach huts and left with the task of picking flags for the roof of the beach huts. Meanwhile, they are struggling to get the swing bridge to spin properly. Stuart tries to sound confident, but he's not.

The bodgers use a servo tester for one of their animations, rotating Santa in and out of the pub. It's clever but a last-minute setback hits their point work with ballast in the blades stopping them operating reliably. “It's not working properly, you're going to have to get your skates on.”, advises Judge Steve.

Finally, time is up. Steve wants to be transported to snowy peaks and sunny beaches. Presumably, he's packed his budgie smugglers. 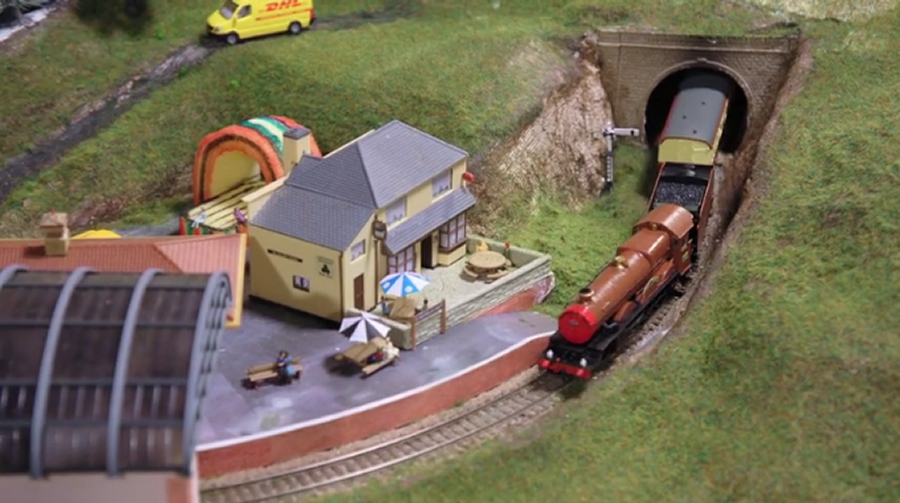 Basingstoke Bodgers run “Rudolph Castle”, a brown GWR Castle loco with red smokebox. It disappears into a tunnel and suddenly there is an N gauge version which looks like the same train a long way away. This disappears to be replaced by the OO version taking Santa to the pub. The elf train performs the same magic and both end up on Santa's sweetshop complete with flashing lights and bubbles. Judge Steve is made to wear a Santa hat. 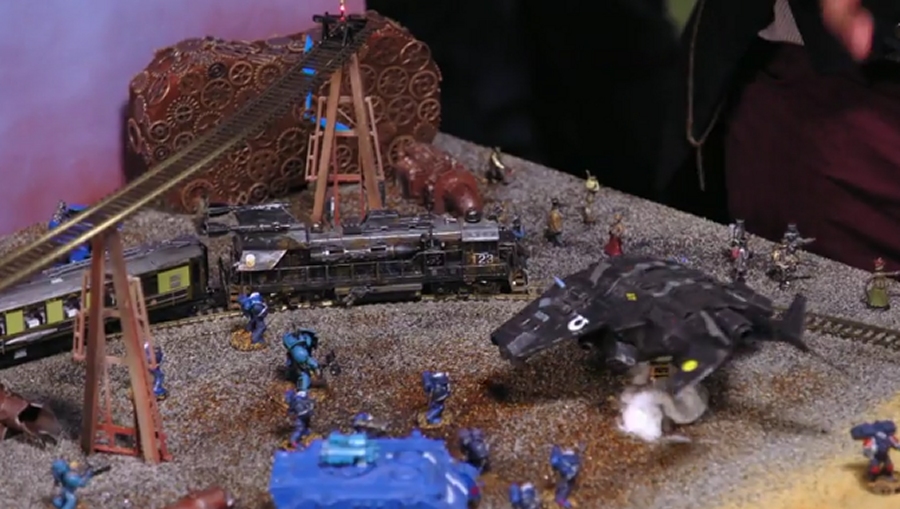 Steampunks like to run trains fast. Very fast. Their train travels in time and space, visiting the battle of Waterloo with working cannons, pre-historic eras where it's attacked by a T-Rex, a desert planet populated by aliens and even a conventional UK preservation scene, although the steampunk locos aren't your usual fare. 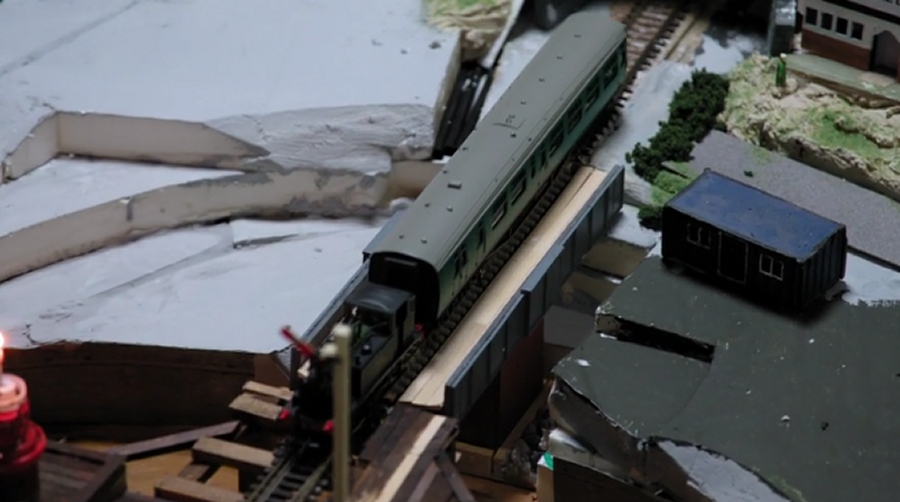 Tonbridge run a single train from one end of the layout to the other. It struggles with the swing bridge and sadly derails in both directions. There is a clever funicular railway though and Tim gets the chance to go all nerdy with the appearance of a submarine in the bay.

Kathy likes the Steampunks out of the box thinking but they could have gone further although the animations were great.

The Bodgers tick all the boxes for both judges but Steve wasn't happy about the hat, but it doesn't stop him trying his hand at an elf joke.

Tonbridge's problems with the bridge are mentioned and it wouldn't have been missed. Steve likes harbour stations but felt it needed more time.