Nuclear materials are hazardous. Little wonder then, that the flasks used to carry it are well-shielded and hence, heavy. The majority of nuclear traffic in the UK via rail is handled by a fleet of FNA bogie wagons or two-axle PFA flat wagons. Spent nuclear fuel from Royal Navy submarines at Devonport and Rosyth, however, has been carried to Sellafield using these eight-axle wagons, constructed in 1998. The wagons could also be seen on trips taking fuel from the experimental naval reactors at Douneray to Sellafield. Occasionally, the wagons have been seen at Eastleigh for maintenance and tyre turning.

MoD flask trains were handled by EWS until 2006, at which point DRS was made responsible. When carrying material, the vehicles are paired with Direct Rail Services Mk. 2 coaches to transport armed guards for security. Pre-2006, these were Mk. 1 QXA Inspection Saloons in EWS maroon/gold or Regional Railways liveries. 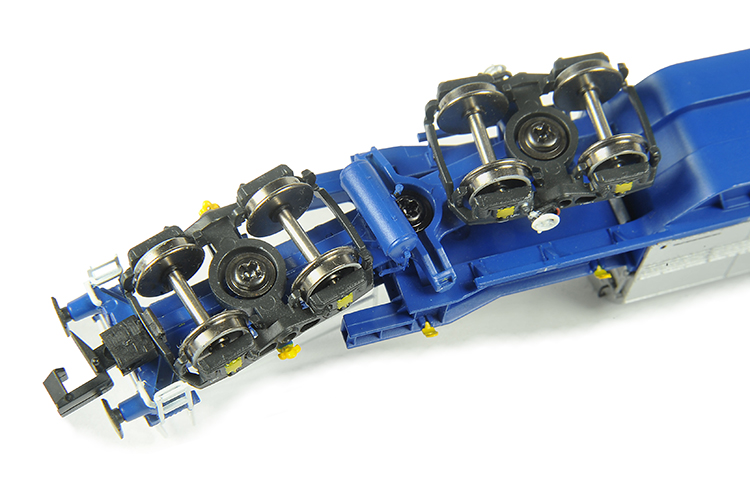 Beautifully presented as a twin-pack, the two-wagon combination makes an impressive sight behind a variety of readily-available motive power. A design quirk with the presentation box is two magnets, each concealed behind a UN radiation symbol, offering a satisfying snap-shut to the book-format packaging. The models are well-protected, each inside a plastic clam-shell with outer sleeve, surrounded by foam. Each of Revolution Trains’ N gauge models in the packaging measures 165mm over buffers – equivalent to two 16T mineral wagons in OO gauge.

Behaving like a snake, once on rails the wagons are free-running and bogie-mounted NEM coupling sockets offer modellers the opportunity to remove the rear-most coupling if running it as the last wagon in a consist, or change the coupling type for a more discreet appearance.

Detail is more apparent on these wagons, highlighted with bright paint for health and safety reasons. As such, the injection-moulded plastic handrails and inner-most bogie handbrake wheels are painted white, with lifting eyes and wagon anchor points highlighted in yellow. I feel the yellow of the bogie axleboxes lacks punch – simple to rectify with a paintbrush – but livery application and detail is otherwise flawless. 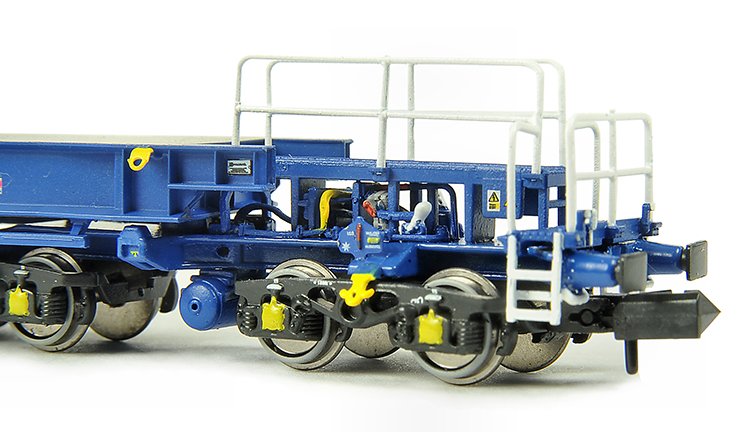 The wagon well is substantial and despite lacking detail to its top – as per the prototype – this is off-set by the admirable side- and under-frame detail. A realistic impression of the tread-plate is visible, though a personal highlight is the air equipment, with its pipework, reservoirs and distributors. With a choice of motive power used, from DRS Class 20s, 37s, 47s, 57s, 66s, 68s and 88s, modellers can consult the manufacturers’ website for a consist guide. Highly-recommended.