Howard Smith feels this first RTR locomotive produced by Rapido Trains for the manufacturer is very attractive, particularly in the Caledonian Sleeper livery received for review.

If anything, the Class 92 locomotives are something of an emotive swansong. The final locomotives to be constructed under British Rail, the Class of 46 entered service on the cusp of privatisation, securing BR’s pledge to contribute to traction for the newly-opened Channel Tunnel. To date, the dual 25kV AC / 750V DC locomotives remain the ‘electrics’ with the highest tractive effort to have entered service in the UK.

Assembled by Brush Traction in Loughborough, using components from ABB Asea Brown Boveri – it having acquired the transmission and distribution assets of Westinghouse Electric – the locomotives used a modified bodyshell design from its recently-constructed Class 60 locomotives. This wasn’t unusual for the manufacturer, who’d carried out a similar feat with the production of its Class 56 locomotives, modifying its previous Class 47 bodyshell design. As with its Class 60s, construction of the monocoque stressed skin bodyshells took place off-site by Procor. In-keeping with a move away from the angular designs of the 1980s, the Class 92s adopted a jelly-mould style front, with Wipac cluster lights located behind an outer lens cover. Their exterior design remains as fresh as the day the first locomotive entered service, almost 30 years ago, in 1993. 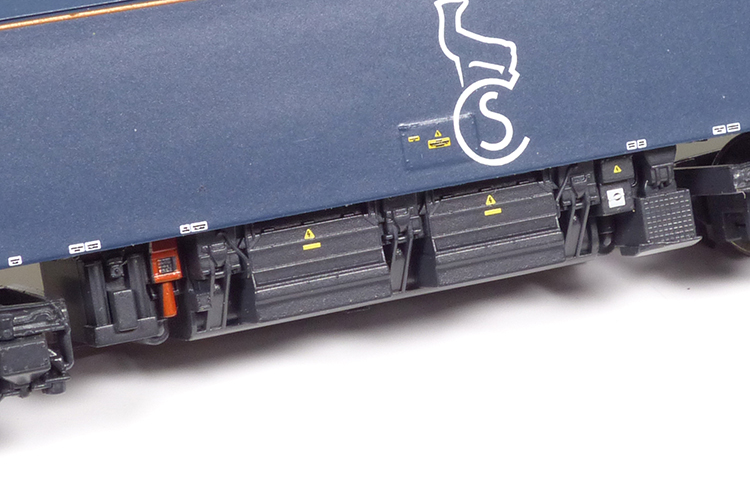 Of the locomotives constructed, eight have been exported to Romania and five to Bulgaria. 17 are owned by DB Cargo UK and 16 by GB Railfreight. Not all of those located in the UK remain in service, some being used for spares.

We were sent a sample of 92023 in the very attractive ‘midnight teal’ Caledonian Sleeper livery, one of seven GBRf locomotives repainted to work the overnight Scotland-England services, following Serco’s winning of the franchise. 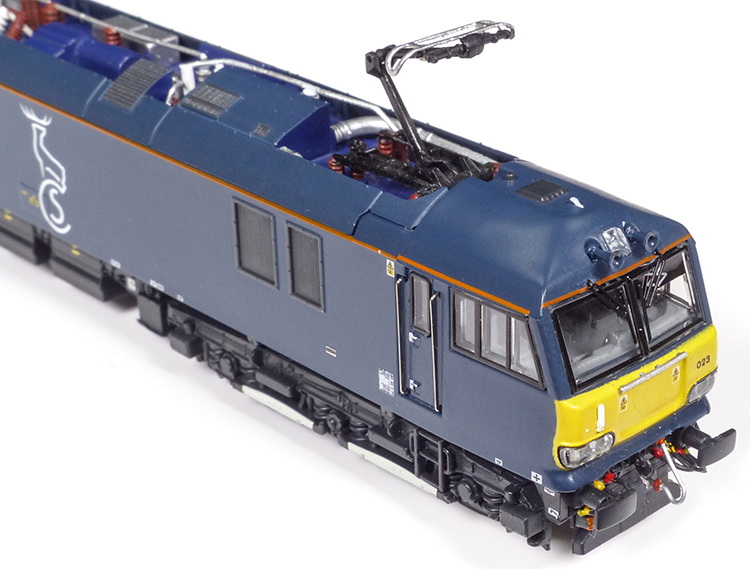 Revolution Trains outsourced the design and production of models to Rapido Trains. From the box, locomotives are well-presented, in keeping with previous models from this manufacturer. The bodyshell shape looks accurately captured. Even the difficult reverse curvature on the cab roof diagonals looks ‘right’ – not an easy feature to capture. For this alone, its designers are to be applauded.

Fit and finish of components is neat without visible traces of glue and, more importantly, no loose components were found in the box. An achievement in itself considering the finesse and impressive number of components snaking their way across the roof line. It’s here that the eyes are drawn first and where the majority of the detail lies on this locomotive class. On the model, the number of insulators, each with a shape and size specific to its location are a marvel to behold. Though moulded with the bodyshell, the grille vents, which contribute to the charismatic vacuum cleaner sound of the prototypes – gaining them the nickname of ‘Dysons’ among some enthusiasts – are well presented and aren’t hidden beneath the paint. Pantographs, though fragile, remain in-situ in their raised or lowered positions and, if handled with care, shouldn’t pose a problem. 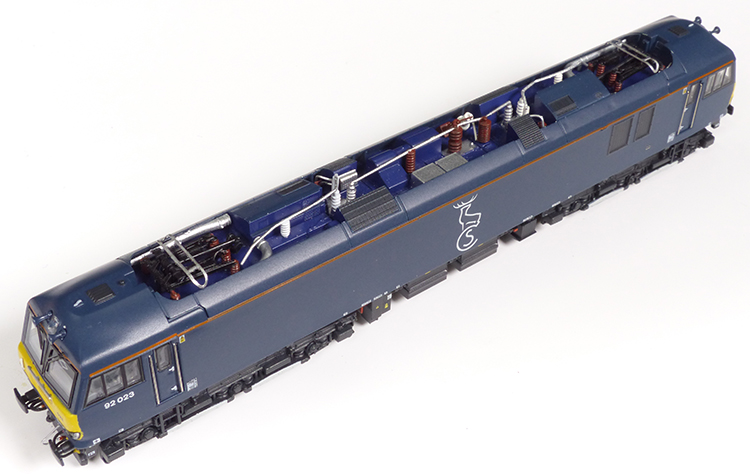 The smallest amount of plastic shrinkage is perceptible from a shallow viewing angle, looking the length of the bodysides where the body clips are located, but you really have to stare to see it from such an angle. The benefit of the body clips, however, is that interior access is gained by carefully prising the sides away and up from the chassis. No screws, no small parts lost.

Once inside, ingeniously, each cab interior is lit not from the cab itself, but via three SMDs located behind the bulkhead, inside the bodyshell, which act as uplighters, diffusing their light via a solid translucent block of plastic. This results in a more even spread of light. Under DC use, the cab lights and upper-most headlight are lit all the time, though a switch to the underside of the chassis controls the tail lights. Opening up the body shell and placing black electrical tape over these LEDs will cure a potential problem for those who aren’t running their trains at night.

The cab interior comprises of a one-piece grey plastic moulding with an impression of controls, plus the driver's and second man’s seats. It can be removed with little effort to install a driver and the typical suite of clutter above the control panel, from high-vis' jackets to water bottles, woolly hats, newspapers, hard-hats, or gloves. 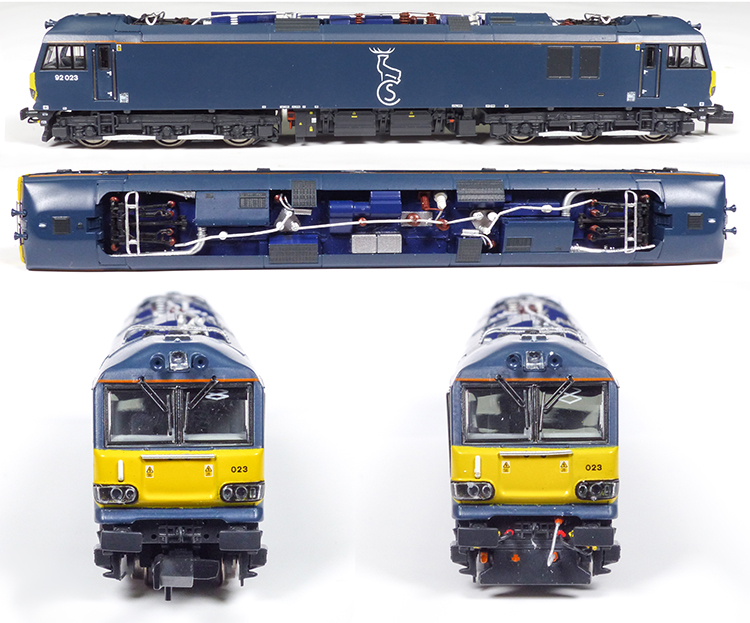 A ‘sugarcube’ speaker and Next18 decoder interface with blanking plug are pre-fitted to all models, saving hassle on DCC conversions later on. However, space is at a premium. Adding weight to this light model might be difficult. That said, its haulage capabilities are adequate for most N gauge modellers, traction being assisted by a traction tyre to the driver’s side of each inner-most axle. Ensure these are well seated to prevent erratic running.

In essence, this should be considered the definitive N gauge model of a modern yet, tragically, under-utilised locomotive class. With Wabtec/Brush having carried out recent refurbishments, it is hoped that numbers of the Class 92s won’t dwindle anytime soon, offering the manufacturer more liveries of an outstanding locomotive class, and British Rail’s final ‘hurrah’.