If you haven't driven a road-railer before, I can tell you, it's an experience. I drove one on a heritage railway in France at the age of 15; 30mph in reverse in an old WWII Dodge WC with metal wheels across jointed track with nothing but my spine for suspension made for a bumpy ride as we went to rescue the shunting locomotive that had failed on me on a level crossing - it was an eventful day! 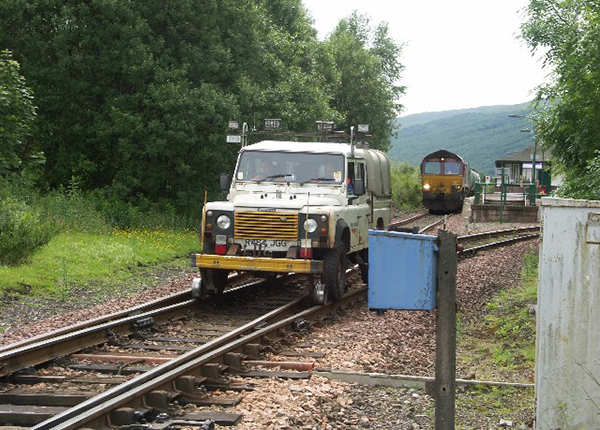 A Land Rover Defender road/rail vehicle in use on the West Highland line.

For the maintenance of the British Rail infrastructure, road/rail machines have been in common use since the 1970s, though earlier trials and versions existed in years prior. Today, they are increasingly common, mostly because of their lower cost, widespread availability, adaptability with attachments and versatility to run across the British network, particularly in hard-to-reach areas. Commonly-seen vehicles which are adapted include wheeled and tracked excavators, trucks and utility vehicles.

The latest model to arrive in the office from Oxford Diecast in 1:76 scale (OO gauge) is a long-wheelbase Land Rover Defender, to which small-wheeled rail attachments have been added front and rear. These act as rail guides. In reality, the weight of the vehicle remains on its tyres, these coming into contact with the rail head, thus propelling it forward or in reverse. Larger vehicles - such as excavators - might have hydraulic-powered wheels, or their steel wheels might be driven by the tyres, their tyres being elevated from the rails. 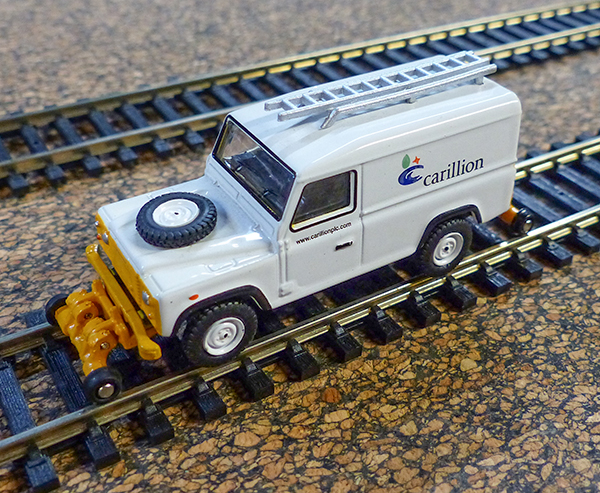 Oxford Diecast's model is great from the box. Its hinged wheels can be raised or lowered, subject to its location on a road or track on your model railway. Detail is simplistic, though an injection-moulded roof ladder adds a touch of detail. Wheels are of the correct stamped steel five-bolt pattern, too, not robbed from a parts bin like other manufacturers of die-cast models. Mounted on these and the spare wheel carried on the bonnet are five rubber tyres.

The model is supplied with four injection-moulded plastic ramps, often used to enable these vehicles to get on the rails when setting up. We've seen Oxford Diecast's model issued in Railtrack, British Rail and Network Rail guises before, but this time, it's being issued in the all-over white with yellow front and rear of Carillion plc. The now-defunct facilities management and construction services company entered into liquidation on January 15, 2018. This model sporting an '06 plate, makes it suitable for the 2006-2018 period.

Though a little shiny from the box, a spray with a satin or matt varnish to dull the colours (masking the windows and windscreen first) would be a good start to enhance it. Look out for models arriving in Aquarius Rail Technology colours, too. Recommended.

For pricing and availability, see your local stockist, or visit www.oxforddiecast.co.uk