It's semi-finals time and the producers have shaken up the format a bit. There will be monsters, and we don't mean the judges!

Fresh from winning Heat 5, the modellers faced a late-night planning session in the pub as filming for this episode started the day after the heat finished!

All the way from the first heat, will their “crisp and efficient” track-laying stand them in good stead?

It's all change for the semi-finals.

Badly pre-laid track on the baseboards with iffy wiring!

A poor “let's bogie” pun met with an unimpressed cheer!

The operational challenge is an interesting addition. Each team has to unload a wagon without touching it and transport the item across the layout. Could this provide inspiration for Hornby's next batch of operating accessories?

Corby promises us plenty of monsters with Nessie, King Kong, Godzilla and a T-Rex. Good to see the dinosaurs are back, it's not really the GMRC without them. They're running two operational loadings, one is Nessie and if that fails, the fall-back is loading a pipe. Lets' hope it goes well with the first one.

Rail Riders are building a child's bedroom possessed by an evil tree. Not creepy at all, although I'd love to have been at the meeting where that idea was shown to the production team... Les drops in a pun when chatting to Tim and Kathy, Tim gives him a look that suggests he's not impressed with teams muscling in on his territory.

All that late-night planning in the pub sees Grantham planning the weirdest model railway I've ever seen. The locomotives will be stagehands moving the scene around – Steve's not impressed, he's interested in model railways he tells us. That's handy, considering his day job but come on, we are promised jousting knights. You don't see that on 'Layout of the Month'.

All the teams are extending the track system – it was designed by Stern Steve based on Peco Settrack and provides two loops and some sidings - for more operational interest.

Rail Riders are building a scary sculpture and arguing over the concept of an enchanted tree. Les builds a plaster treechild, Simon hacks the top off and puts the branches on its head. Les claims it's constructive criticism and will make things better. Viewers are not convinced.

Moving the 'Design Room', which I'm sure was called the 'Art Room' last time, Simon is defiling Thomas and Percy models to make them scarier. Look away now kids!

Suddenly, the peacocks howl and we see a bloodied drill bit! Simon has, apparently, drilled through his finger while making holes in Annie or Clarabel and needs a trip to A&E. Les looks up from his treechild painting like a man not guilty of any crime, we can only suspect what has really gone on. 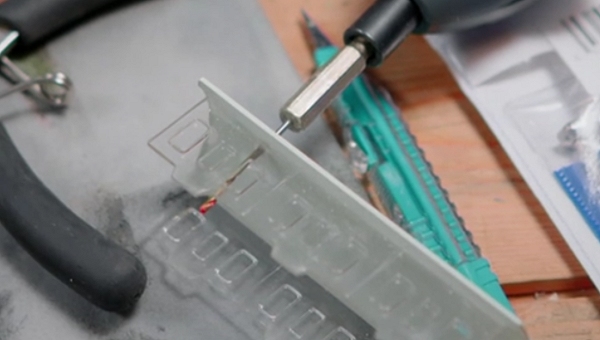 By the end of Day 1 – Grantham has trains running and the all-important turntable stage works, blowing Graham across the room. Corby are sacrificing speed for quality and their high-level track isn't running.

Judging time. Steve thinks that Team Grantham will have some of the purists coughing into their tea with the avantgarde design. He's not wrong there, you could power a volcano from Heat 1 with some of the reactions. If it works, it looks like a 4. Kathy agrees, it's radical and so another 4.

Rail Riders treechild scares Kathy. Well, that and they appear to be murdering their teammates (Joking. Simon comes back later in the show and knows to compliment Les's efforts) but awards a 4. Steve's well out his comfort zone and hands out a 4 too.

Kathy thinks Corby has just shaken a big bag of monsters over the board and awards a 3. Quite what is wrong with this approach, that has worked so well in the past, is not explained. Steve's not awarding points for contingency plans and offers a 3 with the possibility of improvement.

For Corby, 16-year-old Will has been dispatched under the baseboard to wire things up. After explaining the basics of DCC to Tim, while he tries to pile on the pressure, Will pretty much sums up the pleasure in our hobby; “You see a layout like this. You see trains running, lights flashing, points changing and you get the satisfaction of going 'I did that'“. And that, ladies and gentlemen, is why we do it.

Tim has stolen three items from Steve's house – some hair rollers, toe separators and some of his collection of VHS videos including, GMRC Steve Flint's best bits, The Best of Ballasting 1996, Baywatch/Springwatch. 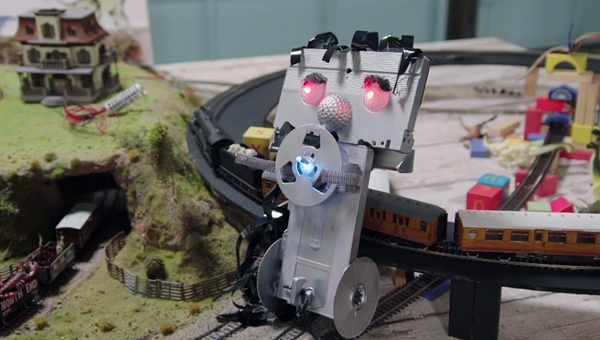 Corby uses the separators, sprayed grey for a pipe rack. The rollers are sprayed grey and become coils of barbed wire loaded on a wagon. The spools from the tape, sprayed grey, support a gate guardian aircraft for the theme park.

Grantham has a gatehouse made of a video cassette case, complete with stain glass window, topped with hair rollers, there is a heraldic device made from a spool on the front and pennants from tape. Toe separators become decorative gate features. They take the win in a tight competition.

Back at the baseboards, Grantham demo their operating challenge, which involves a Faller Road system vehicle, with a horse replacing the body, loaded on a wagon. It runs off, around the layout and over a drawbridge. Utterly brilliant, surely someone can do this on a conventional layout. Without the horse, obviously.

Build quality judging:  Steve likes Grantham's engineering, even though the scenery is still a bit sparse. 4 points. Kathy only offers 2, she doesn't like the ground-up green foam pretending to be grass, even though it's as traditional a material as you can get. Rubbish, but traditional.

Corby's animated Lady of the Lake is being described as the Lady of the Muddy Puddle, or “just awful” as Kathy describes it. 2 points. Steve is a bit more optimistic with a 3.

Rail Riders modelling is springing to life, but still only gets a 3 from Steve. Kathy gives the same as she'd like to see floorboards being broken up around the tree and the rest of the layout just looks put there.

The traditional third-day panic includes Grantham testing their jousting trains and Corby trying to get anything to work – stopping only to tell Tim to get lost, which does the job and everything is successfully tested. Rail Riders are so desperate to get power to their animations that they let Simon make another hole.

Nessie is hoisted in her tank on a gantry and placed on a flat wagon. She's a heavy beast and the train stalls on a bridge, but she makes it to the theme part and is unloaded successfully. They then go for broke with a pipe loaded on a wagon from a tipping platform and then unloaded further on with an ingenious tilted track. Finally, the Lady of the Lake appears through the swirling mist.

Jenny and Simon are dressed up for the demo in a smoking hat and velvet jacket respectively. To be honest, Simon looks so comfortable in his outfit, you suspect it's his normal clobber as he lounges in his railway salon to peruse the latest issue of a fine model railway periodical. Jenny is holding a horses head. I don't know why, but it's ominous. 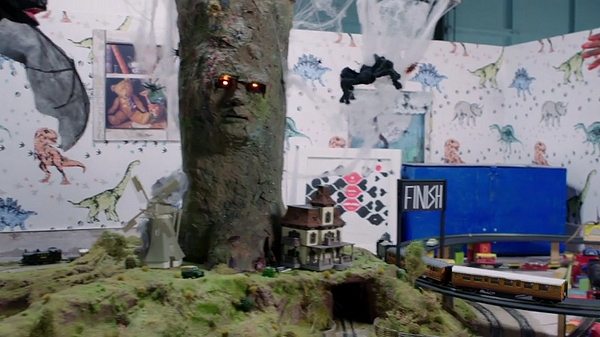 Anyway, the layout is a scary and very detailed room. The ghost train hauls a train full of creepy crawlies. The 'Flying Spooksman' passes Maifest Station. A child's toy chest opens with glowing eyes and screams as the train passes.

Simon takes over the decapitated horse to demo the operational challenge. A flat wagon backs up to a hearse on a ramp, which promptly runs onto the wagon bed. There's some point action to move the load to a siding where the car is unloaded by a skeletal hand, rolling up to a miniature funeral party.

We're back in the days when knights were bold and Tim and James's jokes were already very old. 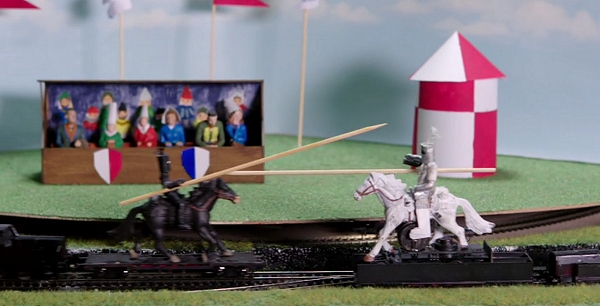 An armour-clad knight is prototypically winched in the air and then dropped on the horse that has backed up under him. The train sets off past the Lady of the Lake (blue water, not mud, Corby to note) with more mist swirling. She hands Excalibur to the knight and he sets off again.

Suddenly the black knight arrives, armed with a kebab stick. Arthur, who has also gained a stick, then vanquishes him in a joust and England is saved.

He is then unloaded from the wagon, runs off to the castle, pausing at the gate to wait for the drawbridge to lower. As it does, the stage in the middle rotates to show the castle interior. Arthur runs into this, stopping at the round table (OK, half-round) as the sun bursts through the stained glass window behind.

Team Grantham – The judges loved the animations, which worked as promised. They can go back to the pub to plan for the final.

Also through are the Rail Riders, who pip Corby to the place by just one point. 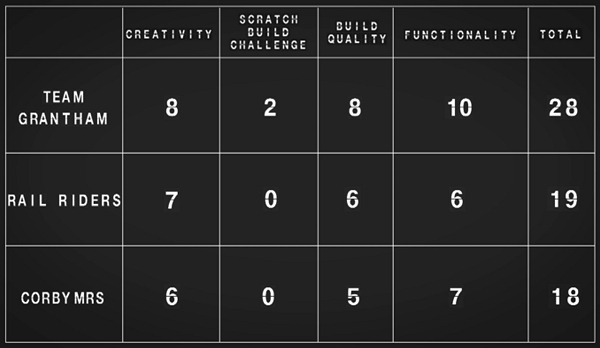 If you'd like to know more about Team Grantham, BRM met up with them and you can find the interview here.

Several of the team members are taking part in the discussion of this episode on RMweb.

Overall, this might have been the most imaginative and ingenious episode so far. Some of the animated features could easily inspire a bit of engineering on more traditional layouts. OK, you might not want knights jousting, but the winching mechanism that lifted Arthur on to his horse was brilliant and getting Nessie on and off a wagon would work just as well for a load of coiled steel.

I'm glad to be writing this in daylight though, that treechild could give anyone nightmares!