Heat four of the Great Model Railway Challenge is all about exploring uncharted territory, as Who's Counting Rivet Anyway, Three Millers and the Titfield Thunderbolts compete for a place in the semi-finals.

A mix of youth and experience, this team is keen to embrace technology. Recruited from around the UK, they haven't worked together before on a project, so will the mix help or hinder progress?  One of them is wearing a kilt.

Another team brought together for the competition, they bring a range of skills to the show and most traditionally, a modelling man of the cloth. Oh, and a trendy hat and shades adorn one head.

Some of these names will be familiar to those in the fine-scale model railway scene, so this team is a very serious contender. No funny clothes here, but Malcolm has brought along a precious 50-year-old bag of Peco Easy-stick ballast.

It's time to go where railway modelling has never gone before. Steve to the cashpoint, James to the Barbers and Tim, who has already lost his trousers in this show, to a fashionable clothes store. No jokes about Kathy, but it looks like anyone who dares would be in big trouble.

Kathy wants out-of-the-box thinking, Steve desires a trip beyond the bounds of railway modelling. That's not very far in some cases.

Titfield Thunderbolts show their youth by basing the model on the computer game Uncharted. We are promised a forced perspective and some very ambitious animations.

The Three Millers are going Dutch, or at least their layout is. Modelling the 1953 floods around the North Sea that destroyed the Netherlands rail system. Using real water (dangerous!), there will be a flood gate system to submerge the track.

Someone at the Rivets has been watching Journey to the Centre of the Earth because their layout is based around the British attempt to mine through the Earth's crust. We are promised wonderful animations and an underground explosion. And dinosaurs. Yay, dinosaurs are back! We've missed them, or at least I have. 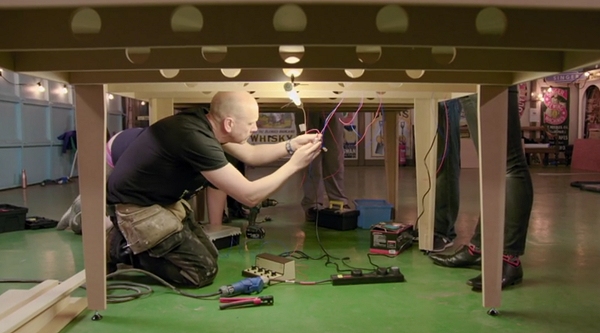 It's electrical hell for the Thunderbolts. Blue flashes, short circuits and dead wiring. Andy is having a very bad day. Things get worse when he discovers the wires are too short, something to do with wiring from the wrong side of the board, worse still, they have run out of cable! Captain Andy has to do some horse-trading with the other teams to land more cable. 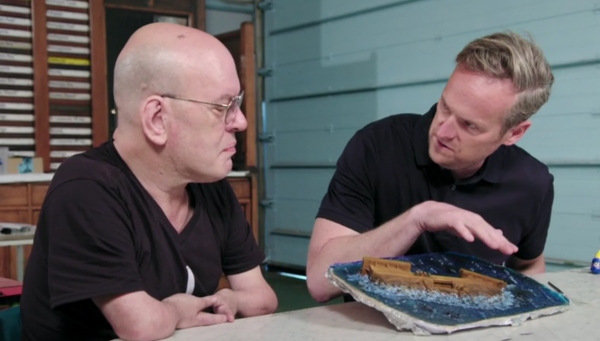 What an amazing galleon lying on its side in a realistic sea by Thunderbolts captain Andy. Tim is impressed. I'm impressed. If you weren't impressed, there is something wrong with you.

On the Three Millers layout, one of the pre-build appears to be a big plastic bathtub. The rest are a mystery.

It's the science bit back at the workshop, as the Riveters explain the concept of the “Stay Alive” capacitor, an ideal bit of kit when reliable running is so important. Has anyone else used them in the competition so far?

In the Art room, Three Millimetre Malcolm admits this isn't really his sort of thing as he never finishes models. I'm sure his team is wondering why they left him in charge of the buildings...

The judges are worried that Titfield has too much to do in the time available. Kathy awards a 4 and Steve a 3 for creativity, even though he sees plenty of adventure on offer.

Looking at the Three Millimetres, Steve likes the experimental model and give a 4, but Kathy thinks it looks a bit flat (it's Holland, surely that's realistic?) and awards a 3.

Finally, the Rivet counters have impressed both judges with their underground modelling. Kathy even thinks it has "pizazz", so both award a 4.

Only the Rivets have actually tested their track, surely a dangerous situation for the others. We know how important reliable running is.

Steve's on the prowl and doesn't fancy the Thunderbolts gradients, “It's like a ski jump,” he pronounces.

The Three Millimetres are testing their water, flooding the layout, and not really needing the emergency sponges. Everyone is impressed, even Thunderbolts Andy.

Cosplay fan Kathy has given up three plastic swords for the cause and Mr Tambourine Man, Tim hands over some instruments and a shuttlecock to the teams.

Dismantling the tambourines, the Rivets use the skin as wagon tarpaulins, and the buttons that held them in place are around the edges of the hole to the centre of the Earth. Staying with the hole, the swords become the sides and the shuttlecock becomes a geonet to catch rock falls.

Wim isn't taking the challenge seriously and turns the bits into wagon loads for his miniature artists to turn back into giant tambourines and shuttlecocks. It's all very abstract art, causing Tim and Kathy to look like someone has pooped in their coffee.

Thunderbolts Harun builds a septic tank with a diving board from the tambourine, the shuttlecock turns into a wigwam and the sword becomes bridge supports and shark fins. All this imagination takes the win.

As the second day draws to a close, Andy is happy with his wiring (at last), but the Rivets microcontrollers have exploded and the pit is going to be a gloomy hole, not a glowing hotspot. 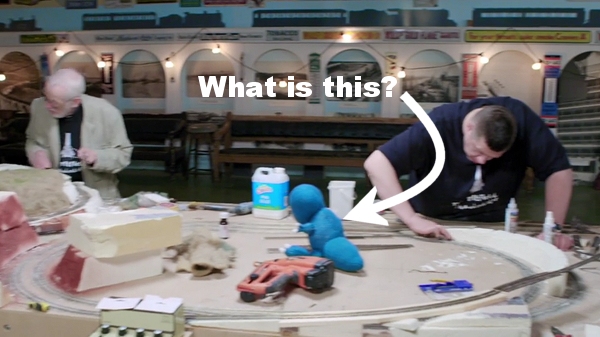 Scathing Steve thinks the Thunderbolts working practices are terrible and bangs on about the incline again. Kathy isn't impressed either, spotting big gaps in the track. 2 points from each judge. Ominously, Kathy announces that they aren't the tidiest modellers, but not the worst in the series either. Who wins that title we wonder...

In contrast, both judges are impressed with the track laying on the Rivets layout, but Steve's spotted the blown microcontroller. 3 points from each.

Kathy is worried about the Three Millers lashings of white glue, which needs to be dry for the final day, so awards a 3, but Steve is impressed by the floodgates and gives out a 4.

Gion awards himself 11 out of 10 for stress.

Is the “Dinky Dutch Dyke Diorama” pun the best of the series so far? It's surely up there with the best.

Progress has been made in the art room. Malcolm has broken the habit of a lifetime and completed his houses. Steve is impressed. The team has brought out a surprise animation with a neat little signalling system involving a man popping out of the roof waving red or green flags.

As time runs out, the pressure mounts. Under the Rivets baseboard, the team is searching for a missing head, the Three Millers glue isn't setting and the Thunderbolts drop a plane, although it's supposed to crash later on so maybe no-one will notice. 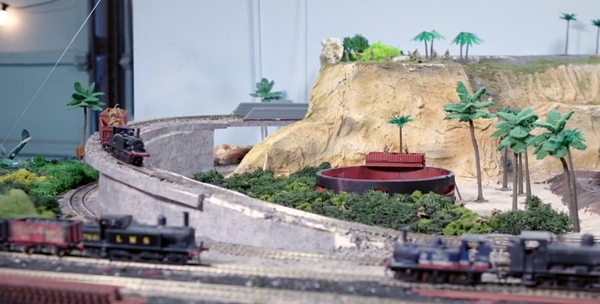 The Tiger Moth crashes into the forest bursting into smoke. The heroes escape on an N gauge train that vanishes into a mountain where it will be on a helix track and out of sight for a while.

Steve then has to eat his words as the trains CAN manage his “ski jump” gradient. You can almost feel the smugness of the team members.

After a gun battle, the heroes reappear on a OO train (it's got bigger!) after a derailment escape, the volcano bursts into more smoke and the boat sails away.

Three Millers – Luctor Et Emergo (I Struggle and I Rise Up) 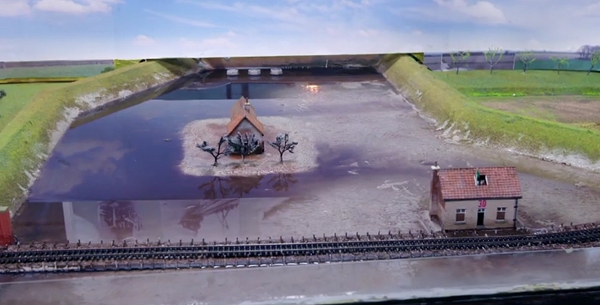 The tide comes in – with dirty water, not the clean stuff they have been testing with. It submerges the track and Steve has to dab away with a sponge. Then the water runs out and it all looks really effective. Lock gates open and the train runs through. The signal house man does his stuff. It all looks great, but only one train?

Who's Counting Rivets Anyway – Journey to the Centre of the Earth 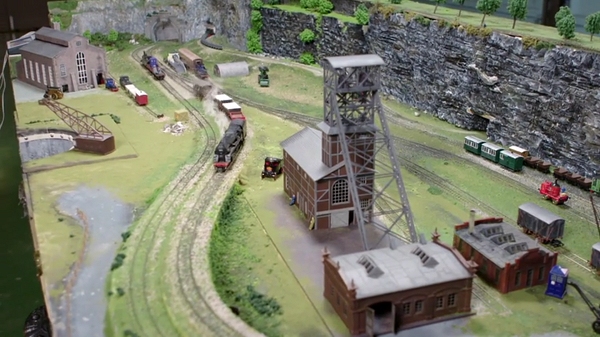 So many trains! A 009 model takes stone from the quarry and a 9F chuffs it's way through along the mainline – a thousand modellers are probably shouting that the smoke is coming out of the wrong chimney (Nerd note: On a Crosti 9F, the chimney is on the side of the boiler, the one on the front is just for lighting the fire)!

More impressive is the workshop interior with a working engine, which means no-one misses the figure animations that didn't work. There is a man with a missing head on the platform, so they didn't find it earlier.

The crane lifts the workers up the mineshaft, but suddenly there is a bang (OK, loud pop), more smoke and the lava core bursts into life. All this causes an earthquake with the whole baseboard shaking.

Who's Counting Rivets. Four trains working at once please Kathy, although Steve is more demanding, wanting trains in the underworld as well. Some people are never happy... 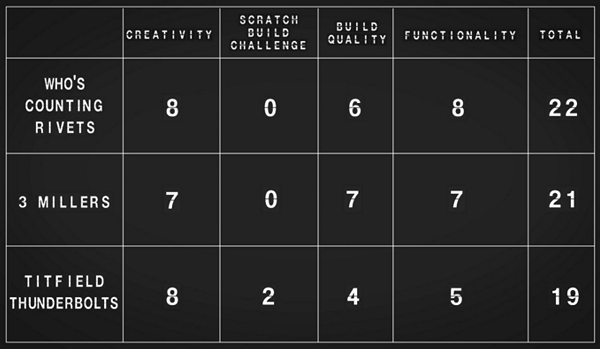