It's all-out British in heat three of the Great Model Railway Challenge as The Railmen of Kent, Cambrian Coasters and Loco Ladies battle it out.

We're settling into series two of the Great Model Railway Challenge and if you don't know the drill now, here's a quick reminder: three teams go against each other to create the most creative and entertaining model railway possible over just three days.

This episode, the teams are presented with the challenge of creating a model railway based around the theme 'Best of British'.

After presenters Tim and James have finished their larking about with luggage on the platform, Tim introduces the theme to the teams. Conjuring up images of cream teas, garden peas or the royal family the judges are looking for good animations around the theme, too. 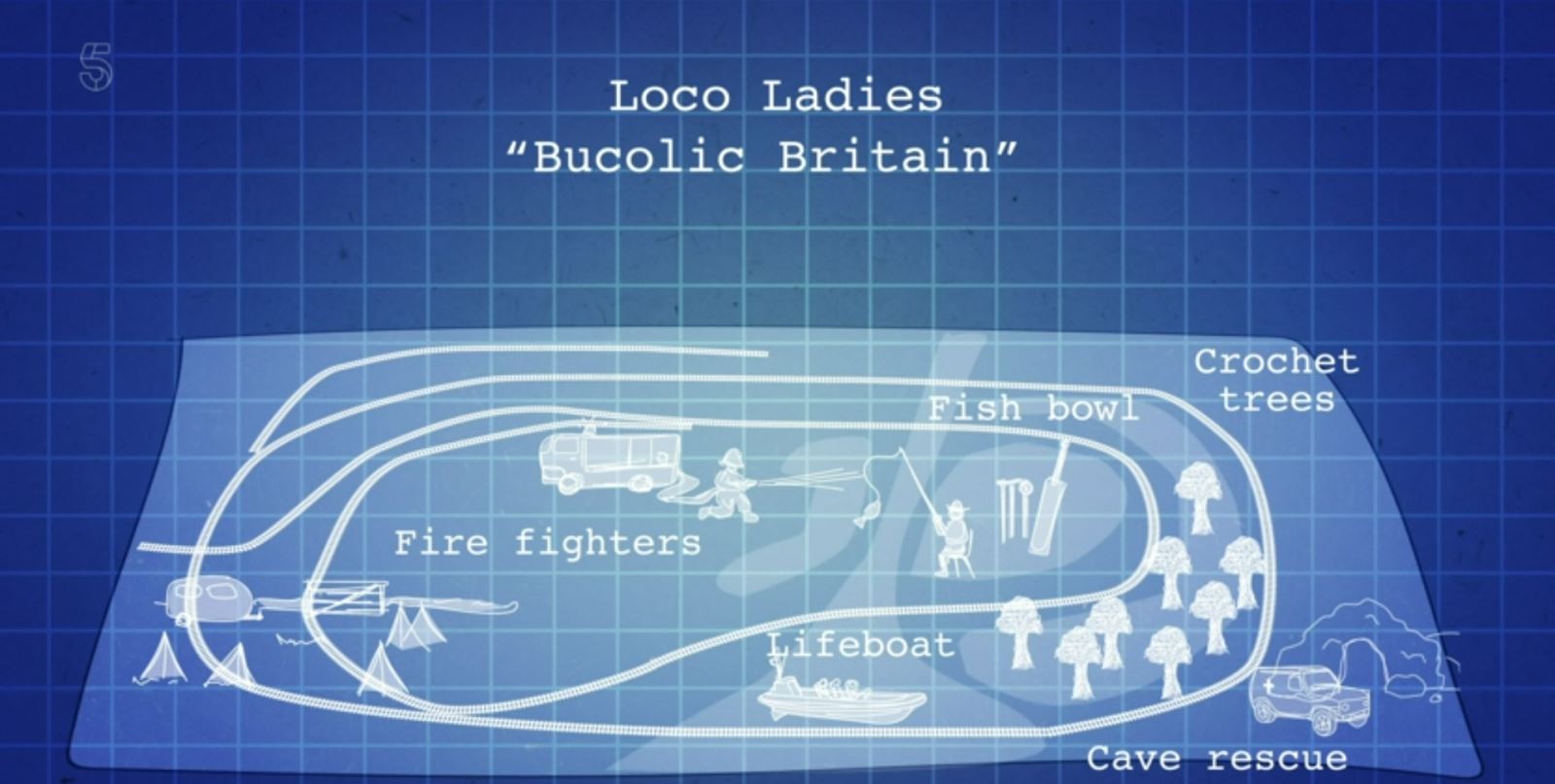 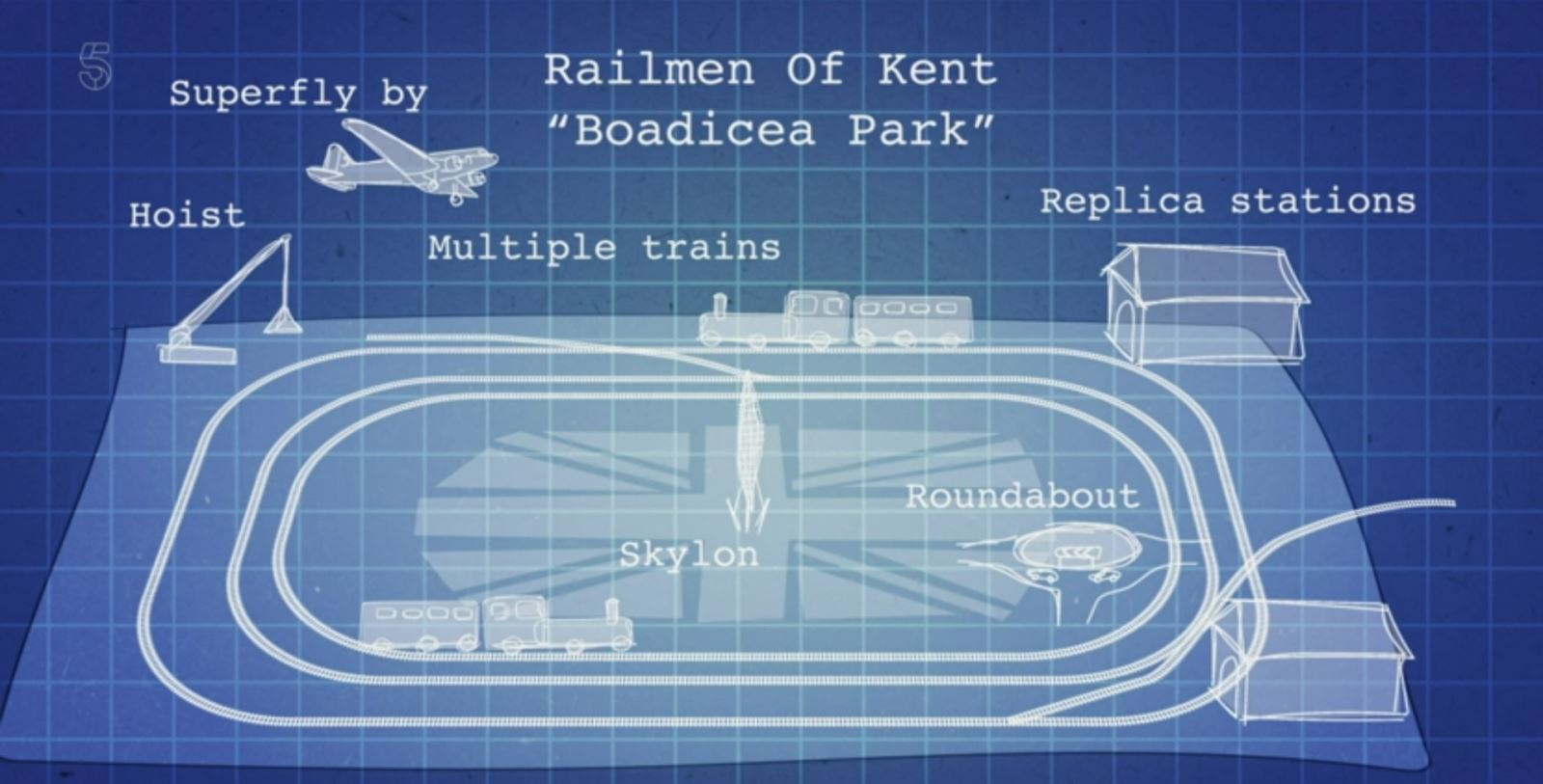 Stern Steve expresses his enthusiasm for the theme with gusto, waving his clenched fist around - the teams had better deliver! Meanwhile, Tim meets team leader of Loco Ladies, Carol who explains why they're so keen to beat the stereotype of railway modelling being a male-only hobby. Kathy Millatt agrees, claiming she has been offered free entry into many an exhibition because nobody believes she's interested in railway modelling. Carol introduces her theme of quaint Britishness, 'Bucolic Britain', though there are already concerns over the drying time required for the water.

Meanwhile, Railmen of Kent who have a keen interest in their garage (no, not music...) are a family joining forces to unleash their theme 'Boadicea Park' upon the unsuspecting eyes of Stern Steve. Will he manage to curb his excitement for the working wagon lift? He gives the plan a firm nod of approval, though warns on the effects of gravity in miniature.

Cambrian Coasters however are cooking up (terrible pun intended...) a theme around a food festival. But will it have the judges salivating? Saying their wives will be glad when it's over, Stern Steve questions if it's their modelling or marriages that are the subject.

Loco Ladies are in a sticky situation with their track laying... will they have to resort to glue? Carol begins painting her estuary a shade of Hockney blue - the judges had better don welding masks. Also, Tim gives Cambrian Coasters' team captain Patrick the low-down on the biggest Yorkshire pudding that never was for our viewing pleasure... Steve and Tim visit Great Uncle Nick from Railmen of Kent to see how he scratch-built the station - one of the pre-built items permitted on the show. Carol from Loco Ladies gets emotional as her father's model boat will form a part of the estuary scene. Highlight of the segment with Cambrian Coasters - Ian's mug with the words 'I'll do it now, in a minute'... I need one!

At the round up, Stern Steve claims his socks aren't being blown off... (does he want dynamite?) Railmen of Kent are on a target for three points by Kathy and Steve.

Meanwhile, a derailment prevents smooth running for Railmen of Kent, Cambrian Coasters race ahead with their track laying and Carol of Loco Ladies explains why her estuary is being drained between her baseboards. Gravity is harsh... though her Dunkirk spirit will see her overcome the leaky layout situation "we're not worried about it", she says.

Stern Steve says he's looking forward to exciting results - hang on, yesterday it was all about socks being blown?

The pressure is on with Cambrian Coasters, as Patrick gently persuades Ian to crack on. Ian "isn't worried about deadlines". Patrick looks worried. Kathy is keen to point out to Fred of Railmen of Kent that she likes the points on their plan. Could it prove to be an issue, or will the locomotives 'slip' through? (oooh, pun...less, less...)  Loco Ladies get to test their locomotive, though a day later than planned.

Meanwhile, Graeme makes a forced perspective viaduct in N gauge which excites Stern Steve as he claims he'll look forward to getting down to see it. During the catch-up, it's a three from Cathy for the Loco Ladies because of their leaky resin issues, though Stern Steve is softening, he likes their quick methods to landscaping, using yarn to create trees. Railmen of Kent are ahead.

This episode sees the teams presented with a whisk, foil and safety goggles from Tim's kitchen (what does he cook up..?) Sounds corrosive...

John from Rails of Kent makes the goggles into a bus stop, uses the whisk to make arches and the foil to make a modern sculpture.

Gill from Loco Ladies uses the whisk as the basis of a hot air balloon, the goggles to make surf boards and foil to make rocks.

Neil from Cambrian Coasters attempts to transmit all the right signals from his communications tower, though he forgot to use the foil (ooops!)

John wins the challenge and Kathy expresses her enthusiasm for his creations saying the bus shelter would is the sort where you'd get wet if it rained and blown if it was windy - highly realistic, then. She liked his sculpture too...

"It's tighter than a double stacked train in a standard gauge tunnel", says James... surely that would be a train wreck? The team's builds look far from it though as the last few hours become more noticeable. Stern Steve is looking official with his clipboard at the ready... concentrate Steve, it's no time to be doodling! Meanwhile, Tim's kitchen 'special brew' has been consumed by the Loco Ladies team as they go 'full on' with vibrant pink and green crochet trees. "They're accessible to anyone" says Carol (well, if you can crochet...) Tim and James eat industrial quantities of cake. The Cambrian Coasters have an annoying short circuit to solve at the eleventh hour, though full marks to 'Flint's Finest Pudding Works' adorning a building on their model. Hang on, could this be flattery in a bid to score 'brownie' points (another pun, anyone?) Tim cracks a few equally horrific puns, though the Cambrian Coasters pasty train is behaving nasty. 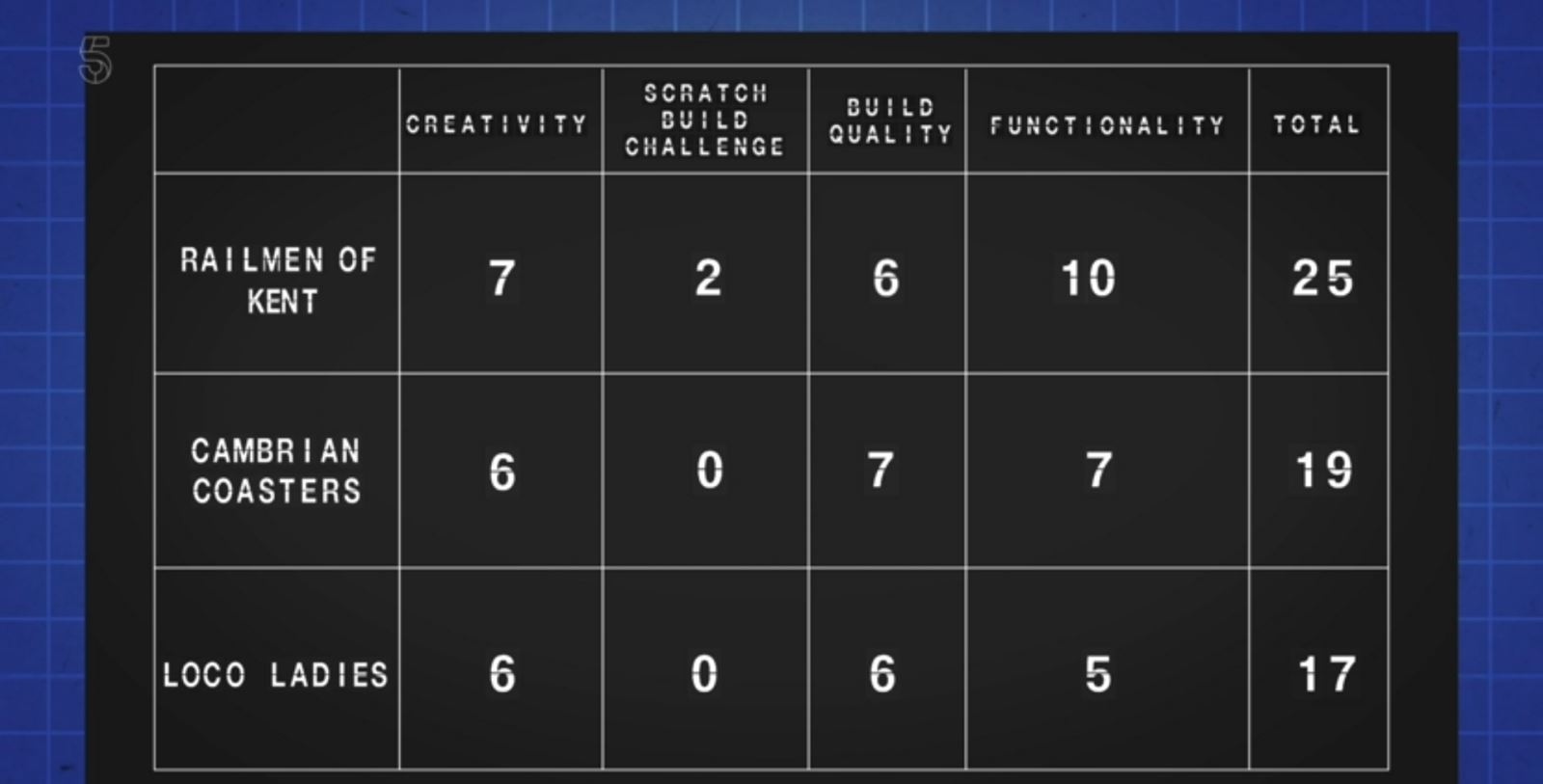 Cambrian Coasters' layout is entertaining, though the crane can't quite lift the pastry, the haggis loader works after approaching the unloading point at 'ramming' speed and they are hit with a few running issues. Loco Ladies' barn fire doesn't spread (...lucky miniature sheep) but the cave animation does, and a gentle hit ensures their lifeboat sets off to the rescue. All goes to plan for Rails of Kent as their locomotive lift works and Stern Steve and Kathy enjoy a right royal knees up as the queen arrives into the station, an animated fly-past working perfectly. Rails of Kent win the episode, securing them a place in the semi-finals.