Is the US Union Pacific’s ‘Big Boy’ 4-8-8-4 locomotive worthy of the railway enthusiasts’ ‘hall of fame’? Howard Smith investigates.

We don’t usually review a model based on a non-British prototype, though when offered the opportunity, on this occasion, we made an exception. The Union Pacific’s ‘Big Boy’ 4-8-8-4 locomotives were arguably the heaviest steam locomotives built – weighing more than a Boeing 747 – and a pinnacle in engineering for their time, capable of hauling 3,300T trains up inclines reaching 1.14-in-100.

The key attribute of this locomotive class was its tractive effort. The first port of call before scrutinising the detail, I tested its haulage ability on 90 two-axle wagons, which it handled from a standing start. To test its limit, I increased this to 105, still without wheel slip, though the weight of the train became unstable on the curves. The locomotive’s great power is largely because all of its 16 drivers are powered, combined with a locomotive-only weight of 542g.The locomotive is powered by a large motor, driving worm gears via cardan shafts to two gear towers, one for each of its ‘engines’, powering the third axle from the front. Strangely, the foremost of these third axles has a traction tyre – something that is being increasingly phased out on new models – overkill, perhaps? Curves of up to 18in radius don’t phase the model, such is the level of articulation. Side-play in the axles of its tender, coupled with a trailing truck and articulated bogie offer freedom to negotiate complex tight-radius points. At full power, the locomotive appeared to run close to, or at its top speed, with plenty of torque. 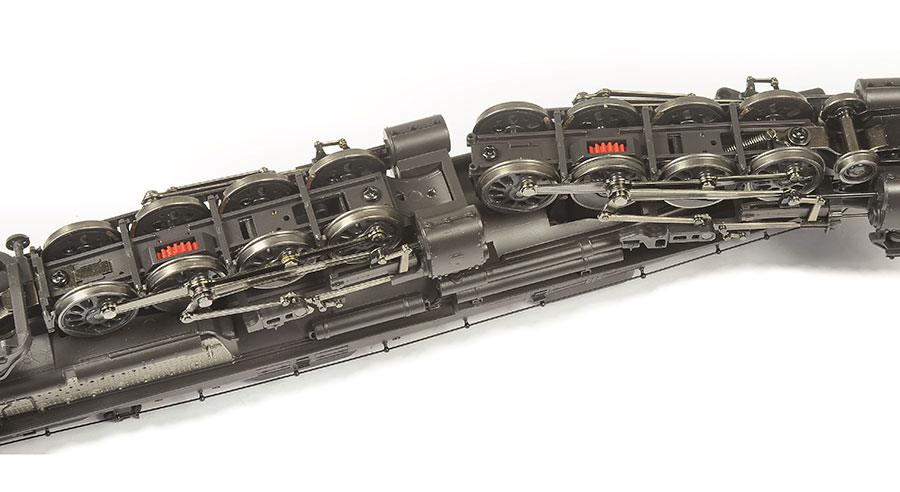 Rivarossi’s effort to miniaturise this giant of railed steam power remains very acceptable by today’s standards. Compromises – chief amongst which, its wheelbase stretched by a scale foot – provide sufficient clearance for model railways. Mould lines are a little apparent, most notably down the centre-line of the boiler, safety valves and along the high-pressure steam delivery pipes ahead of the front cylinders, though these aren’t so apparent from normal layout viewing distances.

The backhead of these notoriously complex-to-drive locomotives is a one-part moulding – a far cry from Hornby’s latest locomotives, but the enclosed nature of the cab keeps it hidden from view. Instead, more recent updates to this model have seen it fitted with cab glazing, anodised valve gear, finer brake gear and refined wheels with reduced flange size. The wheels benefit the locomotive the most – the raised running plate combined with the high axle count makes them prominent below the waistline. The dished front bogie wheels pose a common problem with manufacturers attempting to capture their shape.

Recent iterations of ‘Big Boy’ have seen a higher standard of paint finish with painted handrails applied, exemplified with this model. The application of the satin black over detail is to a very high standard, as is the painting of the safety valves.