Find out why this latest Bo-Bo diesel from Murphy Models has encouraged Howard Smith to research more on the railways of Ireland.

Delivered to CIE between December 1960 and January 1961, these locomotives were constructed by General Motors’ Electro-Motive Division (EMD) in Illinois, to its GL8 export model design. These locomotives were designed to be light and could be configured in Bo-Bo or A1A-A1A axle configuration upon ordering. Weighing 64T, they were powered by an EMD 8-567CR 960hp unit, though numbers B126, 127, 133 and 135 received the EMD 8-645E units of 1,100hp from redundant re-built Metrovick C Class locomotives after their withdrawl in the 1980s. The eight-cylinder two-stroke sound was quite unlike the common four-stroke designs being used in the UK at the time. Common traits of the US-design are its hollow-frame cast bogies with 3ft 3in wheels, narrow body with hinged door access and cab located at one end. 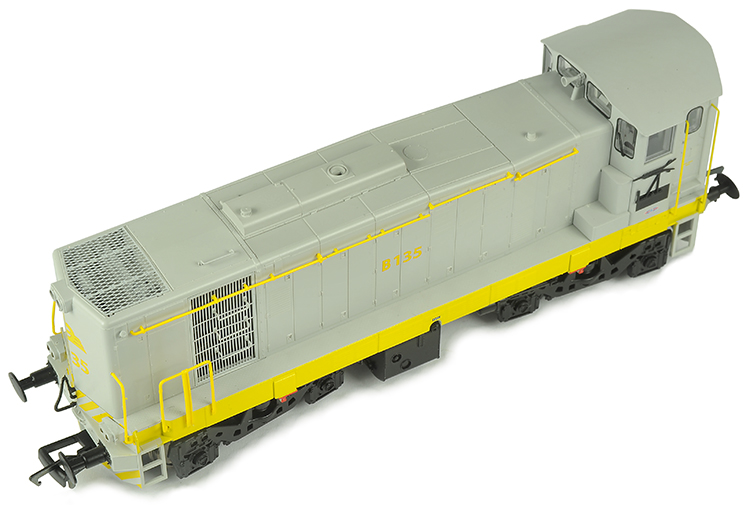 The locomotives were introduced for mixed-traffic duties, but after the 201 Class locomotives took over Mk. 3 push-pull duties, the locomotives mainly worked on freight services. The cabs were reportedly an issue for visibility when in service (similar to the EE Class 20s), hence could be seen double-headed, cabs facing outwards on both passenger and freight services. From 1989, when all but three locomotives (B121, B125 and B135) were equipped for push-pull operation with Mk. 3 coaches to work lines out of Dublin, radiating to the south and west of the Republic, the visibility issue was reduced. Withdrawals commenced in 1986, with the final pair being officially retired in 2008. Two locomotives are preserved.

Announced in 2016, Murphy Models’ 121 Class are at last arriving with stockists, much to the relief of Irish rail fans. First to arrive on scene are models in the ‘as-delivered’ grey and yellow livery, and its quick replacement ‘black and dipped golden brown’ livery, commonly referred to as ‘black and tan’. Post-1972 ‘supertrain’ orange and black, and orange and black with white lines, more commonly known as ‘tippex livery’ by the staff at Inchicore Works with IR and IE liveries, are soon to follow. 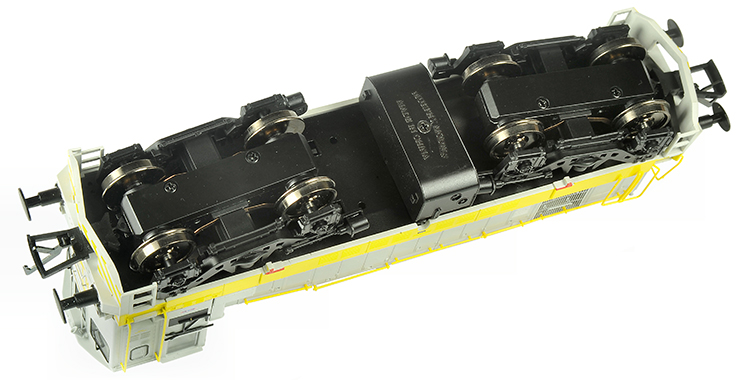 In addition, The Railway Preservation Society of Ireland (RPSI) has worked closely with Murphy Models to provide modellers and collectors with a special edition model of its locomotive B134, currently under restoration to main line specification at Inchicore Works. Limited to 300 pieces and presented in a box with RPSI logo, the models are selling well. The distribution of this version is being handled by Irish Railway Models, and is available to purchase from its website. Proceeds from this batch are being made to the RPSI, which has been affected by museum closures and a lack of railtours, owing to COVID-19.

Murphy Models’ miniaturisation of these locomotives is outstanding. Kindly sent for review by the manufacturer is a sample of B135 in grey and yellow livery. The livery application is flawless, without a spec of dust or stray fibre underneath the paint in sight. The yellow around the chassis waistline has sufficient punch and potential overspray around steps is well-concealed. Lifting points for the locomotive are expertly painted red. 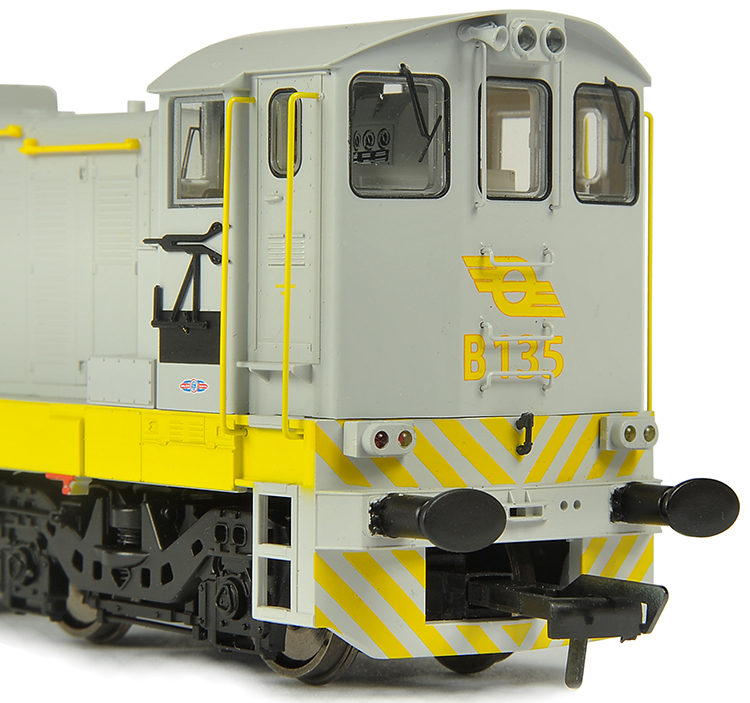 My attention is drawn to the etched grilles – one either side of the nose, a third on top – through which the manufacturer has depicted the air ducts. Both mesh styles closely match photographs. Moulded side access panels are superbly thin and their vents and locks are crisp, not concealed by the application of paint. Running the length of the hood are injection-moulded yellow handrails, painted yellow. Though vulnerable if handled, these aren’t as fragile as those fitted around the front steps, which are more prone to damage if not treated with care. Those fitted to the cab front, sides and to the left side of the nose are wire and far sturdier. Despite the class being small, detail variations could be observed as modifications were carried out and the manufacturer is catering for these. As such, era-specific longer handrails, different waistline side vents, windscreen wiper and light options are being offered.

The exterior detail fascination with this model continues round the side of the locomotive with etched tablet catchers. The running plate has a dotted impression of the treadplate. Some details can only be appreciated with the locomotive running. Though bogie side frames are cosmetic, the axleboxes rotate with sufficient lateral side play when the locomotive is in motion. Provision to upgrade to 21mm axles for scale 5ft 3in gauge track has been considered with enough room between sideframes. Brake cylinders and pipe detail are separately-fitted, while primary and secondary spring detail is visible behind the sideframe cutouts and is expertly crisp.

Though air pipes front and rear are supplied separately for the modeller to fit into bufferbeam apertures, the vacuum brake pipes are factory-fitted. On our sample, the vacuum pipe and horn to the cab end had broken. Both are a snug fit against the foam packaging. These can be easily repaired, though perhaps might have benefited from being supplied in the accessory pack for modellers to fit. 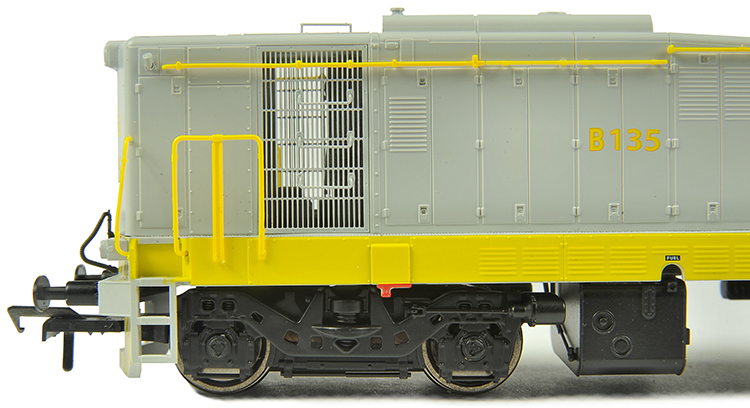 On test, the model is an excellent runner, thanks to its five-pole motor with twin flywheels and lived up to its expectation when rounding second radius curves. I appreciate the buffers being sprung, too. Though not a requirement if using the NEM tension-lock couplings as-fitted, the discerning modeller can fit the bufferbeam blanking plates supplied and use a more discreet coupling method of choice for a better appearance and more realistic operation. Surprisingly for its size, the locomotive is a heavy-weight, thanks to its die-cast chassis, tipping the scales at 338g. As such, it has no problem hauling loads of seven coaches, making it an ideal pairing with the manufacturer’s Cravens or Mk. 2 coaches.

Directional lighting is fitted as standard, though cleverly, a removable exhaust panel gains access to six configurable switches, allowing DC users to customise the cab interior, head- and directional marker lights. A 21-pin decoder socket is provided, with space to fit a speaker for DCC sound, also being offered by Murphy Models. Sound is being offered to cover both eight-cylinder powerplant variants.

The Irish rail scene is becoming more accessible thanks to the efforts of manufacturers like Murphy Models and Irish Railway Models. This latest model is significant in that it represents the first order of locomotives by CIE from the US rather than the unreliable British-built types emerging at the time. It surpasses the latest RTR specifications that we’ve come to expect, too, and with more liveries en-route, I suspect many will find more than one of these excellent models on their layouts.