This model railway controller from ANE Model capable of switching between DC and DCC modes and distributed in the UK through DMG Electech has Howard Smith interested.

DC or DCC? Choose wisely! It’s strange to think that many newcomers are faced with making this decision as they start out, knowing little about the pros and cons of each method of control. How do you decide the route you’ll take so early on without making a costly mistake? Perhaps the solution is in purchasing a control system that can handle operation of DC and DCC locomotives?

Distributed in the UK via electronics specialist, DMG Electech, and supplied with a three year warranty for peace of mind, the LD101 Dual-mode DCC/DC Command Station from ANE Model now benefits from knowledgeable UK-based customer service and aftersales support.

Connectivity is straight-forward as expected, an RJ-45 cable linking the compact control box to the command station, power being provided with the wall transformer included, while two rail outputs with screw terminals are fitted to the command station. The power input to the unit from the transformer dictates its output, this being 15VDC at 4A, more than enough for the average N or OO gauge DCC layout which isn’t laden with accessories.

When testing a new device such as this I never read the instructions first, partly because it’s a good test of the user interface to see if it’s intuitive, but also because I rarely read instructions anyway! Upon opening the box, plugging the respective cables into their sockets is fool-proof – there’s only one way – and the unit fires into life pressing the obvious button labelled ‘power’. Switching between DC and DCC modes was simple with the press of a button, and the selected mode is confirmed by LEDs on the command station. 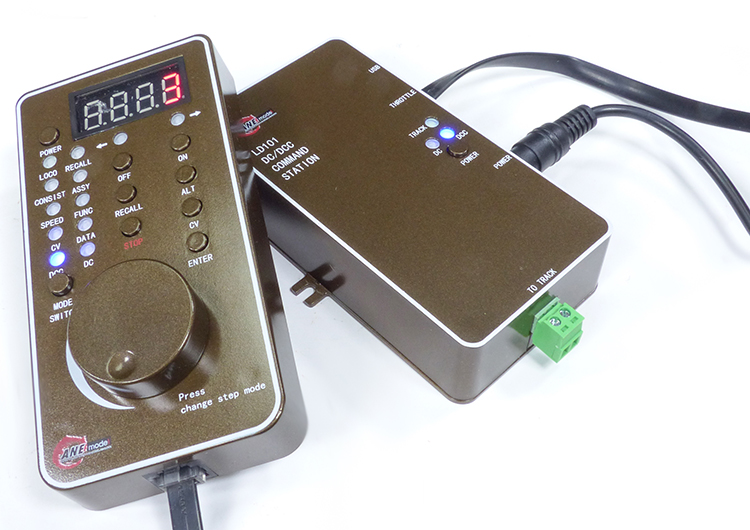 Throttle control is provided by a rotating knob, an indent allowing thumb control without looking at the unit, particularly useful if shunting on the layout, for instance. The throttle knob isn’t limited in its travel, hence will continuously rotate, speed steps on DC or DCC being controlled electronically. It requires some adjustment if changing from regular throttles. Accessory control, and directional control for both DC and DCC is via two buttons labelled ‘off’ and ‘on’.

Decoder functions F0 to F28are accessible from the unit, and which one of these is selected is displayed in the four-digit, seven segment display. Unlike some DCC controllers where functions can be allocated to specific buttons, or are ready to be pressed, this unit requires a little patience, but the trade-off is an uncluttered handset. I’d recommend adding a small washer to the rear of the control knob to lift it away from the unit as it rotates. Modifying a rubber mobile phone cover to fit around the rear edge of the box might make it more comfortable for longer operating sessions, too.

This isn’t a basic DCC control system – CV programming can be achieved through the unit, the control knob being at the heart of reaching each CV and setting its new value. Through comprehensive printed colour instructions, advice is given on getting started, function control, how to set up a consist, programming consists, accessory decoder control, recall functions and more, all with useful flow charts, removing a lot of the technical ‘jargon’ for the beginner.

With the simple push of a button, layout operators now have access to a control system that offers DC or DCC outputs – without fuss. Bar my personal modifications suggested, I have but praise for this new system delivering above expectations for the price.