The British Oxygen Company’s 100 tonne TEA tanks certainly made an impressive trainload sight back in the 1970s and 1980s, with their distinctive white livery with BOC branding, so we are excited to have the opportunity to review Olivia’s Trains exclusively commissioned models.

Olivia’s has catered for a range of liveries within the range of wagons, which Heljan has produced for them. From the early 1970s era, before TOPS panels were added, through to later unbranded usage late in the 1990s. There are also detail variations within the wagons too, which, in addition to the supplied accessory pack and additional options that can be purchased, accommodate alternative vent covers, buffers, drawbar gear and pipes and alternative bogies. The reviewed wagons utilise Mark IV Gloucester bogies, but the alternative GPS bogies used on later vehicles will be available at an additional cost. The accessory pack also includes an instanter coupling, useful for the appearance of the tail end of a train and Olivia’s can also offer the option of fitting a constant red oil lamp or flashing Bardic lamp.

Comparing the model to variants pictured on Paul Bartlett’s excellent online resource show how good the model is in terms of the overall look and accuracy in detail; a far cry from previous re-liveried TEA models. The Charles Roberts (Wakefield) built wagons had central spine frames with extended frames around the bogie area, nicely reproduced by Heljan in a charcoal grey. The MkIV Gloucester bogies are well captured and sit, correctly, slightly proud of the framework above the bogie. The wheels on one side of the bogie have brake discs on external and internal faces, the bogie at the other end then features the brake discs on the opposite side. Alternative oval buffers are also included in the accessory pack as are air and reservoir pipes. 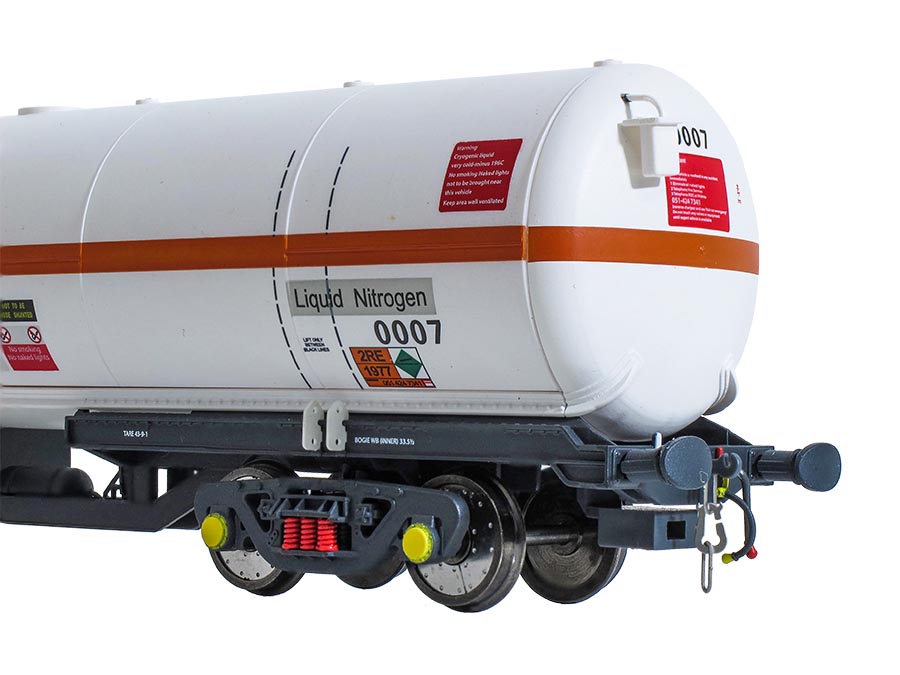 The decoration is to a high standard, with good clarity and definition to all markings. The models feature variations in the tone of the central band, which can be seen from photographs across the years to vary between a deeper red than the BOC logo through to fading orangey-mustard tones. As the years progressed the wagons not only acquired TOPS panels but also more warning and information panels. The clarity of small text in these areas is excellent. Into the 1990s the style of company logo changed to the sans serif styled BOC GASES, but a mixture of liveries were seen for many years.

Overall, we are very impressed with the product, especially when considering their suitability to create trainloads behind pairs of Class 76 locomotives available from Olivia’s. If you want to complete the look Olivia’s also produce a variety of VBA wagons to compliment your TEAs.