Andy York looks at the first model to emerge from this manufacturing newcomer, depicting the experimental gas turbine, and feels impressed.

Few had heard of KR Models before the Warley show in 2018 but there was certainly plenty of talk from that point onwards, with a new name to the market announcing plans to produce a model of GT3. Because of production using a pre-payment – not a crowdfunding model – there was a degree of scepticism in some quarters with regards to an unknown quantity promoting an ambitious project. It’s been confrontational at times online, but I have to say that I am actually really very impressed with many aspects of this model. All of the first production run of the model is sold to the initial purchasers, but it is anticipated that a repeat run will be started soon. I'm sure many will take this up. 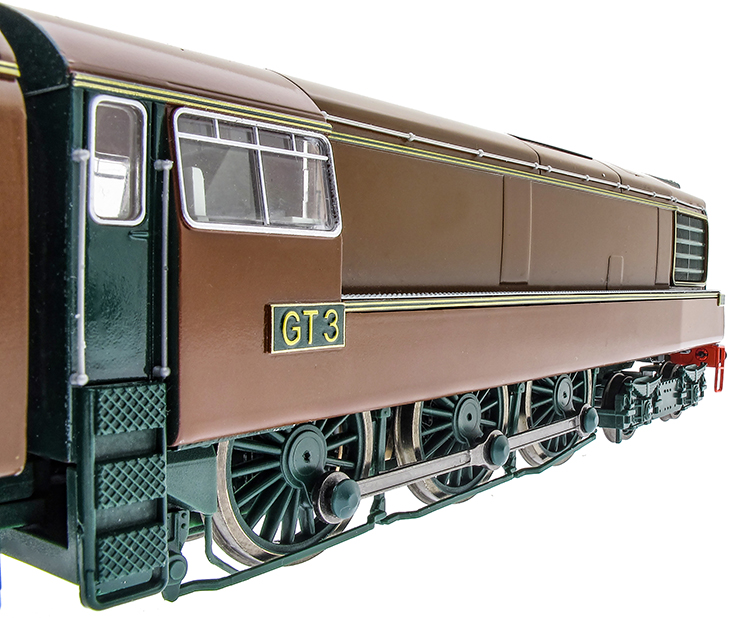 As a prototype testbed, GT3 was obviously a one-off locomotive with a very short active life on the railway. It was first shown at the Institute of Locomotive Engineers exhibition in February 1961 at Marylebone. Spells of testing on the North Wales Coast, the former Great Central main line and from Crewe to Carlisle followed, before running trials ended with a whimper during 1962, with the locomotive returning to its build site, the Vulcan Foundry at Newton-le-Willows to sit for some years until scrapping in 1966. So why, as modellers, would we be interested in such a singularly failed experiment? It’s certainly different and distinguishable from other projects; an ungainly crossbreed of a steam-era chassis and jet-age propulsion and noise with a unique livery and appearance.

Simplistically, the tender housed water kerosene tanks with a central corridor to the crew toilet at the rear, and a steam boiler for train heating. The gas turbine unit was in the centre of the locomotive with associated equipment, with air intakes at the front and exhausts on the top in line with the leading driven axle. The crew had comparatively sumptuous working positions in the steam-like central driving position. GT3 certainly wasn’t designed for tender-first operation when the lack of rear visibility is considered.

Canadian-based KR Models has certainly captured the look of the real GT3 and the principal dimensions have been achieved; the complexities of shapes, angles and curvature, particularly on the profile of the tender, which has the side shaping of a Mk. 1 coach profile, are well-captured. After opening the sturdy white box with its simple outline of the locomotive, and reading the accompanying explanatory leaflet, cautionary notice regarding the locomotive to tender connection and the exploded diagram and DCC functions, we get to the model in its ice-cube insert. The initial impression is one of heft at over 500g and quality to the finish with a pleasing satin paint for the Beech Leaf brown body and dark green details and underframes. I can’t make up my mind whether the yellow and black lining is printed or a transfer but it’s exceptionally neat and well-defined. The distinctive cabside numberplate is moulded and neatly painted as are the steel-coloured window frames.

There is a specific omission on our review sample of the pipework below the body over the leading bogie and possibly a more general omission of the strapping over the centre of the tender leaf springs and an oval inspection/access hole at the rear end of the tender frames. I also have question marks over the provision and style of the window apertures at the back of the cab and the front of the tender. There are no windows to the sides of the back of the cab. Photographs of the assembly of the locomotive in the factory show apertures, but were these plated-over later? Factory photographs show the side windows on the front of the tender were rectangles, with a large radius curve to the top corners, but on the model one of these windows is an extended straight-edged oval as on the rear of the tender. 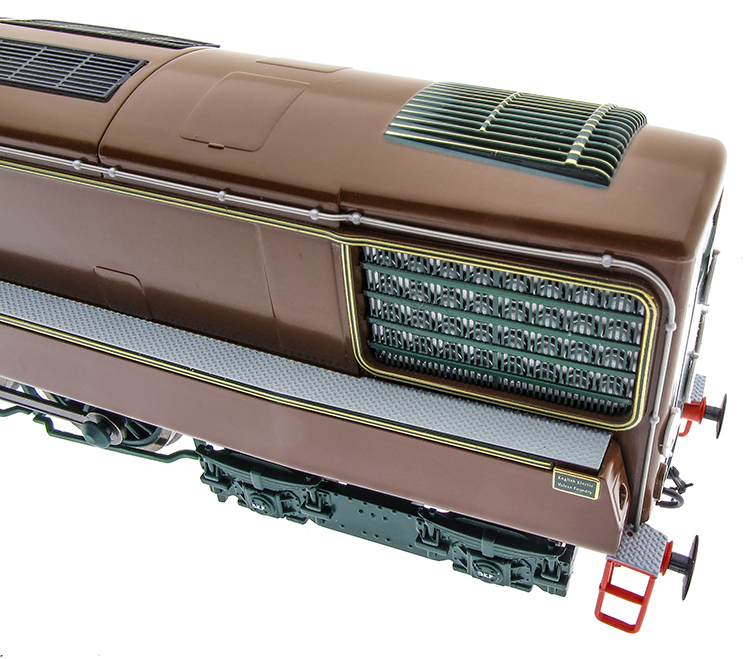 Having covered those aspects, everything else is very good indeed with some excellent details such as the air intake filter and grilles at the front of the locomotive, brake rigging and the accuracy of the wheel style. Straight from the box, the nuts securing the motion to the wheelsets are a traditional hexagonal style while the real GT3 had distinctive smooth round ‘hubcaps’. The detailing pack includes the caps shown fitted in our photographs and it’s wise to secure these with a small dab of adhesive, which can be unstuck later if ever there was a need. The pack also includes cosmetic screw-link couplings and bufferbeam detailing, plus alternative headcode discs. Care should be taken in fitting the pipes and couplings to the bufferbeam as the front bogie coupling pocket – which isn't removable without surgery – can still foul the fittings.

The model picks up power from the centre and rear driving wheels in addition to the tender wheelsets. The decoder socket is housed inside the tender body and the tender is electrically-connected to the locomotive via an eight-pin connection. Care should be taken when unboxing the model and I found it best to align and push the fittings together while the locomotive was turned upside down on a firm surface. Take it easy and they will come together leaving just a scale foot between locomotive and tender. This arrangement has kinematic movement, which can be seen underneath the model to allow it to run around second radius track and short pointwork while maintaining a close gap – not quite the 6in gap of the real thing, but acceptably close. This gives the 2mm discrepancy over the total length of the model. The current drives a five-pole motor connected to the centre axle, the coupling rods transferring motion to the remaining wheelsets. On test, the take-up is very smooth and it can crawl at speed step 1 on DCC. 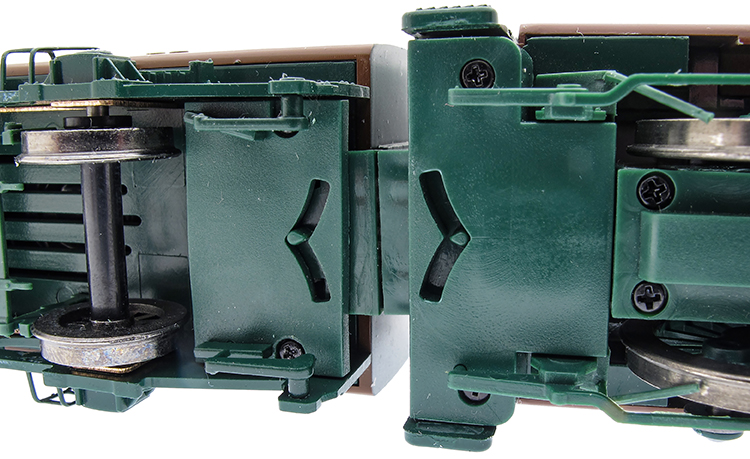 Our review model is the DCC sound option with limited sounds available under DC operation. On DC, the user gets the distinct turbine howl, which is also speed-dependent and, after winding up, accelerates away smoothly with inertia, so it takes some practice to use the regulator. Under DCC control, the full range of functions become available with the choice of whistles or horns dependent on the dates being replicated, the usual ancillary sounds and even the sound of the crew toilet. On DC, basic directional lighting is in use with the marker and headcode disc lamps lighting up on the front and the two tail lamps on the rear of the tender. With DCC, the user can also operate the cab lighting and choose to disable the directional lighting.

I would think those who took a punt and ordered will be delighted with the outcome and that there will be strong interest in a re-run, plus increased confidence in the other forthcoming projects from KR Models such as its 'Fell' and Bulleid 'Leader'.