These new coaches from Hornby have left a lasting impression with Tony Wright, who declares them to be exquisite.

As a rolling stock builder myself, whenever I examine what’s now available from the RTR manufacturers, I’m reminded how hard I have to try to get even near to their current standards, let alone equal them. This latest Hornby offering of the Southern Railway bogie van is a case in point – it’s exquisite in all its manifestations!

Some 120 of these luggage vans were built between 1927 and 1931, using redundant LSWR underframes, which were altered to suit. There were two lengths – 51ft 3in and 53ft 3in, running on LSWR 8ft bogies. Hornby has modelled the longer variant. To begin with, most were used on the South Western section, especially to Southampton Docks coincidental with the arrival/departure of the great liners. Latterly, their use was more widespread on the Southern, and in BR days, they could be seen far away from the Southern Region. During the War, several were converted to be used in ambulance trains. They ran originally on Mansell wheels, but these were replaced by plain steel discs between 1945 and 1948. After Nationalisation, the Southern green was replaced by BR crimson. Towards the end of their lives, a few received SR green. In the main, being rated passenger stock, they were kept quite clean – a crimson example, especially so, for use in the ‘Golden Arrow’; later replaced with a green example. Despite being passenger-rated, the types had no guard’s accommodation, unlike the non-gangwayed SR vans. Withdrawal was rapid between 1958 and the early-60s, by which time many of them were shabby. One survivor post-1960 was S2464S, which, in 1962 was repainted in Pullman umber/cream livery in its preparation as a hearse van for Winston Churchill’s body – a duty it fulfilled on the January 30, 1965. It still exists, having been sold to the ‘City of Industry’ in Los Angeles, in 1965. Other survivors went into departmental use, of which two have been preserved. 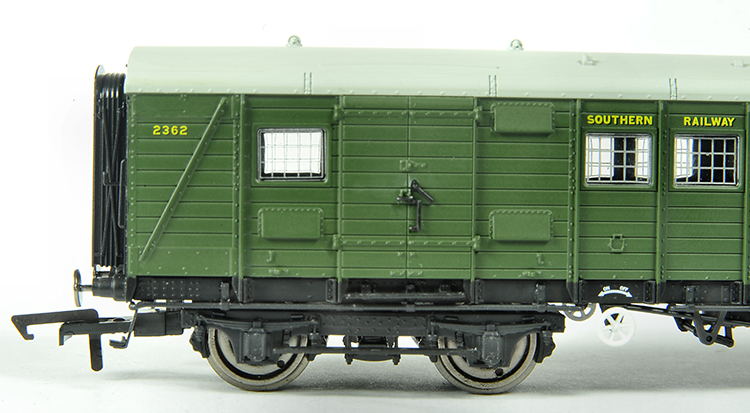 I received three examples to review, one in Southern Railway green, one in BR crimson, and the Winston Churchill hearse car. On checking the drawings at my disposal, these vehicles are spot-on. They correspond exactly in every dimension, and are amongst the most accurate RTR items of rolling stock it’s ever been my privilege to examine. Attention to detail is incredible, with a load of separately-fitted items. Beware, however, with regard to the fine detail. These vehicles must be handled with care, and, even in the packaging, one had a broken bogie footboard and another, a hand-wheel. These weren't lost in the truest sense, just loose in the packaging, and easily re-fixed with a dab of superglue. 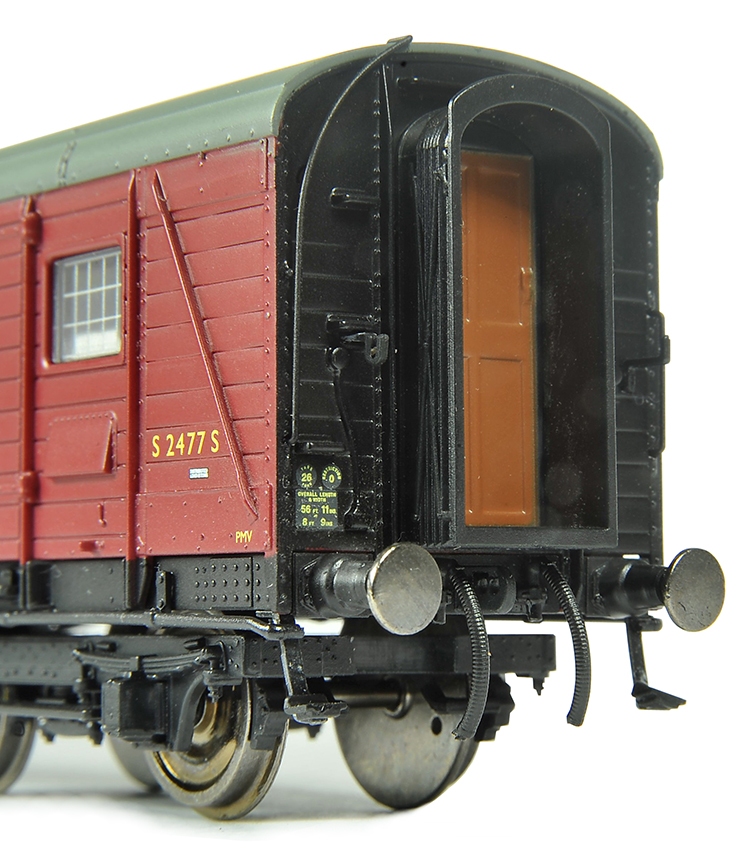 The livery application is exemplary, and all the lettering/numbering is perfectly-applied. At first, I thought the umber/cream van had not been lettered and searched through its box to find a sheet of transfers! However, it is branded, as it should be, discreetly on the solebar – which I only discovered after taking its picture – and at the ends. Returning to attention to detail, the hearse van has the correct, flat-topped/bottomed oval buffers and the other two have the equally-correct round buffers. All buffers are sprung.

The wheels are true-round and have consistent back-to-backs enabling these vans to run smoothly through a selection of hand-built and RTL trackwork. Strictly speaking, the Southern Railway example should probably have Mansell wheels, but these can be easily replaced. There’s certainly no need to replace the wheels on the others and was something I did automatically on RTR rolling stock, not so long ago. The standard couplings can be removed if necessary, enabling the train-heating/vacuum brake pipes to be attached to the headstocks. These are separate fittings, as are the four little destination blackboards that go underneath the ‘outer’ windows of the four ‘inner’ ones. These boards are not needed for the hearse van, even though they’re supplied. The van wasn't used in general traffic, so had no need of them. The model of it will complement Hornby’s recently-released SR 'Pacific' Winston Churchill. 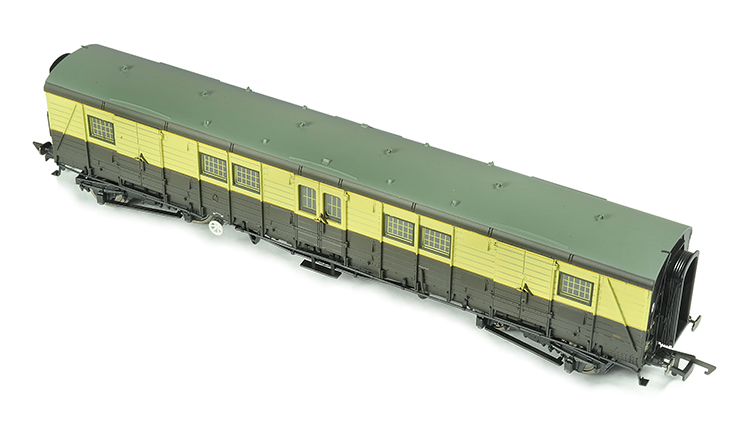 This is not the first SR bogie luggage van made by Hornby and its forebears. In 1958, Tri-ang released a model purporting to be of the type, with opening doors. Oddly and perhaps because of moulding difficulties, the gaps between the planking were the opposite of what they should be – protruding, rather than recessed!

Decades ago, I modified one using the Roxey kit for it. It can't be compared with these latest Hornby models. In a word, they’re wonderful!