One of the biggest surprises from the Hornby 2021 range announcement was a range of four and six-wheel pre-grouping coaches. Phil Parker takes a closer look.

More modellers are being tempted away from recreating the railways that they remember – often tired, run-down and steam-free, towards the bright and attractive pre-grouping world. Rapido's Stirling Single, Bachmann's 1P and Hornby's 'Terrier' offer options for suitable motive power, but the problem has always been assembling a realistic passenger train.

In the past, pre-grouping coaches were left to those capable of assembling venerable plastic, or etched-brass kits, and then tackling the complex liveries they need to wear. To make a credible job, you need to be skilled and even then, the building process would be laborious. To make things more complicated, many early railway companies produced their own coaching stock, or bought it in, but rarely to the same design as their contemporaries. Looking at the tiny potential market, it's little wonder that RTR manufacturers ignored it. Until now.

In its 2021 announcements, Hornby stunned everyone by revealing a range of four and six-wheel coaches, produced in a variety of attractive liveries. Not only that, but the models were planned to be in stock before Easter, and we received a review sample in December.

What we have isn't a perfect replica of any specific coach. Instead, each vehicle is generic, but with options to tailor them to come closer to the prototype whose livery the model wears. 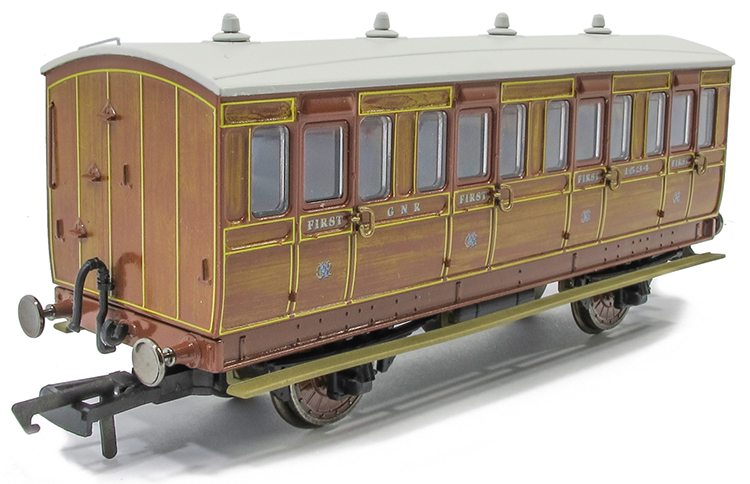 Looking at the four-wheel GNR coach, it is a traditional plastic model with separately-fitted grab handles on the doors. Along the roof is a row of gas light tops, with the appropriate tanks underneath. Others in the range are fitted with oil light tops, except for the SR and BR versions, which have torpedo vents.

On the ends, we have steps and lamp irons. The latter are moulded with very little relief. Some modellers might look to replace them with something that matches the quality of the rest of the model. Separate wire handrails are fitted, but on the review model, they have been pushed into the holes perhaps a little too far – a scale guard would struggle to get a hand behind them.

Moving to the chassis, the footboards are supplied in the pack for the modeller to slot in if required, no glue being necessary to keep them in place. Metal representations of the wooden-centred Mansell coach wheels are fitted and painted to match the coach. Gas tanks and battery boxes are fitted as required. Non-sprung metal buffers are fitted. These are chemically-blackened but the result is shiny and would benefit from some paint to match the vacuum pipes. Standard tension-lock couplings are fitted in NEM pockets.

Decoration is well up to the highest Hornby standards. In the past, the firm developed an impressive system to print teak, and it's used again here. Lining and lettering is spot on with no misalignment of the delicate and multi-coloured lettering and crests. The paint finish is very shiny and for layout use might benefit from a spray of satin varnish, although pre-grouping stock was kept cleaner than it was in the latter days of steam.

Liveries will be the main selling point for these models and, with nine different companies' colours offered, modellers are spoilt for choice. The full range includes first, third and composite coaches, brake thirds and baggage vans, though not all variants are available in all liveries. 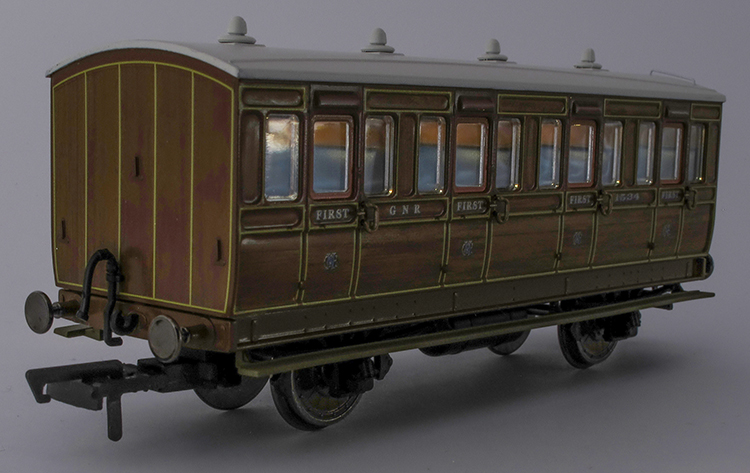 Finally, the models have a 'party piece' because they can be purchased ready-fitted with lights. Hornby's new Maglight system uses small LEDs in a PCB fitted under the roof, powered by a button battery. These can be switched on and off with a magnet included in the pack. Battery life is claimed to be in excess of 200 hours. 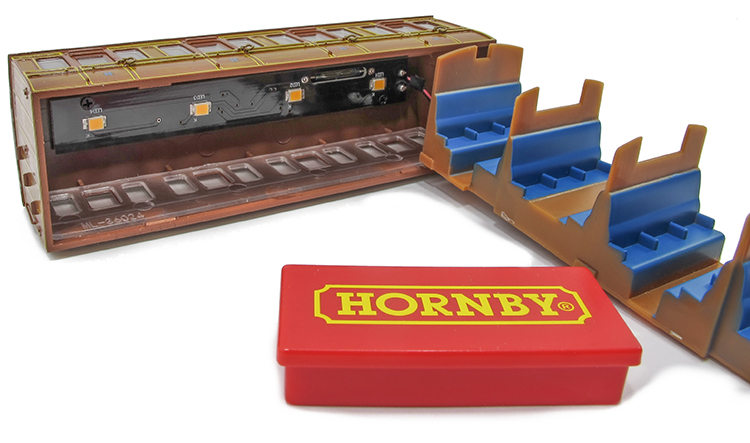 Access to the battery involves unclipping the body from the chassis, best achieved by pulling the two apart on one side. Maglight is available separately to retro-fit to these, and other coaches.

These coaches are sure to be popular with modellers. The fact they aren't a perfect replica of any particular coach isn't likely to be an issue for most. Keenly priced and very attractive, even if you don't model the correct period, they would work well as a vintage train on a preserved line. Anyone building an old branch line, now has the perfect stock with the added benefit that the short models – the four-wheel coach is 115mm long over buffers – will make the layout appear longer.