Introduced in 1937, the streamlined ‘Coronation Scot’ was the answer to the rival LNER’s ‘Coronation’. However, although the LNER train was a new concept (following on from the ‘Silver Jubilee’ of two years earlier), with articulation and ‘streamlined’ cars, the LMS train was made up of ‘blinged-up’ carriages, in a striking silver striped/blue livery and fitted with pressure ventilation. It’s claimed that because LMS carriages of the period were so far ahead of any of the other ‘Big Four’s’ types, a ‘new’ train wasn't needed. It begs the question, why was a new train built just two years later?

For the 1937 train, 27 vehicles were built, marshalled into three, nine-car sets (one for both daily services and one spare). The rakes were comprised of Brake Third Corridor, Third Open, Kitchen Car, Third Open, Third Open, Kitchen Car, First Open, First Corridor and Brake First Corridor. The respective open cars were used for dining. The trains always ran with the third Class leading, and they were hauled by Stanier’s magnificent ‘Princess Coronation’ Pacifics. The services were abandoned during the War, and post-War, individual cars were used in general service trains. All had gone by the early-1960s. 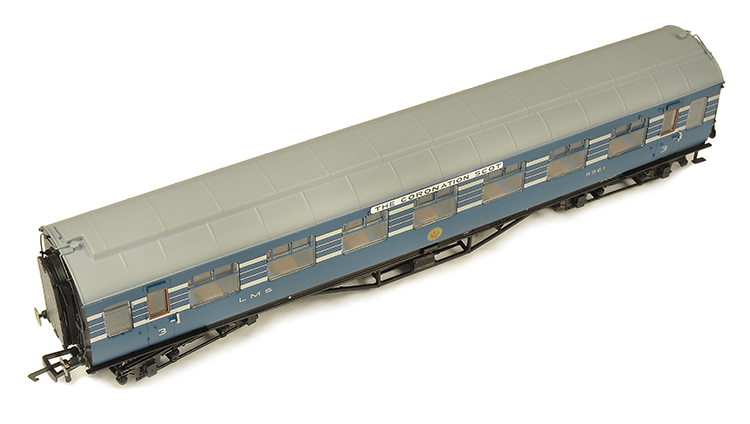 I’ve been sent two types for review, a Third Open and a Kitchen Car. Some elements in these models come from Hornby’s already-established range of LMS carriages (the 57ft underframe on the TO, for instance), but much is new tooling, especially for the Kitchen Car on its 50ft underframe. In fact, attention to different features is incredible. It would have been all too easy for Hornby to fit standard LMS 9ft bogies to the Kitchen Car, but the correct, ex-L&NWR, 8ft ones carry the carriage, unique to the ‘Coronation Scot’ Kitchen Cars; full marks for observation there!

In all dimensions, these cars are spot-on and beautifully-observed. Attention to detail is exquisite, with separate handrails and grab rails provided, only the end conduits being just moulded. All the roof detail – bar the thinnest conduit on the Kitchen Car – consists of separate fittings. The buffers are sprung, and the standard tension-lock couplings extend on negotiating curves. Alternative couplings and longer gangway connectors are supplied for those with more-generous curves. Wheels are true-round and concentric, easily negotiating both hand-built and Peco pointwork. The Kitchen Car is less free-running than the TO, though it’s not stiff. The pick-ups on the wheels for the internal lighting introduce an element of friction, but I don’t think that’s the cause. In no way should it impede a Hornby streamlined ‘Princess Coronation’s’ ability to take the full, nine-car rake. 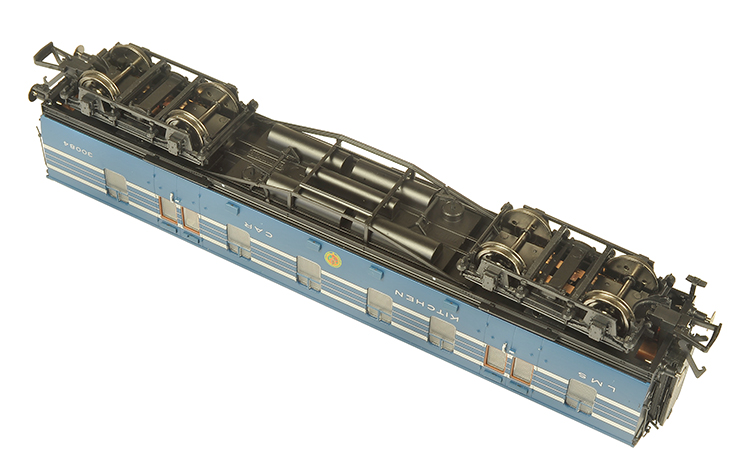 Livery application is wonderful, especially the silver stripes, without evidence of ‘bleed’, even around raised detail and the windows. Branding is equally good. The windows are flush-glazed, with just the slightest hint of a ‘halo’ around the reveals from some angles. The Third Open’s body didn't seem to clip properly into the central slots in the underframe, evident in the photograph, but I’m sure this is an isolated case. 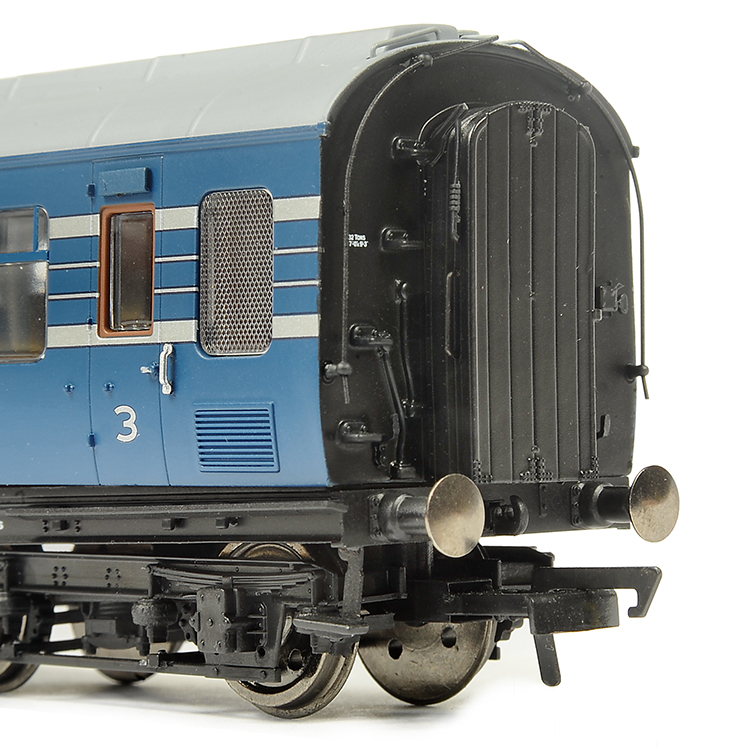 It's another outstanding item of new rolling stock from Hornby. Some years ago, I photographed a complete ‘Coronation Scot’ train, which appeared in BRM. Built entirely from kits by a professional model-maker, it was outstanding, but, no more-outstanding than this at a fraction of the price!