The concept of a diesel-powered railcar was perhaps a little ahead of its time for the GWR. We look at the latest release from Heljan in O gauge, depicting these unsung heroes.

The saviour of passenger services on the Great Western Railway’s branch line routes from the operational difficulties of post-WWI, the company’s innovative railcars proved successful if somewhat lacking in numbers. Arguably, with its access to the rich coalfields of the west and married to its concept of 0-4-2T and 0-6-0 ‘Pannier’ tanks hauling but a few coaches – or, single autocoaches – the concept of a diesel-powered railcar was perhaps a little ahead of its time for the company. 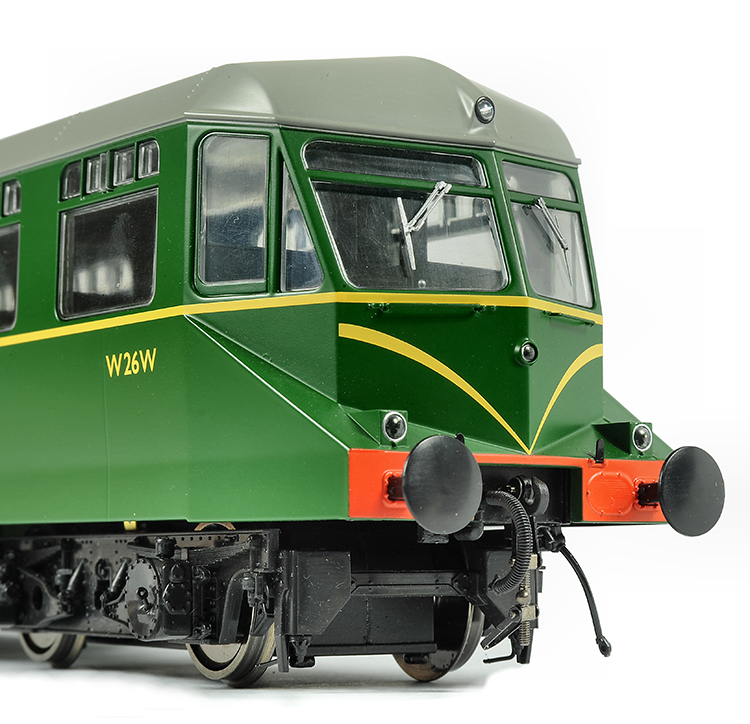 Built conservatively in – for the GWR – relatively small batches, its railcars were an evolution in cutting-edge design and technology for the time. Proposed by C. F. Cleaver of Hardy Railmotors Ltd, a subsidiary of the Associated Equipment Co. Ltd (AEC), the first of its commercial vehicle engine-powered streamlined designs entered service on December 4, 1933. Nicknamed ‘Flying Bananas’ because of their streamlining, this styling would give way to more angular ‘Deco’ shapes with the third batch, from numbers 19 to 33. Referred to as ‘razor edge’, it is of this batch that Heljan’s new model is representative. 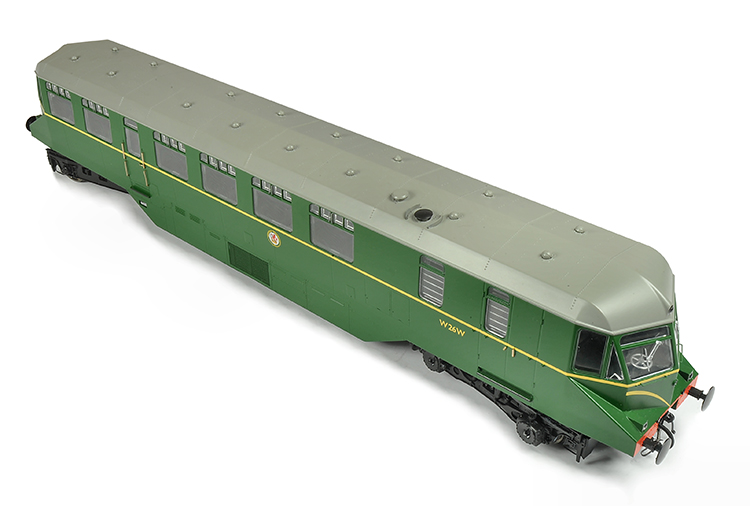 The manufacturer’s new ‘self-contained train’ hits a sweet spot for GWR and Western Region modellers. It’s compact and hence could be used on the smallest of new-build layouts with ease. And, because it represents the twin 9.25-litre AEC-powered variants, with a – for the time – very respectable top speed of 70mph, it can also operate on larger layouts depicting secondary routes, hauling an additional coach, where its speed can be put to use, without slowing down other traffic. 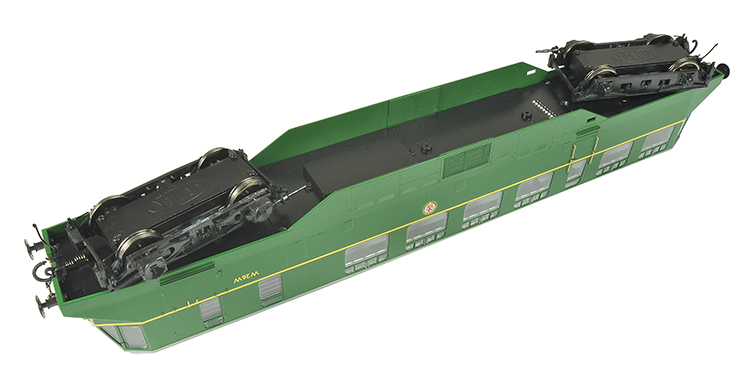 Measuring 460mm over buffers, an exact 65ft 8in to 1:43.5 scale, I checked the scale 8ft 6in bogie wheelbase and scale 43ft 6in bogie centres, too. All critical dimensions are correct. In fact, the scale treatment of the Swindon-built coachwork can’t be faulted, with everything from the almost imperceptible tumblehome of the sides to panel lines, rivet detail, louvred vents, door and window locations looking accurate. The angles of the cab look spot on, too.

Exterior added detail to the injection-moulded bodyshell comprises handrails to the sides and driver’s compartments, etched grille air intakes, windscreen wipers, lamp brackets, screw-link couplings, buffers, and hoses. Simplistic, as per the prototype. That said, the interior is detailed to meet current expectations, access to which – for detailing purposes – is easily gained by removing four screws to the underside and unclipping the bodyshell from the chassis. 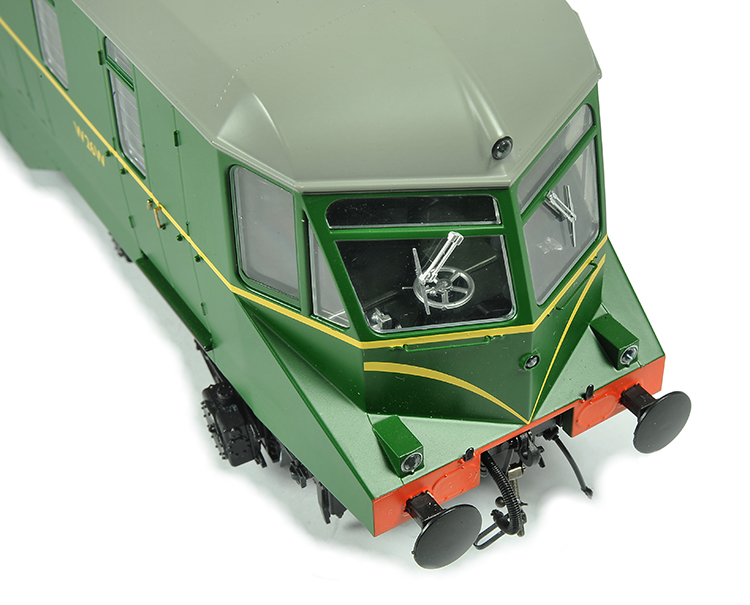 Inside, seating 48 passengers, you’ll find the array of 2+2 bench seating, whose legs run down to a respectable floor level, offering room to install passengers with a little shuffling of legs. Moulded in green plastic, representative of the patterned olive green moquette used on the prototypes, the saloon walls were finished in an easily-wipeable coloured Rexine – a fake leather, with polished mahogany mouldings. It would make a great detailing project.

To the underside, a fail-safe screwed cover can be removed to reveal a 21-pin decoder socket. A decoder isn’t supplied, but purchasers should look to the more generous decoders with a higher amperage output, particularly if looking to haul a few coaches, or running on inclines. Despite the manufacturer recommending in the instructions to run the model in either direction for 30 minutes, I found it exceptionally capable of slow speed crawls straight from the box, and it negotiated complex hand-built track with ease. For smaller layouts, this ability to crawl with ease is its greatest asset, though Heljan models have a reputation for excelling in this department. Its weight – tipping the scales at just over 1.3kg – is more than adequate, and this coupled with all-wheel pickup and ample articulation in the bogie mounts ensures that wheels conform to minor track irregularities. Power is delivered to one bogie via a motor placed horizontally between the two axles, each shaft powering a brass worm, which meshes with the axle-mounted nylon gears. It’s very effective and discreet, the guard’s– and passenger compartments only offering a brief glimpse of the bogie mounting turrets. 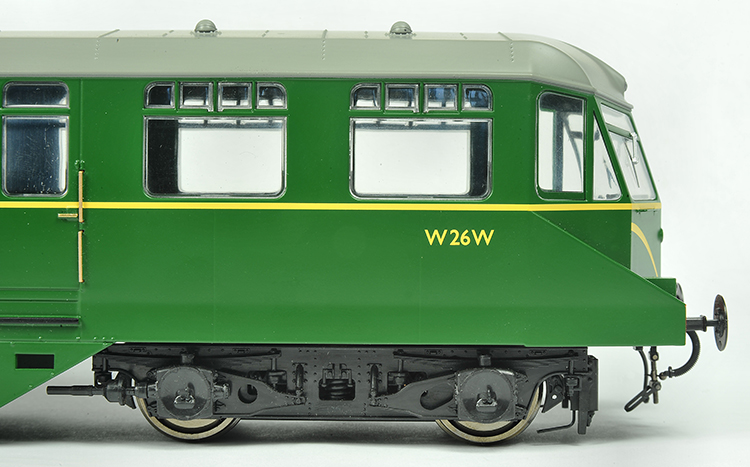 The driver’s compartments are akin to greenhouses, taking no detail prisoner, and despite having some opening windows, must have been very hot to work in when stationary in the brief spells of summer heat. Two blobs of plastic glue securing the glazing were easily seen at one end of our model. However, perhaps more importantly, no parts were loose in the box. For the passengers, roof-mounted ventilators, in addition to the side opening windows are present, these represented on the model, surrounded by rivet detail. I also appreciate the steam-heat boiler exhaust port, though I’d recommend dulling the unpainted black plastic with a spot of matt black paint.
The unusual cardan shaft exterior-driven bogies look authentic, the inner-most large axleboxes to one side of each bogie doubling as final-drive units, complete with oil level dipsticks. These are a nice touch, if slightly over-scale, and though such a detail could have been overlooked, Heljan is to be applauded for including them. Brake blocks and sandpipes align perfectly with wheelsets, and Skefko logos are easily legible under magnification on non-driven axleboxes. 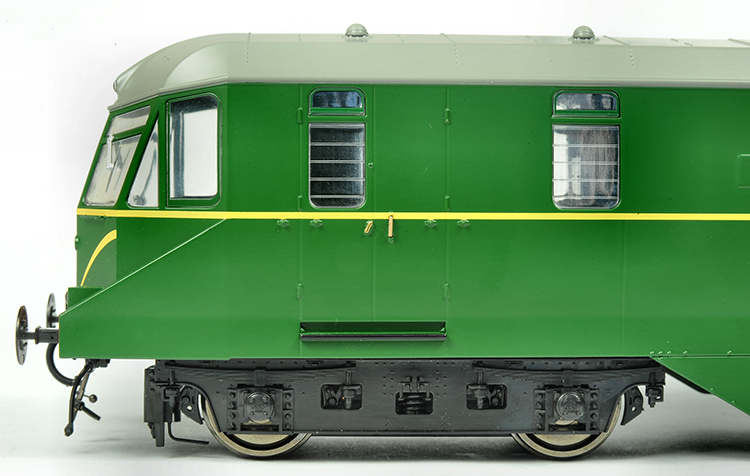 All told, this latest release is exceptional. An entire train for the price of a locomotive – what’s not to like about that? A number of DCC specialists are working on decoder sound file projects to further bring the models to life. Recommended.