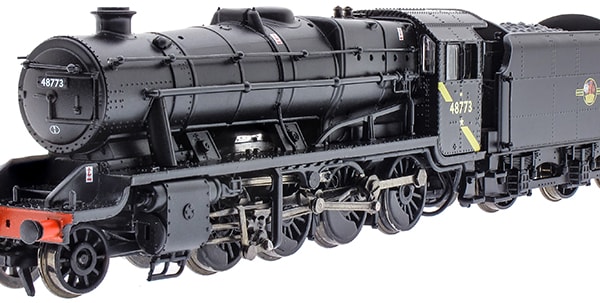 Andy York believes the 8F is one of the most attractive of large freight steam locomotives, but does this model from Graham Farish live up to expectations?

Where to start? The history of the 852 Stanier 8Fs is complex and interesting, so we’ll take our review sample of DCC sound-fitted 48773 in BR late crest livery as a specific example.

Built in 1940 by the North British Locomotive Company as one of the 208 locomotives for the War Department to the LMS design of William Stanier, it was intended to be shipped to France. The Ministry had decided that the 8F was to be the ‘standard’ design of heavy freight locomotives for WWII in the same vein that the Robinson 8K of the Great Central Railway was adopted as the ‘standard’ of the Great War for the Railway Operating Division for use at home and overseas. With the fall of France, WD307, as the locomotive had been numbered, was loaned to the LMS to bolster its 331 locomotives built from 1935 at Crewe, Horwich, by North British and the Vulcan Foundry. 1941 saw this 8F head for Persia for three years before being re-deployed to the Suez Zone in Egypt. It then returned to the UK after the war to be renumbered as 70307 for use on the Longmoor Military Railway. Eventually, the locomotive was formally purchased by British Railways in 1957, receiving its number, 48773, on allocation to Polmadie. It would move southwards to Kingmoor in 1963, Edgeley and then Bolton in 1964, where it remained until 1968 when it was allocated to Rose Grove near Burnley. Here, it would become one of the last 8Fs in service, with its final role in the ‘Farewell to Steam’ specials of August 4, 1968. Thankfully, 48773 survived into the preservation era, and since the end of its boiler ticket in 2009, it has been displayed in The Engine House on the Severn Valley Railway.

One for the rivet counters – knock yourself out, there are hundreds!

In addition to the LMS and WD examples (built by North British and Beyer Peacock), 245 8Fs were ordered by the Railway Executive Committee for use across the national network, to be built at Swindon, Darlington, Doncaster, Eastleigh, Ashford and Brighton. The LNER also ordered 68 locomotives built at Darlington, Doncaster and Brighton, classifying them as Class O6, an example of which has been included in the Farish range. In total, 852 locomotives were built, some never returning from overseas. With much loaning, requisitioning and selling between divisions, it’s always interesting to look back at the history of specific locomotives. 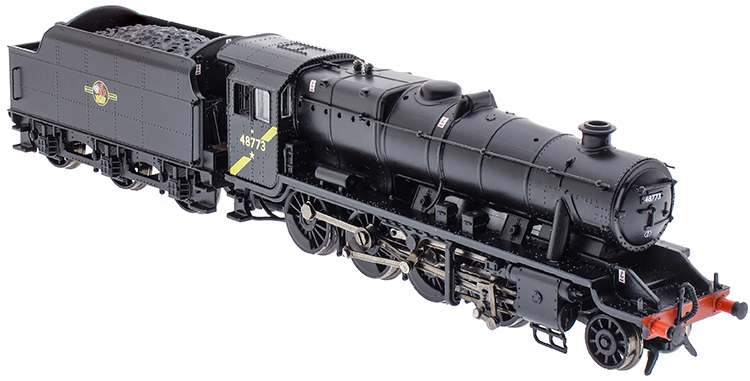 With little variation – aside from right-hand drive for some overseas use – and riveted or welded tenders, the type is an ideal basis for a model and it’s hugely pleasing to see this model from Graham Farish to a contemporary standard. It's a massive leap forward from the previous version that dated back to 1986. The pre-production samples certainly whetted the appetite, but the true nature only emerges when you see the production liveries. Of course, it’s principally an “any colour you like so long as it’s black” – apart from military use and a controversial preservation livery – but the decoration can have numerous permutations. 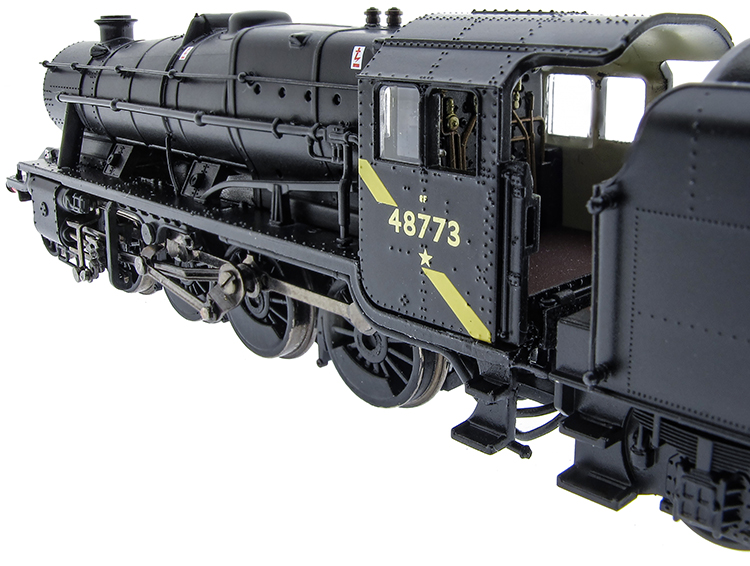 Our review sample sports the yellow cabside stripe indicating that it should not be used “South of Crewe” on electrified lines. Even so, it carries overhead electrification warning flashes and a yellow star beneath the cabside number, denoting that the locomotive had specially balanced wheelsets and motion permitting use on fast vacuum-braked freight workings.

Farish has included an LNER and LMS black-liveried examples in this launch, along with an early emblem BR version as DCC-ready models. The model as reviewed carries a late crest and is sound-fitted with a Zimo MX658N18 decoder. The speaker for this is mounted, with the PCB and decoder in the tender body, which unclips from the chassis for easy access to maintenance points without disassembly. If you aren't a DCC user, the basic sound functions work with a gentle hiss when there is power until the locomotive starts moving, where speed-dependent sounds come into effect. Easing off the power as the model slows brings in suitable coasting sounds, not just reduced power noises. Under DCC control, the 28 functions are accessible with all the expected sounds, plus additional whistles and voices. Full instructions for this are included along with the usual maintenance leaflet. 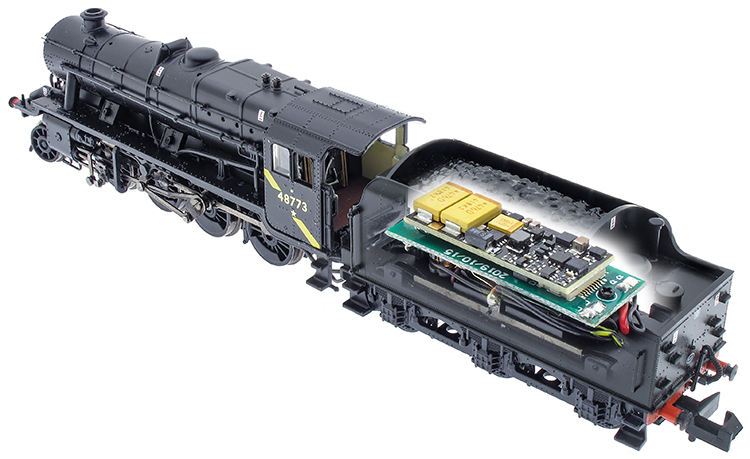 The sound decoder and speaker comfortably fit in the tender, which simply unclips. The all-important sounds are available to analogue users, too.

The accessory pack includes coupling hooks, a snowplough to be mounted in lieu of the front coupling, steps for the front of the running plate if curves permit, additional injector pipework and cab doors to bridge the commendably short cab to tender space.

From the box, performance has been silky-smooth, with electrical pick-up from driving and tender wheels. I haven’t reached the limitations of performance, but ten Mk. 1 coaches on the flat do not seem to have troubled it. However, I will be sending it onwards for further testing on gradients. 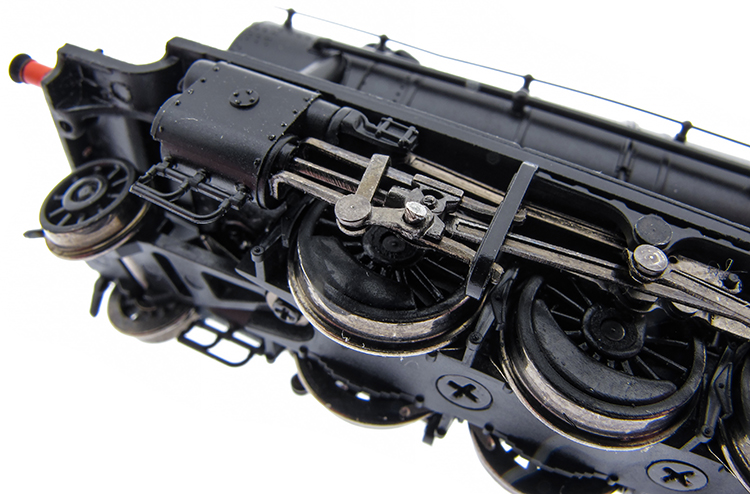 To enable the model to handle second radius curves, the motion is a little over width, but not offensively so.

I have always felt that the 8F is the most attractive of large freight steam locomotives and it’s great to see a product to this standard – we deserve a 4mm:1ft scale model to the same standards now.