Eight variants of the North British Locomotive Company Type 2 diesel-electric has Howard Smith suitably impressed in the release of this first batch of models from Dapol.

The transition from steam to diesel and electric motive power under British Railways Modernisation Plan offered more success stories than failures. In the interests of evaluating designs from different manufacturers before proceeding with large orders, BR ordered small batches of locomotives from constructors for its dieselisation pilot scheme. It sought to replace its steam fleet of different power classifications with like-for-like locomotives.
Most designs were successful, but some weren’t – like the prototype on which Dapol’s latest models are based – The North British Locomotive Company’s type two diesel-electrics. These unfortunate creations were among the last to appear from – at the time – Europe’s largest locomotive manufacturing company.

Brief Experiment
The Class of 58 was introduced to the Eastern Region from 1958. The MAN L12V18/21S power units – built in-house under licence – resulted in the class achieving a remarkably low availability of just 51%. It could be argued that the engine failures were because of the language and metric measurement barriers of the German design, which weren’t constructed to the required tolerances, by a workforce more familiar with the construction of steam locomotives. Oil leaks and insufficient cooling ensued and so numerous were their problems, that just two years later, many of the class were stored in New England Yard, Peterborough, pending a solution. The national press was quick to make a story from new locomotives breaking.
The Scottish Region drew the short straw, receiving the Class in 1960, keeping the locomotives closer to the constructor's home and its workforce occupied through regular repair and maintenance, beyond the routine intervals expected. Two years later, through strain from repairs under warranty and reduced orders, The North British Locomotive Company with its 2658-strong workforce was liquidated.
Meanwhile, for BR, a solution to the engine problems was sought and from 1963, D6123 was fitted with a more powerful Paxman power unit. The modification would be rolled out to 19 other class members which became Class 29 under TOPs. None survived to receive TOPs numbering, the last of the Class 29s, based at Eastfield, being withdrawn from service on December 31, 1971. 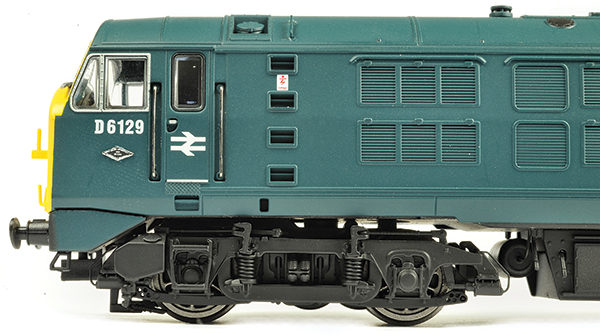 The jury is out on whether the North British Locomotive Company's diesel-electric design was good-looking. That said, Dapol has captured its quirks to perfection, spoked wheels included.

Miniature tribute
None of the Class 21 or 29 locomotives survived the cutter’s torch, so Dapol’s models have been created from drawings and archive photographs, with tooling modifications to accommodate the class as built and as rebuilt from 1963. An impressive eight variants are offered in this first batch – four in Class 21 guise in BR green, of which two with small yellow warning panels, and four in Class 29 guise, of which, two in BR blue and two in two-tone green, all with variations to their yellow warning panels.
Kindly received for review from Dapol is D6129, a Class 29 in BR blue with full yellow warning panels, but these don’t extend as high as those on its model of D6107. Tooling variations between this and its Class 21 siblings see the repositioning of windscreen wipers from window tops to the bottom, the addition of headcode panels, the welding up of front doors and changes to the locations of running lights. The change of side windows to vents and additional side ventilation in a bid to reduce engine room temperatures has also been considered.

Switch on/switch off – configurable lighting to the underside is clearly labelled for ease of use.

Design quirks
The Class 21 and 29 looks quite alien to many other British diesel-electric locomotive designs. The exterior of these compact locomotives was cluttered with numerous small vents instead of fewer, larger side grilles. Early boiler feed access steps didn’t aid its appeal and spoked wheels on this diesel-electric are a nod to the more familiar territory of its builder. It’s a challenge to capture so many intricacies on a model, yet Dapol has succeeded.
The etched roof and side grilles and separately-fitted handrails look great, though I feel the glazing is a touch prismatic. The subtle bodyside fold is noticeable when viewed from the correct angle.
Bogies are well captured and I’m particularly fond of the leaf and coil spring detail. The side frames offer sufficient heft, too. The large angular sandboxes can’t be missed, yet the small air pipes running to brake cylinders haven’t been overlooked.

From cylinder to shoe, the brake mechanism workings and 'what pulls or pushes on what' can be figured out because all is faithfully visible.

On test
The bogies have been well-designed. Powered by a centrally-mounted five-pole motor with flywheels, cardan shafts transfer power to each bogie and a gear train links this to each of the axles with die-cast wheels. The discreet method allows realistic levels of visible daylight between much of the locomotive bodyshell and the bogies when viewed from a low angle. Delivery of power was smooth and combined with its 363g weight, it’s ideal motive power for typical mixed-traffic duties of several coaches or short freight workings, or more if worked in pairs. Buffers have a realistic sprung weight, too.

Efficient lighting
For the first time on an RTR model, configuring the lighting without referring to the instructions isn’t a mystery. To the underside of the battery box, four discreet switches are clearly labelled for cab lights, head or rear tail lights for the Class 21 or route indicator boxes, in the case of the Class 29. The independent control of the lights offers DC users greater operational flexibility, though factory-fitted DCC models have lighting arranged so that either ‘light engine’ or ‘push/pull’ mode can be chosen. Default lighting options on factory-fitted DCC models can be chosen using F0, F1, F2, F3 and F4. Models are fitted with an MTC 21-pin socket, offering a flexible choice of decoder for the modeller.

In summary
Perhaps not as mainstream for modellers as other Type 2 forms of motive power, such as the Class 20s, Dapol’s model fills another void in the line-up of BR pilot-scheme locomotives. A great deal of positivity surrounds its first batch of models and small glazing niggles aside, I can offer nothing but praise. Though this batch doesn’t include the GNS-area locomotives fitted with tablet catchers and sliding cabside windows, based at Kittibrewster, this tooling decision would be difficult to justify. Perhaps some modellers might be willing to attempt a conversion on their model? If so, I’d like to see their efforts. A recommended model that ironically, will no doubt outlast the career lengths of their prototypes.