Tony Wright studies the latest model from the Chirk manufacturer, and feels impressed.

These long-lived and wide-ranging 2-6-0s have always been popular with railway enthusiasts, both those who follow the full-sized ones and those who build models. Based firmly on Churchward’s design principles, 342 of these ‘Moguls’ were built by the GWR between 1911 and 1932. The last batch built differed in having a side-window cab. They were really tender versions of the successful 3150 2-6-2Ts. Some later received distinctive outside steampipes. 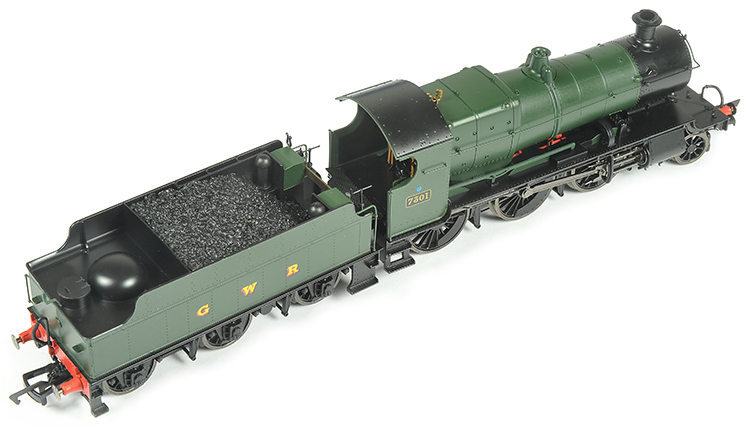 Withdrawals began as early as 1936 when nearly a third of the number was used as a basis for the building of the ‘Granges’ and the ‘Manors’. However, the last survivors were not taken out of service until as late as 1964, with two being preserved. Their blue route status meant they could travel on almost all the GWR lines (including the Cambrian) and those of the Western Region of BR.

Many years ago, an RTR model was made of this class in OO gauge by Palitoy/Mainline, featuring a split-chassis. At the time it was considered ‘outstanding’ (particularly in its appearance), but this new Dapol example supersedes that in every department. Checking the dimensions against the drawings at my disposal, it corresponds exactly in almost every department. Bodywork detail is extremely crisp and well-represented with many separate fittings. Nothing is over-stated and clumsy; ‘perfection in miniature’? The buffers are sprung. Apart from the train heating pipe (which would foul the tension-lock at the front if attached), there is no detail required for the purchaser to fit. Back head detail is exceptional, as we've come to expect from the manufacturer.

Running-wise, I found it extremely responsive, capable (even on analogue, via an ancient H&M ‘Clipper’) of excellent slow-speed performance, uniform acceleration – with a top speed well in excess of its prototype – and with adequate haulage-capacity. Another ingenious idea, which the manufacturer has pioneered, is the removal of the decoder PCB with its Next-18 socket. Access for fitting the decoder is by removing the smokebox door. I found the plastic ‘smokebox door opening tool' difficult to use, such was the tight fit of the door, and resorted to carefully prising out the door with a curved craft blade. Success, only to find that the smokebox door dart disappeared! A replacement smokebox door is available as a spare part. Provision is made to fit a speaker underneath the PCB in the smokebox, and another in the tender. 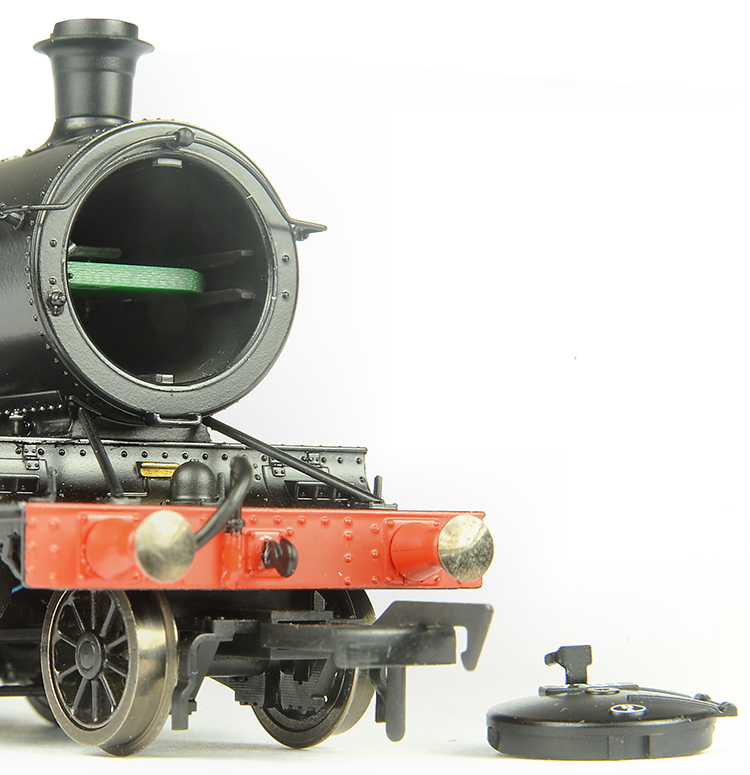 Speaking of the locomotive-to-tender connection – at last one which is brilliantly-simple, yet totally effective. It’s just a plug-together device that gives full mechanical and electrical efficacy. No fiddling with plug-together electrical shackles is required and, even better, the locomotive will run without its tender. 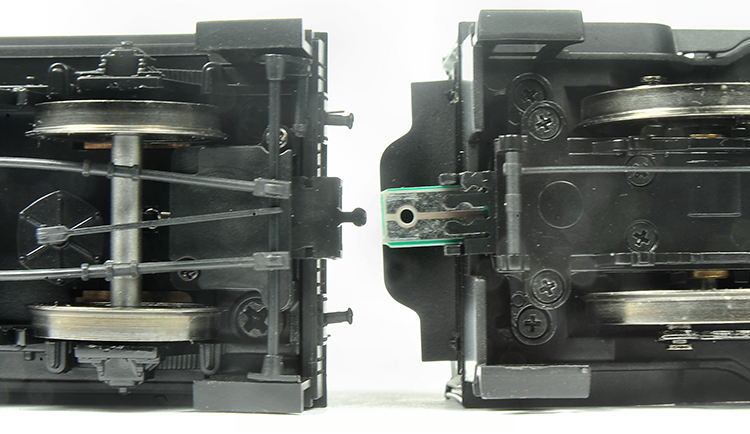 All the wheels are true-round and concentric with consistent back-to-backs and RP25 profiles. The locomotive hadn't the slightest problem running through hand-built and industry-standard Peco track. The cranks give the characteristic 30in GWR throw, but the slidebar ends are the incorrect profile to accommodate this; they’re forked on their inside faces to clear the connecting rod, when they should be straight. It looks as if the crosshead depth isn’t enough, resulting in the slidebars being too close together.

Separating the body from the chassis proved to be ‘interesting’ because the instruction leaflet doesn't show how this is done, but identifying which screws to undo is simple. Be careful when removing these screws (one fore, two aft), because the slidebars, cylinder ends and cylinders are kept together by the body being in-situ.

To fully release the body, the decoder mounting needs taking out through the smokebox door. The 3,500 gallon Churchward tender is an equally good model and is sufficiently ballasted to give excellent and stable running, with no sign of bouncing or wobbling under load. As with the locomotive, this has electrical pick-ups for reliability. 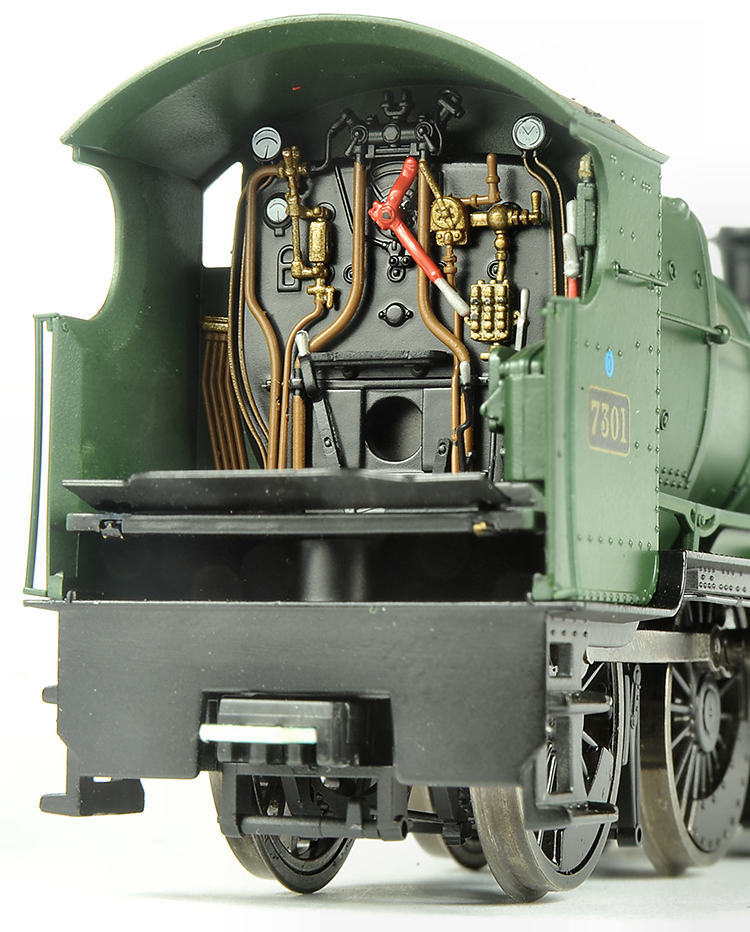 The livery application is superb, though, with all GWR numberplate representations, replacement etched plates would enhance the locomotive further. The lining on the BR example is excellent. Interestingly, this GWR-liveried example has a BR front numberplate and shedplate fitted – a little variety for your locomotive fleet, perhaps? Further differences between the locomotives produced accommodate Churchward taper or Collett straight shank buffers, smokeboxes with and without cylinder steam pipes, tall or low vacuum pipes, tall or short safety valve covers, and changes to the mounting location for the lamp bracket – truly impressive.

In conclusion – a superlative new model at an excellent price.

Watch this model in action – download the February 2021 digital edition of BRM from www.pocketmags.com/BRM