Following other military wagons such as Hattons and Oxford Rail’s 'Warwell', the interest in complementary vehicles has increased, so the KFA ‘Warflat’ is a much-requested wagon in OO scale, appearing high on the annual polls and wish lists for several years. Trains4U of Peterborough commissioned Cavalex to produce an exclusive model, which is now approaching delivery.

65 'Warflats' were built at Shildon for the Ministry of Defence between 1976 and 1981 to replace ageing wagons from WWI and WWII eras, originally built with through vacuum piping in addition to the air brakes. With the TOPS classification PFB, they were converted for air-braked use only during the 1990s. Some received the PFA code before the K prefix came into use (KFB/KFA). These wagons are primarily used for transporting soft skin and light-armoured vehicles and can accommodate three short wheelbase Land Rovers, but can be used for a variety of loads including bridges and even steam locomotives. 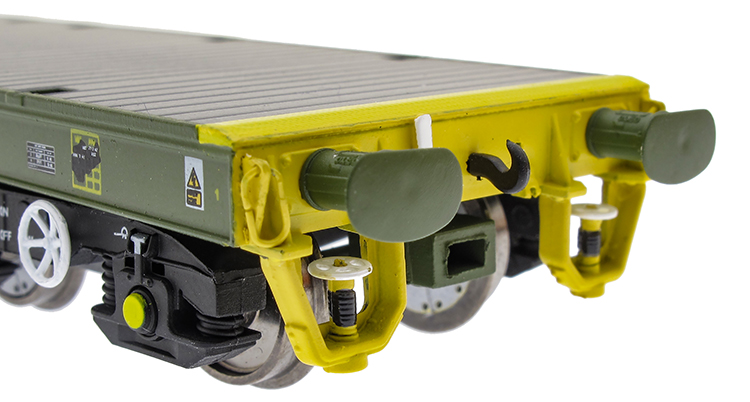 While some of these 'Warflats' have been withdrawn, KFAs are still in wide use by the MOD today. Some have been repurposed and can be found as internal wagons in some steelworks thanks to their 50T capacity. The KFA is a very versatile wagon and can be seen running in long rakes, or in smaller numbers, even ones or twos, mixed in with other common wagon types, like 'Warwells', OCAs, and VBA, VDA, or VGA vans. Trains4U has commissioned the wagon in dual-braked form in plain olive-green livery suitable for use through to the 1990s, and in air-braked only form with the yellow ends for the late-1990s onwards with four differently-numbered variants in each form and a variety of markings replicating the prototype.

The initial impression of the wagon is one of solidity with its lovely 90g of weight attained by the use of a zinc alloy chassis and solebar members. The plastic deck surface allows for fine replication of planking, strapping eyes and recesses. The ends of the wagon are interesting and perfectly capture the look of the original with very fine screw-jacks, which were used for stabilizing the wagons while loading. The flat-topped Oleo buffers, which are lightly sprung, have been captured well so that when the gap between wagons is bridged, vehicles can be driven along the train length. 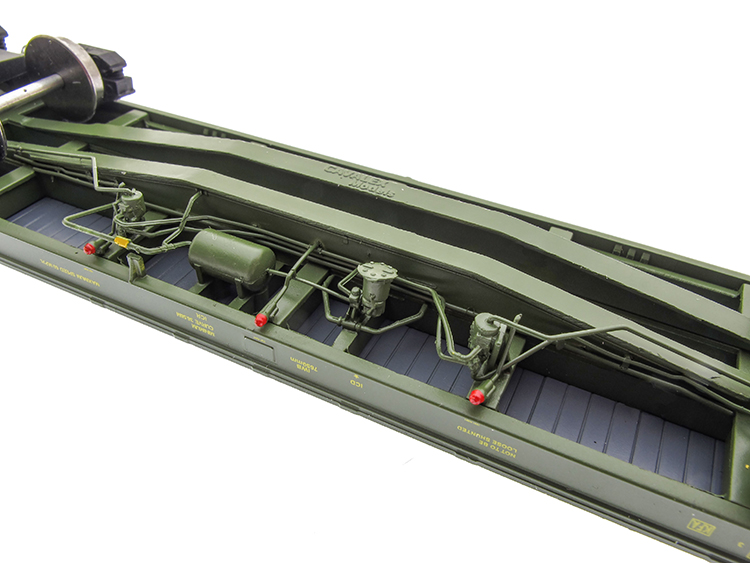 Turning the wagon over, the brake cylinders and associated piping are all individual parts, but robust thanks to the use of wiring for the pipes. The bogies have good side detail and depth while allowing for the wheelsets to be swapped out by EM and P4 modellers. Each wheelset has etched brass brake disc inserts on both the outer and inner faces of one wheel with the orientation of the axle alternated on each bogie. The minimal clearance between bogie and chassis is as good as seen on any bogie wagon. At first glance, it may look as though the rotation is restricted, but the wagons performed perfectly well around first radius curves – but no tighter than that! 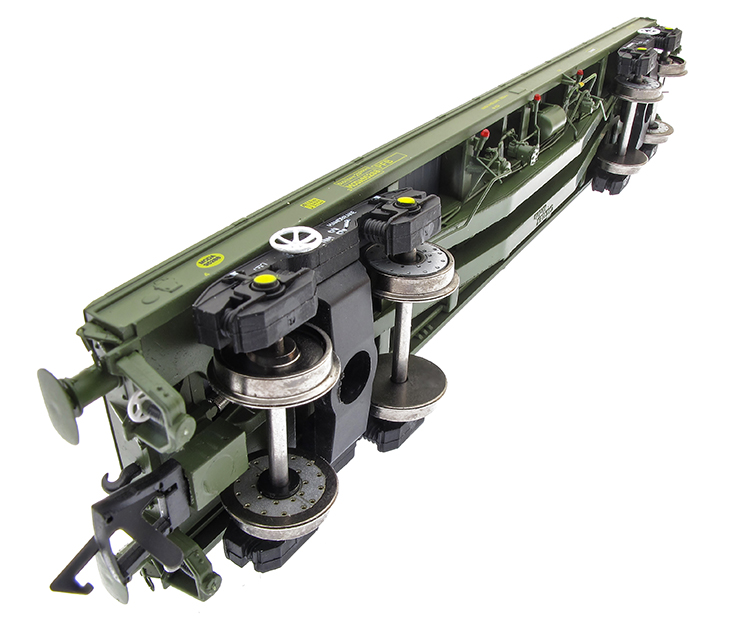 While the decoration echoing military style is simple, it is exceptionally fine and clear and neatly rounds off the examination of a wagon that falls into the exceptional category of modern ready-to-run products. In addition to the wagon, Trains4U has produced some wonderfully fine 3D-printed metal wheel chocks of the type used since the 1990s, which are available in packs of 12, unpainted and painted.