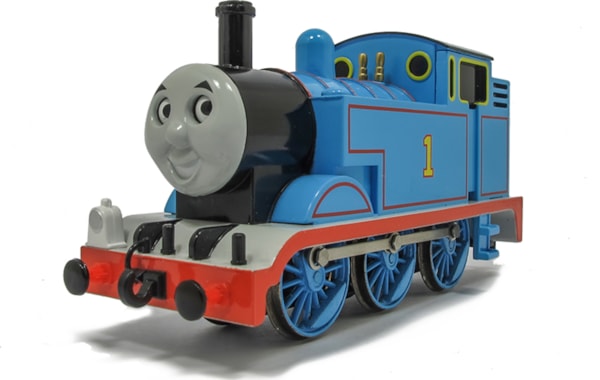 Phil Parker can’t help but be impressed with this new faithfully-recreated version of Thomas and his coaches.

Thomas the Tank Engine was first born thanks to post-war austerity. When his young son, Christopher, asked for a model of Gordon from his bedtime stories, the Rev. Awdry found himself without sufficient material, so built a blue tank engine instead. The youngster then demanded stories for this new locomotive – the rest is history. 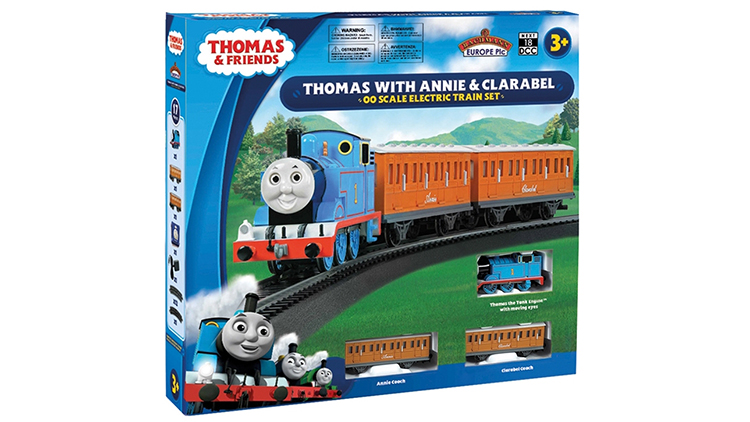 Officially, Thomas is based on the London, Brighton & South Coast Railway's E2 class. When Hornby held the licence for the models until last year, it used their model of the class with the addition of a face on the front. The only trouble with this is, if you look at either the illustrations by Reginald Payne and modified by C. Reginald Dalby in the books, or the TV series, his proportions are quite different to the engine.

Bachmann's Thomas, which has been available in the USA for some time, makes a good job of modelling the character seen on both page and screen. The result is a far shorter model than a scale E2, more 'cartoonish', but in keeping with the locomotive we know and love.

Trying to judge accuracy isn't helped by variations in the books and between the early model-based TV series and later CGI version. Even his body colour varies – Bachmann has matched the photograph in my 1970 edition of Thomas the Tank Engine, though it's too light for the early TV shows and some later books, but correct for the CGI versions. 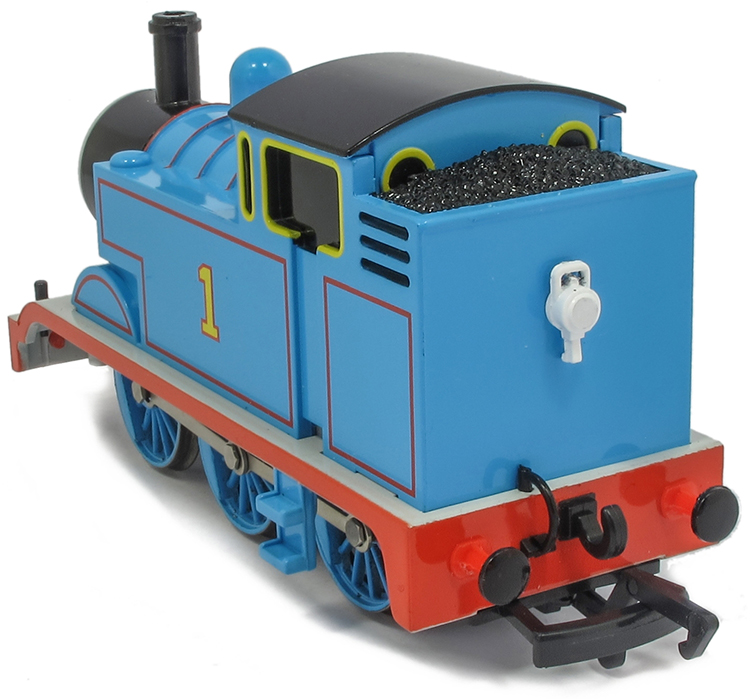 A tension-lock coupling is only fitted at the back, though provision has been made at the front should you wish to add one.

Being picky, the wheels are small compared to the books, but right for TV and wouldn't require the driver to leap over them to get into the cab. I suspect the good Reverend would approve of this. Talking of drivers, the cab openings are blind, so you can't fit a crew. There's also only one coupling, fitted to the back, but the footplate is moulded so a spare unit could be screwed in place if desired for shunting.

As for rivets, CGI Thomas has them, but none of the other versions has, and this model's tanks are also plain.
However, little of this is important for those this model is aimed at. It looks like Thomas and, excitingly, his eyes swivel as he runs. A clever gear train driven by the can motor that also powers the wheels handles this. It's a gimmick, but really well done; the swivelling is slow and surprisingly realistic. 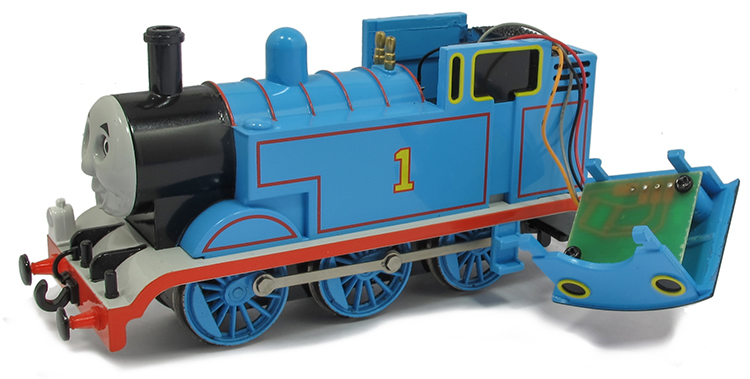 The cab roof unclips to give access to the circuit board. Undo the screws in the corners to reveal the Next 18 DCC socket.

Supplied as DCC-ready, fitting a chip is simple. The cab roof unclips and the socket is screwed underneath. A pair of cross-head screws are undone and the Next 18 socket is revealed. Replacing the blanking plate will be easy, and there should be enough space in the bunker for a sugar cube speaker. Hopefully, one of our DCC sound decoder suppliers is already busy recording some suitable Thomas phrases to play out.

Running is smooth, easily as good as any other RTR model, and it's possible to drive slowly for shunting. Our sample is an early example, which has seen many miles of testing at trade events, yet still works perfectly, suggesting a long life in the playroom. 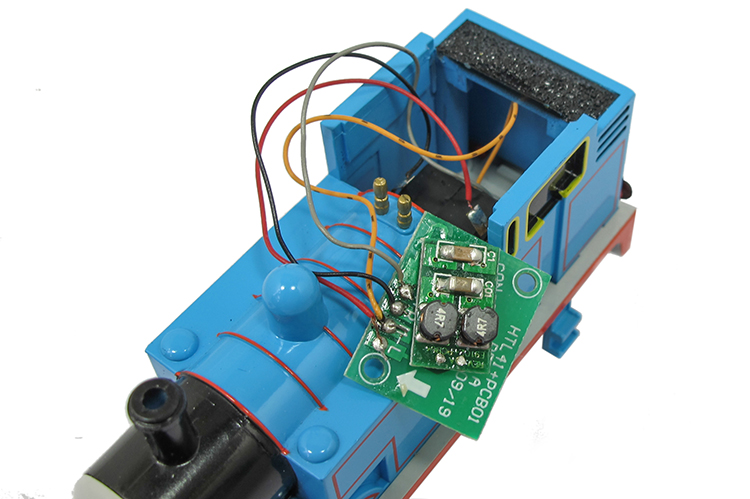 Of course, you can't have Thomas without his coaches. Annie and Clarabel are modelled on the TV Thomas as they are four-wheelers, loosely based on LBSC Stroudley Coaches. Both coaches are identical apart from the names, although as a brake, Clarabel should have slightly different compartments. The moulding is simplified and there is no tumblehome. This is perfect for robust toys, but modellers looking to re-paint them for 'serious' use will be disappointed. With pre-grouping coaches soon to be being offered RTR in the scale, the kids won't need to hide theirs. You do get metal wheels though, so they run freely. 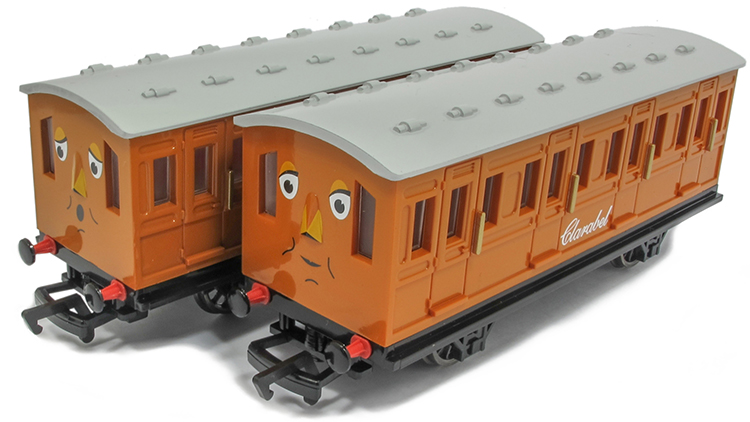 At 117mm over the buffers, the coaches seem long compared to past models, but they are right for the TV examples. The colours of these changed over time and have definitely become more orange, which matches the models.

Children of all ages will be delighted with this new faithfully recreated version of Thomas and his coaches. I've no doubt that many collectors and layout operators will find space for a little blue locomotive very quickly and when exhibitions return, he'll be a regular crowd-pleaser when there are youngsters lining the barriers. In the meantime, what better start for introducing kids to the hobby?