A surprise announcement in May from Bachmann was the firm's first narrow-gauge passenger vehicle. It had previously announced production of an earlier style wooden-panelled Gloucester coach, as used on the Ashover Railway. This version is different.

The model portrays a steel-bodied vehicle of continental origin and has previously been produced for Bachmann’s Liliput HOe range in Austrian Zillertal Railway liveries. This may not be as anomalous to a British narrow-gauge layout as the first impression might give – the Welshpool and Llanfair Railway has older ex-Zillertalbahn vehicles, and more recent vehicles with similar roof profiles and side windows.

There has been recent discussion on RMweb that narrow-gauge modellers have a greater tendency to model fictitious lines than standard-gauge modellers, so its usefulness shouldn’t be underestimated. It doesn’t look completely out of place.

The third-class open vehicle is appealingly decorated in a choice of maroon and cream, or lined green liveries with metallic framing to the windows. One may get the impression that this is an air-conditioned vehicle with the absence of toplights and roof ventilation, but in typical continental style, the entire windows are of the type that drop into the bodyside. 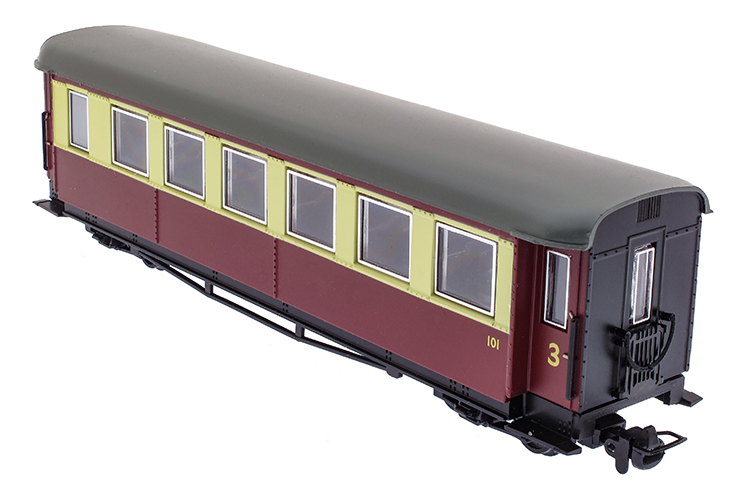 The body simply unclips from the chassis to access the interior, with single seats either side of the central gangway with one side featuring a toilet compartment. The weighted chassis gives stable running through pointwork – this is quite a wide-bodied vehicle to be running on 9mm gauge track, but it performs well.

It’s a little bit left-field, but a welcome addition to the range to give increased variety for a growing number of OO9 gauge modellers.