The updating of this OO gauge model to include the different vehicle shows that there remains value in similar tooling. Andy York takes a closer look.

Around 10 years ago, Bachmann introduced the first model EMU to modern production standards in the form of the 4-CEP to much acclaim, inspiring many third-rail layouts. To form a complete 12-car set as introduced for the Kent-Coast electrification scheme, a 4-BEP with its Buffet Car (rather than Trailer Second) would have been necessary and a few modellers began altering sets, but finally, we can now run prototypical sets. Not only will the model in its two liveries at launch appeal to those with existing 4-CEP sets, but it will once again stimulate sales of the original 4-CEP unit, which is being made available again at the same time.

Ordered alongside the 4-CEP (later Class 411) Electric Multiple Units, the British Rail 4-BEPs (later Class 410) were four-car EMUs built at BR’s Eastleigh Works between 1957 and 1961 to operate on the newly-electrified main lines in Kent. Based on the BR Mk. 1 bodyshell, the BEPs (Buffet EPB) differed from the CEPs (Corridor EPB) by having a Buffet Car in place of the TSK standard trailer cars. When BR came to refurbish the units, some remained as BEPs but others were reformed into CEPs due to the reduced requirements for catering facilities. The remaining BEPs became Class 412/3s following refurbishment.

Bachmann’s 4-BEP, as with the 4-CEP, is presented in original guise prior to the refurbishment from 1979 onwards where the windows were converted to hopper style and reconfiguration of the guard's compartments. As such, the liveries that are applicable to this model are green (with or without warning panels) and blue/grey from the late 1960s onwards. Our review sample sports the latter livery, with typical quality and exactness of livery elements, as unit number 7010, allocated to Ramsgate depot prior to its refurbishment at Swindon at the end of May 1981.

The Trailer Buffet (TRB) vehicle is a newly-tooled vehicle, differing from other Bachmann catering vehicles. The chassis, with correctly-positioned battery boxes and tanks for kitchen utilities, doesn't have buffers as inter-vehicle connections were buckeye couplings. Cosmetic versions of these are included in the accessory pack. While the rest of the cars sit upon BR.1 bogies, the TRB correctly sits on Commonwealth bogies for smoother riding.

The model is powered by the leading bogie of one of the MBSO vehicles with space for fitting a 21-pin DCC decoder and speaker beneath the seating. As the model features directional and cab lighting, the inter-car rigid bar connectors (of the simple two connection variety familiar to CEP owners) mean only one decoder is required for the lighting to work correctly. This should be fitted to the unpowered MBSO at the other end. Performance is as expected, with no pick-up issues and near-silent silk-smooth motion straight from the box.

The two-character headcode on the powered MBSO is supplied as 90, which is the Charing Cross to Margate route, and the unpowered MBSO shows the two red blinds denoting the tail. As the BEP unit was most frequently marshalled in the middle of the two CEP units, the headcodes may be academic, but an alternative door and headcode panel is supplied with a 40 headcode, which covers a Charing Cross to Dartford via Sidcup service. 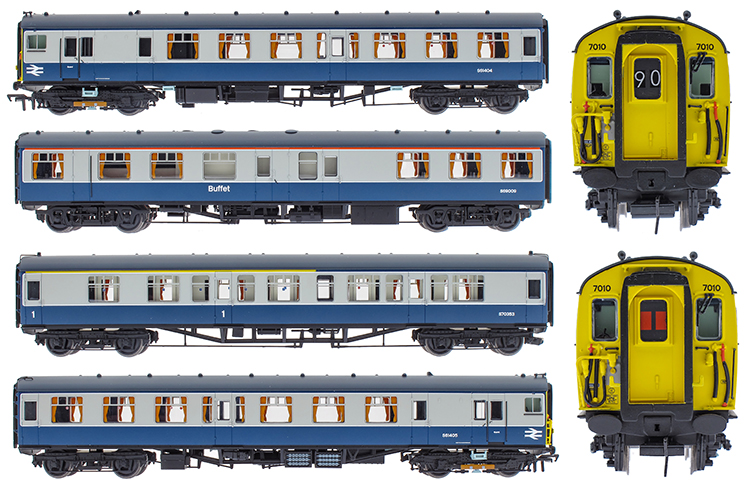 Some modellers feel that a model is ‘outdated’ if it’s a decade old. However, it’s worth assessing the vehicles from the CEP as they stand, and the tooling, accuracy and quality of finish wouldn’t be bettered if this was a newly-released item now. Externally, a new model might have sprung buffers but, seriously, who can tell the visual difference and how many modellers have operations that would benefit from sprung buffers on a unit? Maybe if the CEP were released now it would have additional electrical functionality.

The updating of this model to include the different vehicle shows that there remains value in similar tooling – Bachmann still has the original 4-CEP in blue/grey and green livery with small yellow warning panels in its range in pristine and weathered forms. Perhaps it’s time to add to your third-rail fleet?