Intrigued by this latest EMU from Bachmann, Andy York takes a closer look.

The 2-HAP Class 414 follows in the footsteps of the popular 4-CEP, 2-EPB and MLV models, extending the range of Southern Region EMUs available in the Bachmann Branchline range. 209 units were built by British Railways between 1956 and 1963, the first 36 units (5601-5636) being built on the underframes of withdrawn units, while the Bachmann model is one of the main series (6001-6173), which were all-new. The two-car units were initially used on outer suburban units operating local and semi-fast services on the Southern Region’s South Eastern division alongside 4-CEPs.

Low viewing angles highlight how much detail has been replicated below solebar level, elements that readily distinguish it from the earlier EPB model.

Later movements and reconfigurations saw wider use, with 1969 seeing allocations in the South Western Division from 1969 for outer-suburban use and on Central Division coastal services from 1972, with most units working away from the South Eastern Division before a return in later years.

The last Class 414 units were withdrawn from passenger service in 1995, although some passed into departmental use. Two units have been preserved including No. 4308 with the National Railway Museum, which is being cosmetically restored in a joint project by members of the Network SouthEast Society and the NRM.

A magnifying glass will be needed to read all of the detail on the ends of the units, fine decoration indeed.

When Bachmann introduced the 2-EPB unit, modellers saw the potential to pair the Driving Motor Brake car with that of the trailer of the 2H produced for Kernow MRC to create a 2-HAP, but this model is not utilisation of existing tooling as it’s clear there are many differences beyond body shape and window and door configuration. The tooling for these vehicles is new, which is most readily evidenced on the roof of each car with less in the way of conduits on the 2-HAP and significant differences in the equipment below solebar level. This means that Bachmann still has the capability to produced 2-EPB units in the future as no existing tooling has been modified and are also available in this year’s range. 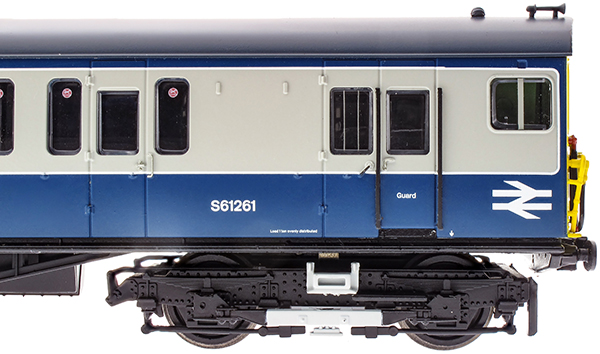 The Driving Motor Brake Standard Open utilises the same chassis and mechanism as the previous Southern EMUs within the Branchline range and houses the weighty motor bogie, which is largely concealed within the guard’s luggage area with a 21-pin decoder socket adjacent to the cast block around the motor. Provision is also made for a removable seating section to accommodate the housing for a speaker, which is provided within the accessory pack.

The Driving Trailer Composite vehicle has the standard and first-class seating areas divided by the central lavatory, which was accessible to both halves of the vehicle. As the units were non-gangway this was not accessible to the DMBSO passengers and has risen to the 2-HAP nomenclature as this stood for 2-car HAlf lavatory, electro-Pneumatic.
From 1974, some units on the South Eastern Division had the first-class area de-classified and were retitled 2-SAP (although still being Class 414 units). Some of these units became permanently coupled in later years becoming 4-CAP units. 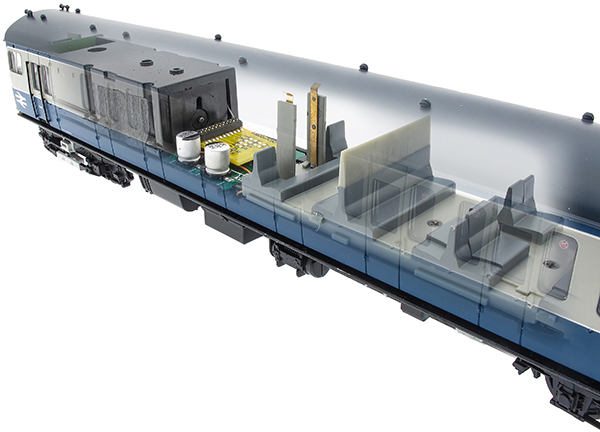 Our review sample sports blue and grey livery as worn by the mid-1980s when units had moved on to the South Western Division as 6063 comprising of DMBSO S61262 and DTCL S75381. It is superbly decorated as usual from Bachmann with a handwritten style of unit lettering on the end of the unit adjacent to the multiple working cables, which is a nice touch. The end of the DMBSO features an inverted black triangle denoting which end of the unit has the luggage compartment.

The model features nicely muted directional lighting for the headcode blinds, the DMBSO wearing the number 84 denoting a Charing Cross to Maidstone/Gravesend/Chatham service via Greenwich, whilst the DTCL has red blinds denoting the tail of the train. The passenger compartments are lit by warm-coloured LEDs taking me straight back to late night services back to lodgings in Kent as a student. The electrical connectivity between the units is achieved through the rigid couplings supplied – one long one for curves of second radius and one short one for curves of third radius and above.

As is typical of this weighty chassis and five-pole motor combination, the performance is excellent with whisper-quiet smooth motion straight from the box. There are no electrical connection issues as there are pick-ups to each wheelset. Another accurate and delightful third-rail EMU from the Bachmann stable!