Andy York examines these models of the rugged bogie tippler wagons associated with some of the heaviest freight trains in the UK.

These characterful wagons were built in three batches by British Steel subsidiary, Redpath Dorman Long, from 1972, for transporting iron ore to Consett, Llanwern, and Ravenscraig. The tough-looking tipplers stood out further with attractive liveries and rode on distinctive BSC ‘Axle Motion’ bogies, soon becoming a favourite of the enthusiast as they became synonymous with the heaviest trains on the British Rail network. The Port Talbot to Llanwern trains saw 27 British Steel PTA tippers triple-headed by Class 37s, before the introduction of pairs of the then-new Class 56 on 30-wagon trains. 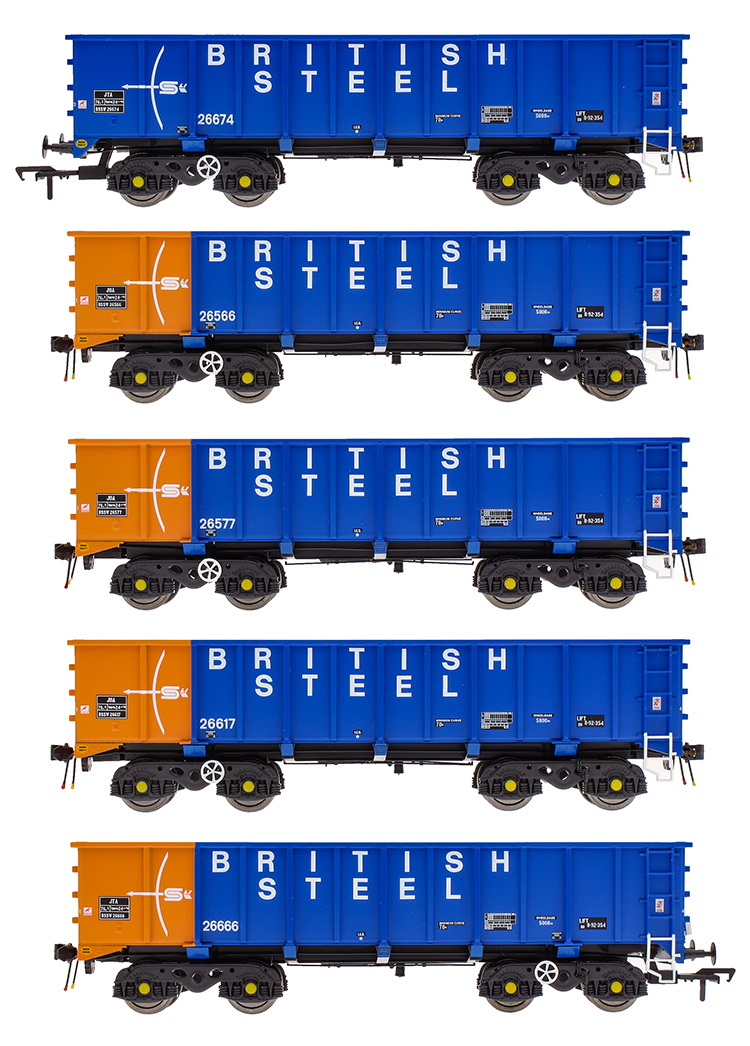 Following the closure of Consett in 1980, a batch of PTAs became temporarily redundant before being snapped up by Procor. These soon found work on Mendip stone trains, going both to Foster Yeoman and ARC. Their use was in block formations from quarries at Merehead, Whatley and Tytherington to depots in London and the home counties. Once again, the PTAs found fame as wagons in the heaviest regular freight trains in the UK, with 43 wagons being hauled by a pair of Class 56 locomotives from Merehead to Acton for Foster Yeoman. The wagons would be painted in distinctive house liveries of Yeoman grey and ARC mustard, and see service behind the then-new Class 59 – as well as other BR locomotives – much like their British Steel counterparts, which were enjoying electric traction haulage on the WCML with pairs of Class 86 and 87 locomotives. The PTAs continued to provide sterling service for British Steel across Britain as well as Yeoman, ARC and its successor, Mendip Rail, into the 2000s, when age began to catch up on them. All wagons were classified as PTA under TOPs when built; after 1990 this was changed to JTA for outer wagons and JUA for inner wagons. 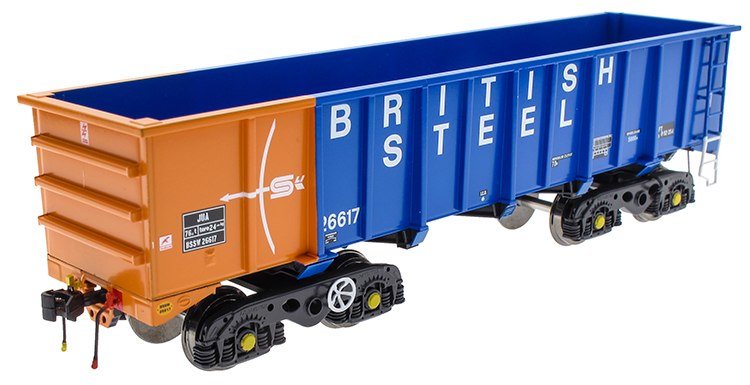 Wagon leasing company VTG took on rakes of JTA/JUAs in the mid-2000s and they were used on spoil trains as well as sand and sea-dredged aggregates until withdrawal. These long-lived and widely travelled wagons are the subject of the fifth 4mm:1ft scale wagon model from Accurascale. Like its previous wagon announcements, this pattern of PTA/JTA/JUA has never been available RTR in the scale. Although the wagon bodies may appear to be a simple box shape, there is a taper on the sides, which is evident when you look at the corners carefully and the depth of the strengthening sections on each side. 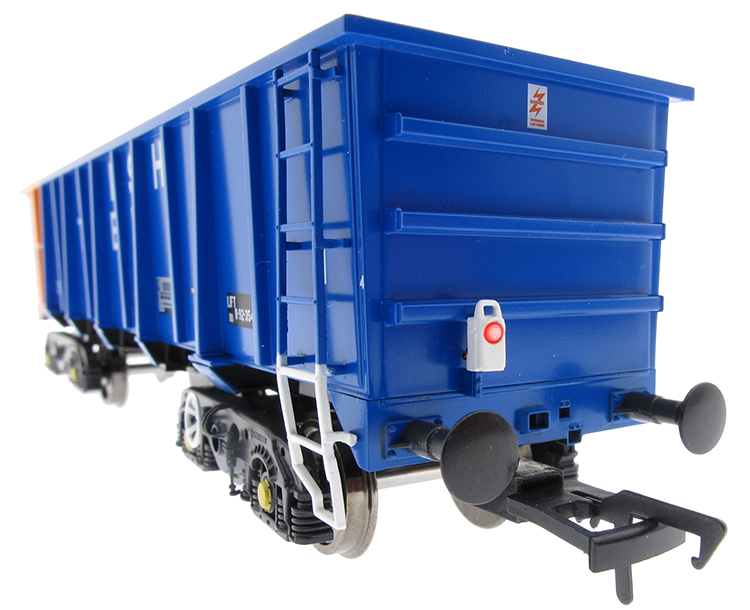 A pack of ‘outer’ wagons comes with two end wagons with NEM-pocketed tension-lock couplings, buffers and sprung knuckle couplings for the ‘inner’ end. The three inner wagons (and all five wagons if purchasing an ‘inner’ pack) have these knuckle couplings. I feel they offer a more accurate appearance, especially as their height is set to that of the prototype rather than common model coupling heights. 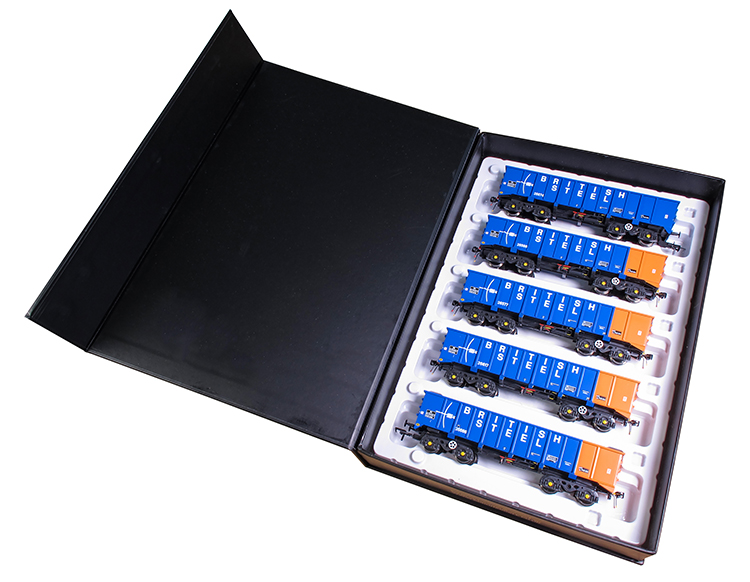 One end wagon in each ‘outer’ pack is fitted with a flashing tail lamp, powered by a CR2012 watch battery. The inner floor of the wagon is removed by pressing through a small hole above the wheels on the outer axles with a small screwdriver. This reveals the circuitry and wagon weight. The battery is simply slid between the contacts, and the floor fits back into place. The flashing lamp can then be turned on or off with a very small dip switch underneath the wagon located just behind the bufferbeam. 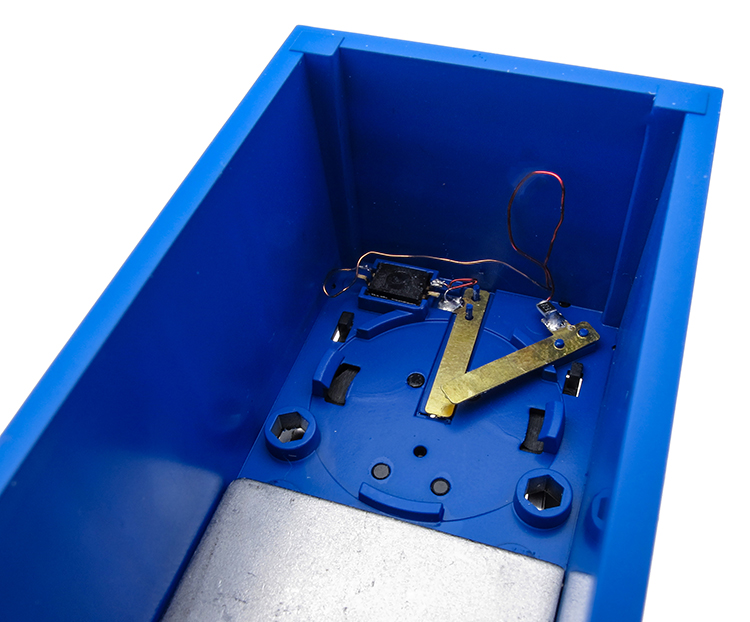 There is an attractive depth to the body colour of each of the wagons, with clear number and information panels. There is overspray around the blue rectangle of the Yeoman wagons – a by-product of painting the bodyside and structural uprights, which vary greatly in depth. To be frank, this wasn’t the tidiest on the real wagons, either.

On test, the wagons rolled well and were free of wobbles, the knuckle couplers performing well, especially when propelled over pointwork. As with all Accurascale stock they have been designed to accommodate scale EM/P4 wheelsets. A pack of outer and inner wagons makes an impressive 10 vehicle train, but it would be great to see full sets of 27 wagons working on layouts behind three Class 37s!