Now available in 2mm:1ft scale after its 4mm:1ft scale release, Howard Smith provides an overview of these two-axle wagons.

A distinctive two-axle wagon shape has reappeared with these new models available – already in limited quantities – from Revolution Trains. Previously manufactured by Accurascale in 4mm:1ft scale, the company has partnered with Revolution Trains to scale down the model for 2mm:1ft scale modellers.

Constructed by Metropolitan-Cammell to diagram 6/430 and design code PC 003A, the prototype wagons were used between 1961 and 1988, and were best known for their use on trains of Blue Circle cement from Cliffe in Kent to Uddingston, Glasgow. During their lives, they could be seen operating to other locations such as Aberdeen, Dewsbury, Dundee, Grangemouth, Sunderland and Widnes.

Models are being sold in packs of three, of which seven are available – four with Blue Circle, pre-TOPS branding and three packs with TOPS numbers and in plain silver livery. Wagon contained in each pack aren’t duplicates, either, each featuring an individual running number with prototypical detail variations. Numbers aren’t duplicated between packs either, so if modelling longer rakes, a few packs can be combined.

Kindly sent for review by the manufacturer was a sample of its wagons carrying the Blue Circle Bulk Cement roundel branding. The distinctive reinforced solebars are achieved by etched overlays and are neat, the smallest of lugs holding guiding these in-situ during assembly. Side discharge pipes, upper loading hatches, buffers and discharge shuts are clearly individually-fitted components – and strong, despite their size – but a more thorough examination reveals far more. To the underside, the discharge air reservoir and its pipe are visible, while the inner brake beams and their miniaturised wire retainers are present, too. The outer brake beams and retainers are omitted, presumably because of clearance issues with the articulation of the NEM coupling sockets. 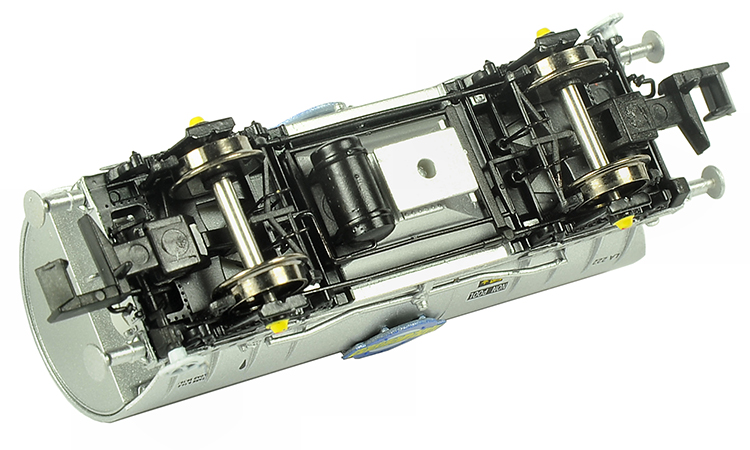 Livery application of paint, numbering and lettering is without fault, however, a common theme across all wagons received is the separately-applied tank-side branding, seemingly sloping to the left. Readjustment might be necessary.

On test, the wagons ran smoothly through Code 55 track, additional internal weight contributing to their ‘grounded’ performance, though unclipping the bodyshell from the chassis should allow further weight to be added, if deemed necessary. All told, a fine new range addition to the N gauge offerings by this brand. Recommended.