Some 51 D Class 4-4-0 locomotives were built between February 1901 and March 1907 during the Wainwright period by the South Eastern & Chatham Railway. The design work for these locomotives was carried out at Ashford Works. From delivery, they were used on the prime express trains to the Kent Coast and Hastings, including those carrying boat train traffic for the Continent via Dover. As a result, D Class locomotives were painted in the green passenger livery bordered with black and green bands and red/yellow lining. 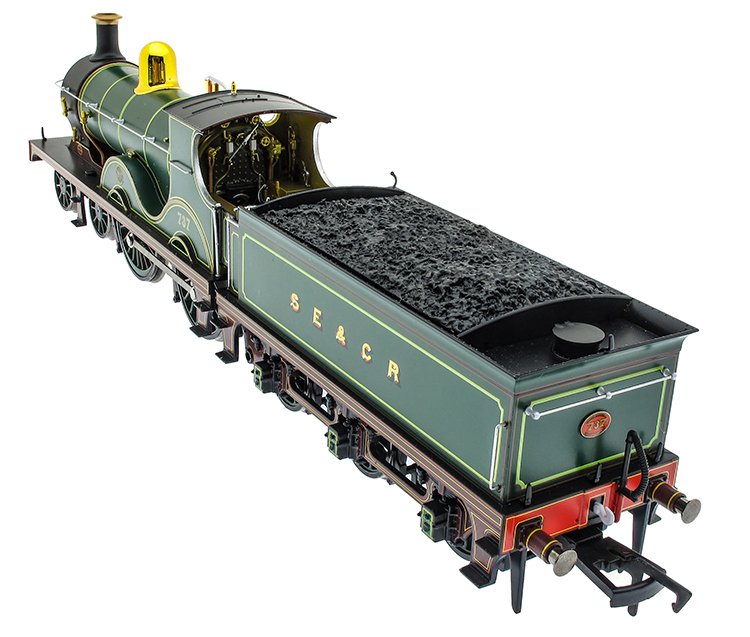 Between April 1921 and October 1927, 21 of the Class were rebuilt as D1 Class 4-4-0s, leaving 30 D Class locomotives in operation. During the first years of the Southern Railway, the locomotives continued to appear on front-line express duties. As larger locomotives appeared, the D Class locomotives began to spread to South Central services, formerly operated by the London, Brighton & South Coast Railway.

28 members of the D Class entered British Railways stock. No. 31737 was withdrawn from traffic at Guildford MPD in November 1956. It arrived at Clapham Museum on June 27, 1960, and then moved to the then-new National Railway Museum at York for its opening in 1975, becoming part of the National Collection.

We are reviewing the preserved livery version, which is exclusively available from Locomotion Models, but there is a range of liveries throughout the life of the locomotive as shown in the datafile that are only available from Dapol directly and Rails of Sheffield. I understand that sales have been very high and there are only a few models left in some liveries.

Dapol has done quite a magnificent job with this model for the partnership and the quality stands out as soon as you unbox it. There is an excellent instruction leaflet with clear illustrations covering all aspects of ownership and a supplementary sheet, which covers an important aspect of the model. As supplied, the model is fitted with traction tyres on the leading driving axle but a spare wheelset without traction tyres is included, with a wheel-nut removal tool and clear instructions for those who would prefer to not use them. The inclusion of tyres is to ensure that the model can manage the types of loads that modellers habitually put behind locomotives and it competently delivers in this regard, handling 12 Mk. 1 coaches on the level. It takes 10-15 minutes to change the wheelset, which reduces performance to five or six coaches on test around curves, whereas 10 coaches were handled comfortably with traction tyres. On balance, considering the loads that such a locomotive would be tasked with, my preference would be to replace the wheelset.

The model is very smooth and quiet when running, but slow speed control is better under DCC. Dapol has provided a smokebox door removal tool to gain access to the 18-pin socket on the circuit board after the PCB is pulled forward with the tool so there is no need for body removal. The company recommends the Dapol Imperium 18-pin decoder as the most suitable. I have also tested one of Rails' sound versions, which includes the sound decoder with files and two speakers, a sugar cube in the smokebox and a larger, more dominant one, inside the tender. I must say, I found the performance exceptional. Another feature that performs better under DCC is the red and yellow flickering firebox LED. With analogue control, the LED is constantly on and shows through the aperture in the rear splashers. At least with the DCC sound version, it can be turned on or off or used in conjunction with the coal-shovelling sound. 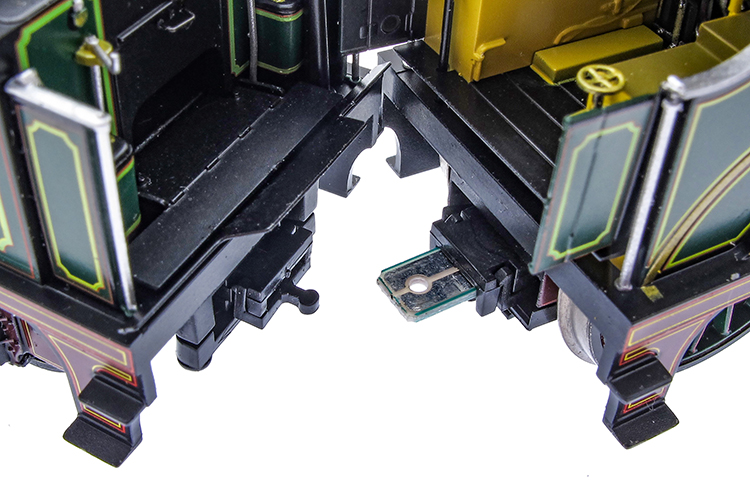 When first handling the model, the impression is of well-balanced weight with the centre of gravity in the centre of the leading driving wheels – critical to the performance of any 4-4-0. The locomotive to tender coupling is a standout feature of this model for its simplicity, practicality and durability. A short tab extends from beneath the footplate with two contacts on the both top and bottom of the tab for current collection and connection to the speaker. The tab plugs into a socket beneath the fall-plate on the tender and the tab and socket is supported with a plastic peg and socket beneath the connection. This is something I would love to see more widely adopted as a standard for locomotive and tender connections. Another design element that is noteworthy and as good as we have seen on any RTR model is the representation of the motion on this inside-cylindered class where it is possible to see straight through. Having had the smokebox door open for decoder access, the way the door fits back in with near-flush precision is exceptional. Even viewing from low angles, there is a commendable lack of daylight between the front bogie and the frames and there is no restriction in freedom of movement.

The excellent instruction booklet makes reference to a die-cast boiler. We saw the model in this form at launch, but a late revision to a plastic boiler was made. The model doesn't suffer as a consequence as it is well-weighted and balanced. Dapol produces a good chassis and axle interface, with brass bearings sitting inside. Every aspect that I’ve looked at inside the workings indicates it’s likely to be a model that gives years of good running.

The finish and decoration of the later liveries including SE&CR wartime grey, Southern olive green (with the exception of a number-style error), Southern and British Railways' black are all very good. The aspects which affect the early-liveried models more than others is the brass dome, safety valves and whistle. I'm not really a fan of the finish, being more gold than brass in tone and somewhat glossy, whereas the copper rim to the chimney is nicely subdued and not at all plasticky. There are some fine decoration elements, particularly on the lining but some elements are transfers, and I've seen some evidence of the transfer breaking up on the running plate lining as I will habitually pick a model like this up by the running plate adjacent to the leading drivers. The company crest on the front splasher isn’t as distinct as it could be but it's only evident under close magnification. A cautionary note is the whistle on the cab roof – it's very fragile so if you are turning the model over for maintenance, please ensure it's well protected. I didn’t.

The accessory pack includes painted cab doors, which can be fitted if your curves permit, guard irons and vacuum pipes for later models.

Overall, the model is a credit to everyone involved in the partnership – I know there was a collective determination to make it as good as possible.