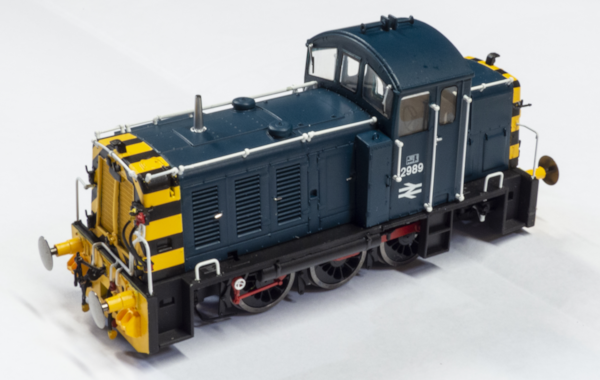 The release of its second batch of models sees a review sample arrive in the office - time for a review?

Heljan released models of its Class 07 almost a year ago in nine liveries. A year later, the manufacturer has released a second batch of the models in nine liveries, some of which sold out in previous releases. The following are now available to purchase from your local Heljan stockist:

The Class 07s have a distinctive shape, a centrally-located cab with a wide engine bay fore, and fuel compartment, aft. The model is perfectly balanced above the centre axle, its die-cast chassis contributing to its 198g weight. In conjunction with its six-coupled wheels and powerful five-pole motor, it's a capable locomotive, despite its size.

The locomotives received glowing praise after they were launched, though a few received comment on our forum RMweb for their lubricating cranks which were fouling the air tanks. Adjusting these and the softly-sprung phosphor-bronze pickups to make better contact with the wheels was occasionally necessary.

Where this model excels is in the detail. Handrails around the bodywork are in plentiful supply, from the front, cab and rear steps, to the length of the bodywork along the treadplate. These are solid affairs, made from wire and hence are strong, don't flex with handling and remain free from distortion. More importantly, they have no flash residue from moulding and the high-contrast white applied to them on this model against the sombre BR blue bodywork makes the otherwise plain livery appear far more ornate.

The front and rear of the model has excellent detail - despite its 'box-like' nature, there are plenty of highlights to keep the eye entertained. Air-pipes are and hoses are clearly defined, being separately-applied, the raised air pipe connectors for use with EMUs providing an excuse for a pipe run that snakes its way along the bufferbeam and up to the raised connectors. Draw and buffing gear is superbly-represented, the suftly-sprung nature of the buffers makes them work when in operation and the screw-link coupling can be used if desired, though doesn't 'screw' as with its O gauge models. The couplings are articulated where they should be, too. The grille has an excellent degree of finesse, being an etched part.

Dimensionally, I can't find fault with the model. The distinctly clunky-nature of the coupling rods is well-captured, and these are articulated, as per the prototype, providing articulation for the centre driver. Even the handles for the side doors around the body have individually-fitted handles, correctly-painted blue to the rear and left unpainted to the front. Panel lines, hinges, recesses and louvres too are excellent. It truly is a work of art and the team at Heljan has spent a great deal of time researching the model.

Many modellers might dismiss this small Class of just 14 locomotives as being too specific for the area around Southampton Docks, but think again. Though all were withdrawn from BR by 1977, those that weren't scrapped found their way into industry, from ICI at Middlesborough, to British Industrial Sand at Oakamoor, DOW Chemical Company at King's Lynn, Powell Duffryn at Kidwelly or Staveley Limeworks at Buxton amongst others. This led to a few private-owner liveries, represented in this latest batch from Heljan by D2991 in BR Eastleigh Works light green, 07006 in Powell Duffryn blue and white or 07005 Langbaurgh in ICI Wilton grey and orange.

BR green or BR pre/post TOPS blue liveries aside for a great model of Southampton docks, there are other industrial (and heritage line) uses for this Class which could be used single-handedly on a new layout. For creative inspiration, an internet search will uncover some real treasures. What better way to get started with an industrial layout?