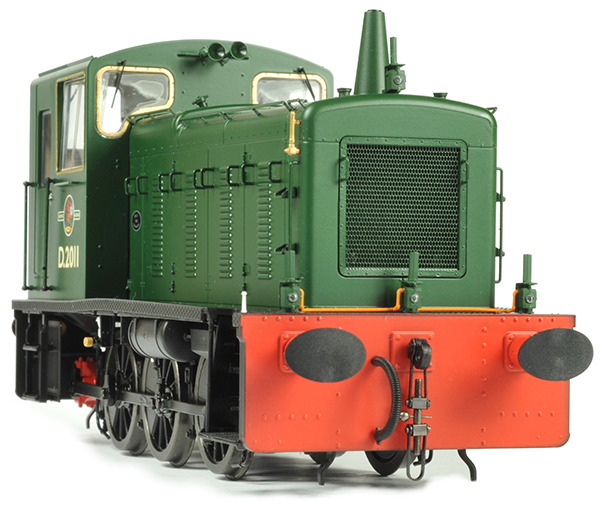 For the O gauge modeller, kits for this locomotive have been available for some time, and a ready-made – though unpainted – brass model was issued a number of years ago from Bachmann. Modellers have had access to this prototype in model form in limited numbers, though surely Heljan has made it more accessible with the release of this new model in RTR form. At 875g, the model has a useful tractive effort. We received a sample of D2011 in BR green with late crest and conical chimney (2051). The locomotive is one of only two from this batch to have the chimney, the other eight have the wider ‘flowerpot’ chimney. For such a locomotive to be issued with a choice of 10 liveries, from BR green to BR blue, industrial blue/yellow and industrial yellow is great for modellers.

All visible detail is injection-moulded plastic. Cab windows are flush – bar one on our sample which wasn’t glued properly and the brass-painted frames of these are incredibly fine and well-reproduced. Joining the classic panel lines, louvres and rivet detail around the model are the grab handles and handrails. Fitting these in the factory must be a repetitive task given their number, though all are uniform, sticking out to the correct amount. The front grille mesh looks the part, its finesse more obvious if weathered a lighter shade of dirt than the dark of the shadow behind it. 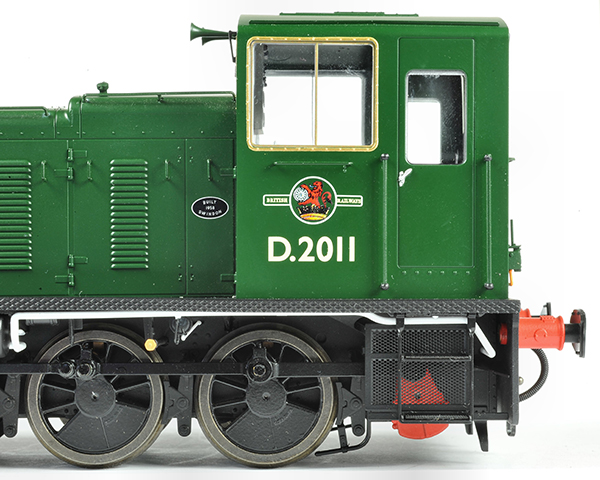 The final drive protection screen is well-executed and of a different pattern than the front grille. Often mangled after many years’ service, these screens would act as protection should a shunter slip when riding the steel steps with the locomotive in motion.

Class modifications existed, though most occurred after the locomotives were sold into industry in the late-1960s and 1970s following their being surplus to requirements. Many remaining class members which remained in active use by BR were upgraded to dual air/vacuum brakes, these being easily distinguished by the large vertical air tank by the cab on the right-hand running plate and additional air hoses to their bufferbeams. At least 17 were so-equipped.

Underframe detail is good – sanding gear, chunky scale coupling rods and jackshaft drive weights to name but a few of the areas which caught my attention.

As expected on a Heljan product, cab interior detail doesn’t disappoint, with linked power regulators, capstan-style handbrake wheel, gauge cluster, brake controls and gear selectors clearly on show. An interior cab light is included, courtesy of an SMD LED on a circuit board, though I question the positioning of the cables to this which travel the length of the cab floor in the centre. Perhaps painting these to better blend with the cab floor and fitting a crew will help disguise them. Modellers can access the cab interior to further detail or perform upgrades via the two screws which locate and secure it to the underside.

If the chassis had been made from a one-piece solid die-cast piece it might have alleviated the flexible running plate problem, unless perhaps it is for manufacturing purposes and Heljan intends to produce a Class 04, soon? Time will tell, though for now, these shunters bar a few negligible quirks are excellent for all your shunting needs. More, please!