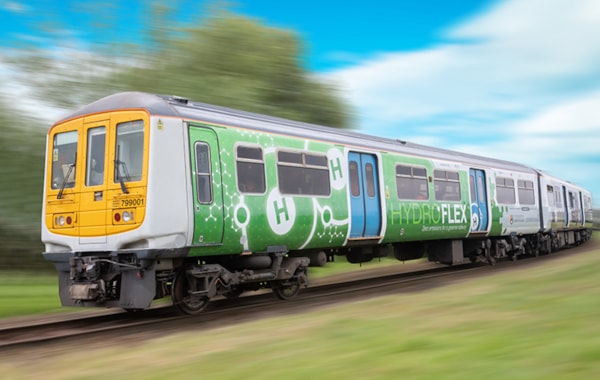 A project to develop the UK's first hydrogen-powered train (HydroFLEX) has been named 'Business Partnership of the Year' in the 2020 Guardian University Awards.

A partnership between Birmingham Centre for Railway Research and Education (BCRRE) at the University of Birmingham and Porterbrook to develop the world's first retro-fitted hydrogen train has been recognised by The Guardian as "an outstanding university partnership with a business or an industry – regional, national or international – where knowledge is applied, and resources shared for the benefit of the broader economy".

Beginning life as a student-led project into a narrow-gauge hydrogen-powered locomotive to contribute to UK decarbonisation goals, the HydroFLEX project has developed, with BCRRE and Porterbrook establishing a major collaborative research and innovation project to develop the UK’s first operating mainline hydrogen train. An agreement was formalised in Autumn 2018, in which the University of Birmingham and Porterbrook agreed to invest, collaboratively, and convert a Thameslink electric train to hydrogen power in nine months.

The working demo train made its public debut in June 2019 at Rail Live, when more than 500 people journeyed on HydroFLEX, including the Chairman and Chief Executive of Network Rail, the Secretary of State for Transport, the Shadow Transport Secretary and international media. With the working demonstrator train, the University secured £350,000 funding from Innovate UK and the Department for Transport's First of a Kind competition, for mainline testing, which took place in September 2020.

Porterbrook has also announced plans to put HydroFLEX into production in response to customer demand. Alex Burrows, Director of BCRRE, said, "The whole project team is absolutely thrilled to have won this award. This is fantastic recognition of the partnership we developed and the approach we took of establishing a diverse team from the University and Porterbrook. The HydroFLEX project has been a real career highlight for everyone involved and this award is hugely pleasing in recognising the efforts of everyone on the team.”

Stuart Hillmansen, Reader in Railway Tractions Systems and HydroFLEX lead at the University of Birmingham, said, “We are delighted that the pioneering research work on Hydrogen Fuel Cell Trains at BCRRE has been translated into a real world application which can deliver real benefits in terms of decarbonisation and air quality. We are honoured to win this award. It has been an amazing team effort, with all our partners and we are looking forward to the next stage where we roll out this hydrogen fuel cell technology to the wider rail industry and play our part in the industry’s decarbonisation plan.”

Mary Grant, CEO of Porterbrook, added, "We are delighted that our University of Birmingham partners have won the Guardian’s Business Collaboration Award for our pioneering hydrogen train, HydroFLEX. The work we have done together has been ground-breaking in terms of zero-emissions transport. At Porterbrook we take our responsibility for de-carbonising the railways very seriously and this award only bolsters our motivation to keep innovating.”

Work on the next stage of HydroFLEX is advanced at the University, with a hydrogen and battery power module in development that can be fitted underneath the production version of the train to create increased capacity for passengers in the train's saloon area. The University of Birmingham is at the forefront of innovation in the hydrogen supply chain in the UK – an area forecast to grow to worth of £1.6m per day.

OK if the hydrogen is generated on the train or made entirely by electrolysis; otherwise there will be a net rise in carbon dioxide. Make sure the batteries do not contain any non bio friendly materials and are not made using fossil fuel generated power.