Recent arrivals from the brand synonymous for 'model railway' – and why we think they'll remain collectable in the future.

Ask any model railway collector how their journey began, and you'll likely receive a multitude of different reasons. From collecting memorabilia around a brand name, only to find it on a locomotive or wagon, or discovering the gateway to model railways from die-cast model vehicles in similar fashion. Of course, there's often the reason of 'I had one of these when I was younger'.

Hornby has, arguably, long been the favoured brand of the model railway collector. While its latest products hold great appeal to more serious railway modellers, its back catalogue of products carries an aura of nostalgia with enthusiasts.

Manufacturers are always looking to attract customers from new client bases, and the following latest releases from Hornby are great examples. Here's why we think they hold appeal now, and into the future.

The manufacturer's 'Lowmac' wagon has been in its catalogue longer than I've been on the planet, but you can teach an old wagon new tricks it seems. Here it carries a miniature bottle of coke 'from a well-known brand' – well, we can say it here because it's all licenced. Coca Cola is big, and it's a brand name that's recognised world-wide. To give you an idea of its marketing budget, this has averaged around $4B a year since 2014 (ignoring 2020).

Placing that name on a 'Lowmac' wagon should appeal to collectors of both brands, and railway modellers who are tempted by something more fun. Other Coca-Cola-licensed products are in the Hornby range, including its Coca-Cola Christmas Train Set (R1233M). This wagon should really be seen as an 'add-on' to that set, then.

Left in a display cabinet to accrue dust seems a shame. Our advice? Weasel it into a friend's wagon rake, and see how long it takes for them to notice.

The collectable theme continues this year on this box van with vintage Hornby Railways livery. It's an ongoing theme from the manufacturer's 2020 centenary range, where retro liveries rose to the fore.

Hornby wagons have their own collectable niche, too. The manufacturer has released a 'year wagon', every year, since 1992, a tradition which started with the release of a five-plank wagon. Its Roadshow wagons started in 1999. Perhaps 2022 was another anniversary of sorts, then?

Nostalgia plays heavily in the collector's market, but then, so does the condition of models. Many models are purchased by collectors, because they're in mint condition. And, cruel as it seems, you need many models of a production series to become broken, damaged beyond repair or destroyed, for the few that remain to gain 'highly-collectable' status. 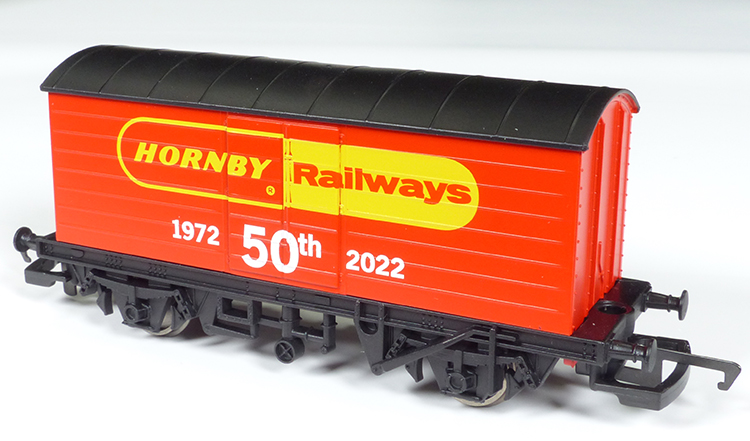 2022 only happens once, and these have been produced in a limited run – now you'll just need to store it away safely for another 50 years!

Speaking of 'gateways' to model collecting, how about cinema? The 1970 film, The Railway Children has become something of a cult classic. On July 1, 2022, The Railway Children Return will hit cinema screens, bringing with it a new fanbase – in addition to appealing to fans of the original film. Hornby's LMS 4F release seeks to tap straight into that. Aside from the collectability of this model because of it representing the locomotive from the feature, it remains a detailed model from great tooling, and should stand scrutiny from even the most discerning of modellers for years to come.

The film critics haven't been unleashed on The Railway Children Return, yet, but from the scenes we've seen, we feel it won't disappoint.

For current pricing and availability of the above models, see your Hornby stockist, or visit the Hornby website.

I do like to collect the Hornby logo stock and I have the Christmas, Roadshow, Annual and Club issues. What does annoy me is the awful tat like this Coke Lowmac. The thing is poorly printed and has bad wheelsets and couplings from an era that should be surpassed by now in detail and quality. Plus, the price of this is outrageous too for a 25+ tooling. Come on Hornby get the finger out on decent models with upgraded tooling and at realistic prices.

Sorry that I have to disagree with the previous comments. The review related to the products Hornby are offering as 'Novelty' or 'collectable' items. They are not to my taste, but they do link in to other Hornby offerings, such as the'Coca-Cola' Christmas set, and the update on the 'Railway Children' set and film. Surely Hornby are entitled to make such offerings and 'World of Railways' to review them as suits their niche?

Dreadful reviews. They are not even suitable for kids. and the prices? Are you all in the pay of Hornby?

Sorry to disagree, but in my opinion the Hornby (R60170) 'Lowmac' with Coca-Cola bottle is an expensive piece of plastic nonsense - a rip-off price for an out dated piece of poorly made rolling stock. Sadly, thousands will be made. They will never become a treasured collectors item.