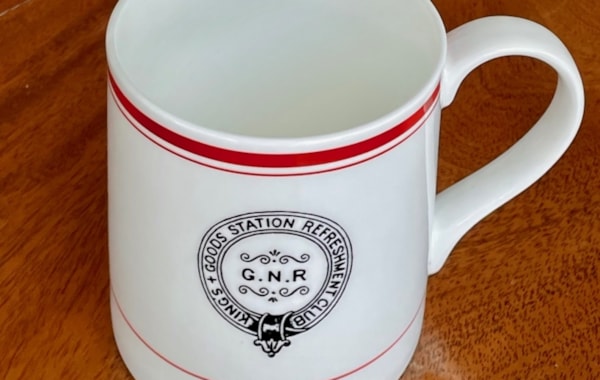 From its very beginning, King’s Cross goods yard had a staff food facility – this developed into the ‘Goods Station Refreshment Club’ sometime between 1873 – 1884, continuing to grow in size into the last century.

MRC members have been building a model of this building on the 2mm scale layout, Copenhagen Fields.  The prototype building was demolished by 1970, but during recent archaeological excavations, a significant number of remains of Refreshment Club mugs were found, stylishly decorated with red banding and a transfer-printed circular GNR logo.

The Club has had facsimile fine china mugs made with the characteristic banding and motif. They are a good size with a generous handle and ideal for dunking biscuits!

Priced at £9.50 each, details can be found on the club website. All proceeds go towards supporting The Model Railway Club in London.