The battery-hybrid Class 18 Bo-Bo shunter constructed by Clayton for Beacon Rail Leasing is to be offered in OO gauge by Revolution Trains.

Revolution Trains has agreed an exclusive licence to produce Clayton's Class 18 locomotives in Beacon livery, with permission to produce the five different Tata Steel versions that have been in service since 2019. The manufacturer has partnered with Rails of Sheffield to retail the models, expected to ship during Q4 2022.

The Revolution model promises high levels of detailing and operationally accurate working light functions with locomotive-specific detail variations where possible. DC and DCC Sound options will be available, and first samples are expected in Spring next year. Versions will be offered in Beacon blue, Tata pale blue and Sellafield blue with yellow handrails. Other operator liveries may be offered in due course. 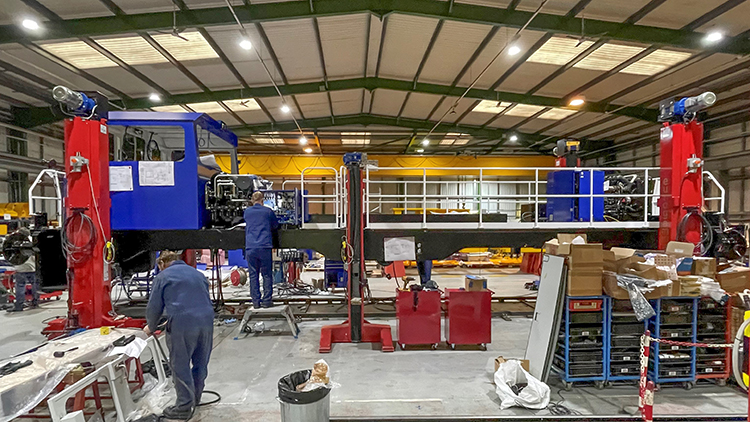 Beacon Rail has ordered 15 of the locomotives as a modern, low-emission alternative to ageing diesel shunters still in use around the country, such as the Class 08 fleet. Designated CBD90 by Clayton (for Clayton Battery Diesel 90T), each locomotive has two large battery packs that can either be charged via a three-phase shore supply or topped up on demand by the on-board diesel engine. The Class 18/CBD90 can move more than 2000T and offers operators significant savings on fuel costs and emissions along with a safer, more comfortable driver environment. The locomotives are being assembled at Clayton’s factory in Burton-on-Trent and are the largest locomotives built in the UK for nearly a quarter of a century.

Revolution’s Ben Ando said, “Beacon first mentioned this innovative new locomotive to us during the early development stages of our N gauge models of its Mk. 5a Trans Pennine stock, and we are very excited to be working with them and Clayton to create the models.”

Revolution’s Mike Hale added, “Even the newest Class 08 shunter is nearly 60 years old; this is a design whose time has come. And the very distinctive appearance and sound will make for an appealing and eye-catching model.”

Beacon’s Viren Walia said, “These locomotives have been designed for operation in network yards and depots, as well as at private sites such as quarries, cement works and fuel terminals, all subject to the relevant approvals. When we saw the test samples of the Mk. 5a stock we were impressed, and we are happy to give Revolution the exclusive licence to produce our Class 18s.”

Clayton’s Managing Director Clive Hannaford said, “Since unveiling our new hybrid locomotive we have had nearly a thousand enquiries from around the world. Shunting is a major part of railway operations, and a high efficiency, low carbon option is clearly very attractive to operators.”

Further details on the models can be found on the Revolution Trains and Rails of Sheffield websites.