The manufacturer receives decorated samples of its forthcoming IWA bogie wagons for OO and N, while first EPs are shown of its PFA two-axle wagons for 'N', and its 'Pendolino' is to be re-issued.

Revolution Trains has received decorated samples of its upcoming 00/4mm IWA wagons in both van and timber flat format.  The models are being sold in twin-packs, and modellers are being encouraged to take advantage of the low pre-order price.

200 of these vehicles – with TOPS code IWA and UIC designation Sfins2 – were built in the 1980s by Waggon Union of Germany and they’ve run in Norsk Hydro and Cargowaggon liveries, as well unbranded. In 2006, around 40 were converted to timber carriers, with the removal of the roofs and sliding equipment, and replacement with side stakes. They kept the IWA TOPS code but under UIC designation became Rfnoos.

The Revolution model features NEM couplers in kinematic sockets and separately fitted end wheel and underframe brake details and wire handrails. The timber carriers are supplied as originally built with eight large side stakes, but smaller stakes, as subsequently fitted to the prototypes, will be supplied for customers to fit.

The manufacturer is offering its Sfins2 vans in Norsk Hydro, Cargowaggon and unbranded liveries, with a choice of running numbers. Its IWA Rfnoos timber carriers are being proposed in a choice of four packs with 'Touax' branding.

Samples of the same wagons in N gauge are expected soon, and the models are available to order in 'OO' and 'N'. 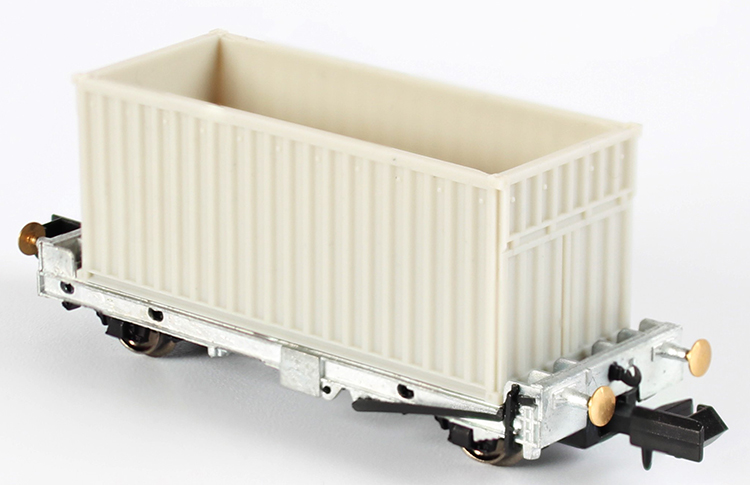 The Revolution model comprises a die-cast metal deck, for weight, with additional plastic detail parts and will incorporate NEM coupler pockets. Decorated samples are expected shortly, with the order book likely to close early in the New Year.

Models are being offered in triple packs with different numbers. Four packs are to be made available with Cawoods yellow containers, one pack with British Fuels red containers, two packs with DRS half height low level waste containers and one pack unloaded. In total, 24 different PFA numbers are being made available. Due to wheel clearance, the DRS wagons are fitted with ISO-compatible diamond shaped frames to lift the containers clear of the wheel flanges. This is replicated on the Revolution Trains with a removable photo-etch.

The PFA wagons were built in the mid-1980s to transport containerised coal from collieries across Britain to ports on the northwest coast for shipment to the Irish Republic. Originally the coal was carried in bright yellow Cawoods-branded containers, later some were acquired by British Fuels Ltd and repainted red. Revolution is offering PFAs in packs with both colour schemes, and in the 1990s and 2000s trains could be seen with a mix of yellow and red boxes. In the 2000s, Direct Rail Services purchased a number of PFAs to use for low-level nuclear waste and to act as barrier wagons, and they remain in use today.

New batch of 'Pendolinos' for 'N'

Revolution Trains, with Rapido Trains of Canada has opened the order book for a second run of its Class 390 Pendolino in N gauge. Available to order now is the 11-car train in the latest Avanti livery, along with versions in original Virgin colours and Virgin Flowing Silk scheme. 390045 in Virgin Pride flowing silk is also on offer, and for each model sold a donation will be made to LGBT support charities. Models are expected to go into production early in the New Year, with delivery in Summer 2021. All models are DC (DCC-ready) with on-board speakers factory-fitted to make sound conversion simple. Specifications are unchanged.