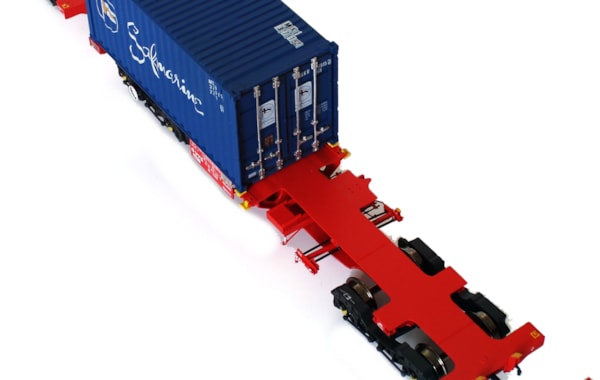 Revolution Trains has received decorated samples of all three versions of its forthcoming FWA ‘Ecofret’ container flats – in DB Red, GBRf blue and VTG green as operated by Freightliner.

More than 200 FWA wagons are now in use on intermodal services across the network, with more on order.  Freightliner operate theirs in twin sets comprising two outers, while DB and GBRf operate triple sets with two outers and an inner.

Unlike traditional 60’ flats, the Ecofret decks are each 40’ long; so in a market dominated by 40’ containers there is much less wasted space per train.  In addition, they reduce fuel use because the empty 20’ gaps often seen on longer wagons can create turbulence and increase drag.

The inner units feature rotating spigots on the centre, allowing them to carry either one 40’ container or two 20’ containers; this feature has been replicated on the Revolution Trains model.

The spigots on the outer corners of the wagons are fixed, like the prototype, and designed to suit the 40’ and 20’ dry box, reefer and tank containers available from C-Rail, though other containers should fit as the prototypes are a standard size.

The high levels of detailing include separate plastic and wire parts, plus intricate printing including the wheel profile and maker’s markings on the top of the bogie frames themselves – we think this is the first time this has been depicted in 00.

The models have now been approved and production is expected to begin shortly.  The models can be pre-ordered from Revolution at £100 for the twins, or £135 for the triple sets.