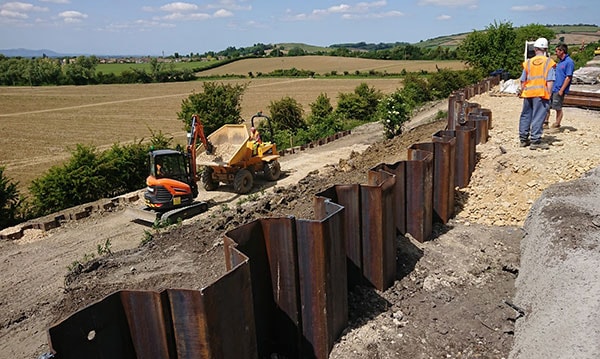 The Gloucestershire Warwickshire Railway Trust (GWRT) has passed its £250,000 appeal target to help the railway pay huge bills to repair an embankment landslip.

Thanks to generous donations, work at the popular Cotswold tourist destination has almost been completed and it’s future secured.

The Trust, which launched its Appeal in mid-March, is the charitable body that supports the 14-mile Cheltenham to Broadway Gloucestershire Warwickshire Steam Railway, which last year carried over 125,000 passengers. As of May 31, around £255,000 had been donated.

Glyn Cornish, GWRT Chairman said: “£250,000 was the expected cash shortfall the railway would face in paying for the embankment repairs so we set our sights high, hoping to raise a substantial part of that sum.

To have reached the full amount in just ten weeks and at a time when so many people are facing their own difficulties; and when there are so many appeals for help, is just astonishing.”

Now that this ambitious target has been met, the appeal has been closed.  However, if supporters still wish to contribute to the future work of the Trust, they can do so, and it will go into the Trust’s funds to support other projects.

The landslip has been repaired by specialist contractors, using both soil nailing and sheet piling techniques to permanently secure the embankment, which is between Bishops Cleeve and Gotherington. It is built over ancient ridge-and-furrow farmland which has proved unstable and exacerbated by a long dry summer followed by a very wet winter, the embankment started to become unstable.

“I know that all of the volunteers on our railway are deeply grateful for every penny contributed.  More than 1,300 people have made contributions and from the bottom of my heart, I want to thank everyone who has helped meet our target,” Glyn Cornish added.

Meanwhile, the railway has announced that it will remain closed at least until the end of August because of the Coronavirus situation and has cancelled all remaining events on the line. For updates, visit www.gwsr.com