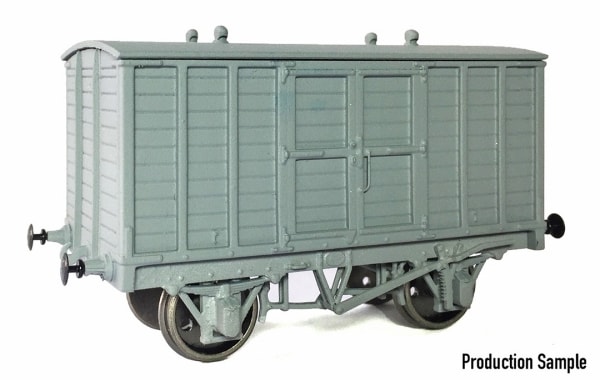 Rails of Sheffield in partnership with Dapol are pleased to announce that they are producing an OO gauge model of the SE&CR 16’ Covered Goods Wagon. Following on from the success of the late condition Diagram 1424 box van.

In 1904 the South Eastern & Chatham Railway introduced covered wagons to an increased length of 16 feet, though in appearance they resembled earlier South Eastern Railway designs. 110 wagons to this design were built up to 1908. Most were fitted with Hill's brake gear, which differed from the RCH or "freighter brakes" fitted to the wagons much later in their lives. The Hill's gear, featured in the new model, is of distinctive and asymmetrical appearance; brakes were fitted to one side of the wagon only, with levers to apply them from either side.

The new models will be released in three liveries: SE&CR light grey, as-built; the darker late SE&CR grey livery, introduced circa 1917, and SR brown livery, as applied between 1923 and 1936.

Just two of the wagons were fitted, in 1909, with experimental pressed steel doors. These doors were the product of The Leeds Forge Company, and had been supplied for wagons built for export. The General Manager of the Leeds firm, Francis L. Lane, persuaded Wainwright to try them. It is not known how long these doors remained fitted, so this variant is offered only in early SE&CR livery.

These models have been researched, designed and produced solely in the UK.

Initially, three liveries will be produced, with two running numbers in each livery.

The following models are now available for pre-order;

Production is in the final stages with these models expected in stock in soon. More information and updates on the progress of the project will appear on Rails of Sheffield website. Due to the small production run these models are expected to sell out quickly and pre-ordering is highly recommended to avoid disappointment.