5 new 3D printing developments we like the look of. 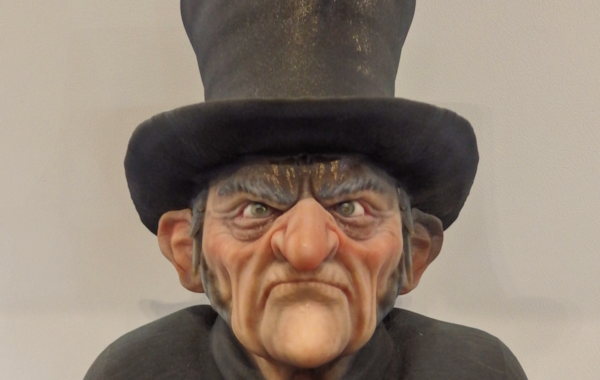 We dispatched Phil to the TCT 3D printing show to check out some new technology.

We've seen colour printing for a while, but the finish has been that of sandstone with a very gritty surface, so not much use for modelmakers. Stratasys PolyJet printers can now print in a massive range of Pantone colours with a smooth finish.

Apparently, The technology works just like traditional inkjet printing, but instead of jetting ink onto paper, a print head squirts liquid photopolymers onto a build tray where each droplet cures under ultraviolet (UV) light.

All these sounds, and looks a bit like magic. The results are incredible though and resulted in one of the most disappointing displays at the show - a plate full of lifelike 3D printed cakes. Zero calories, but somewhat hard on the teeth!  A bowl of fruit made the same way enjoyed realist textures, apples were smooth and bananas slightly rough. They feel harder than real fruit, slightly cold and very hard, but at least they won't go rotten.

The downside of this is the cost. A printer comes in at £225,000 so a bit out of my price range. The ability to work with Pantones might make a bureau service attractive to anyone producing engineering prototypes (EPs) for models, or high-end display pieces. Just don't be in a rush, a banana takes around 12 hours to print. 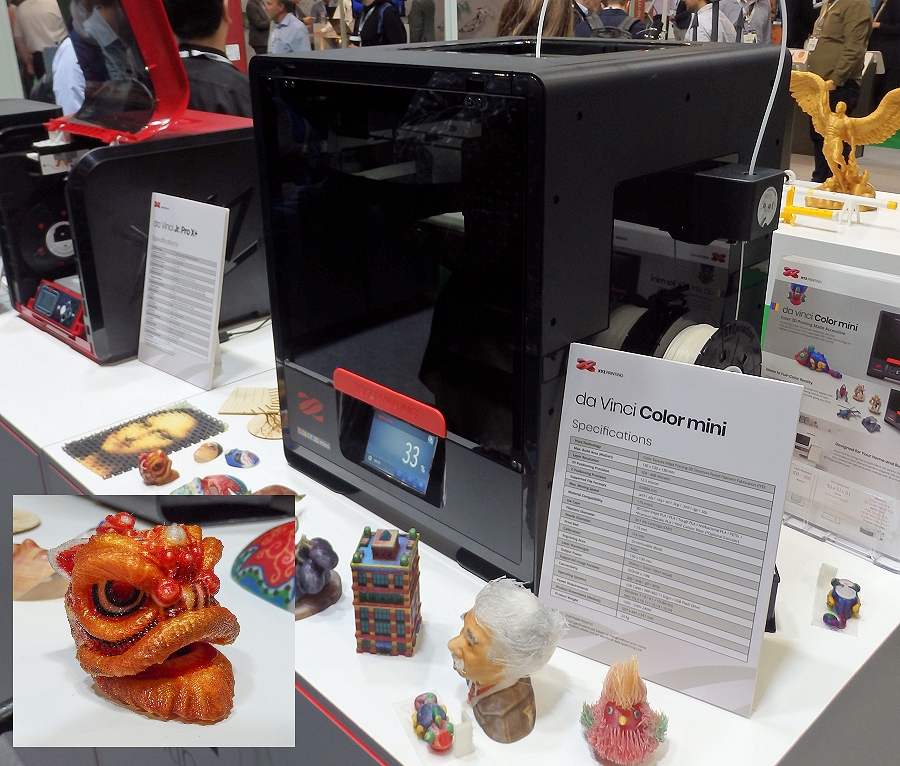 Obviously they aren't the same standard as those seen above, but it's an interesting application and the first time I've seen this on sale. Something worth watching for the future perhaps, after all, painting a model is still a skill that many of us need to develop. Simply producing a model isn't enough, we need to decorate it if it's to fit in on a layout. Price is around £1600. 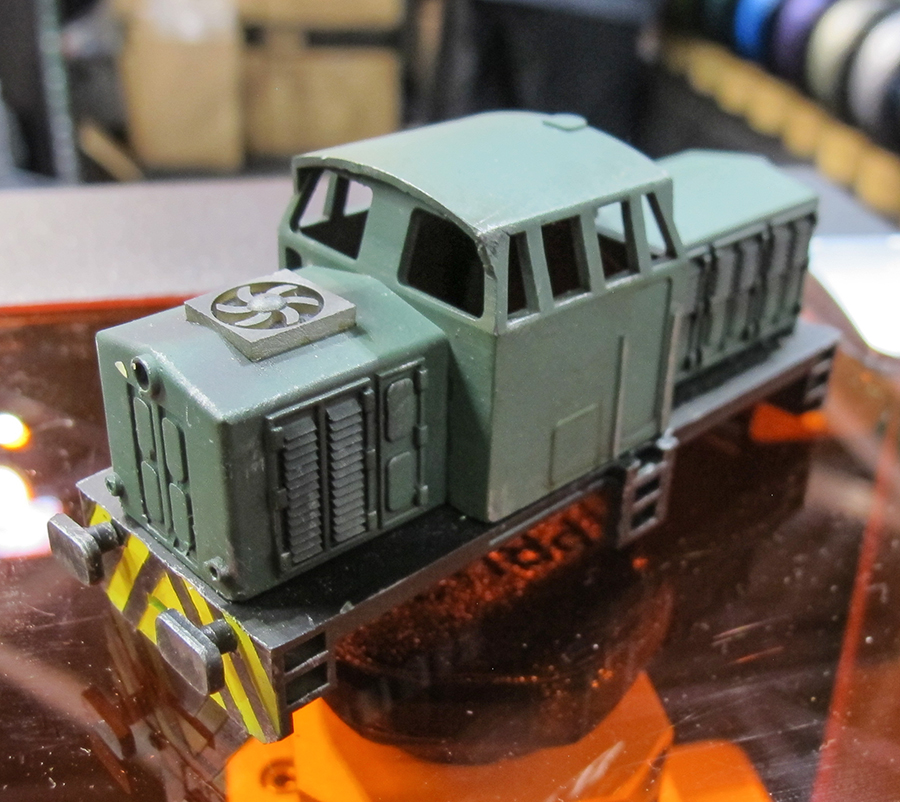 At a large trade show, you can be confident that someone will have tried to print a train, but this year I only found a single example.

This HO scale model was on the PRUSA3D stand, produced by their SL1 resin printer.

Resin printers normally produce far smoother results than FDM models, which is why several manufacturers in our hobby use them for small scale production. Chatting to the team on the stand, it's possible to print a locomotive body vertically so you could run off a bogie diesel.

The model shown is the efforts of a railway modeller on the team and has been airbrush painted but I'm assured is otherwise straight from the machine. It really feels like an injection moulded plastic model, even the weight is similar. Layer height is 0.025 to 0.05mm and each one takes 6 seconds to lay down. 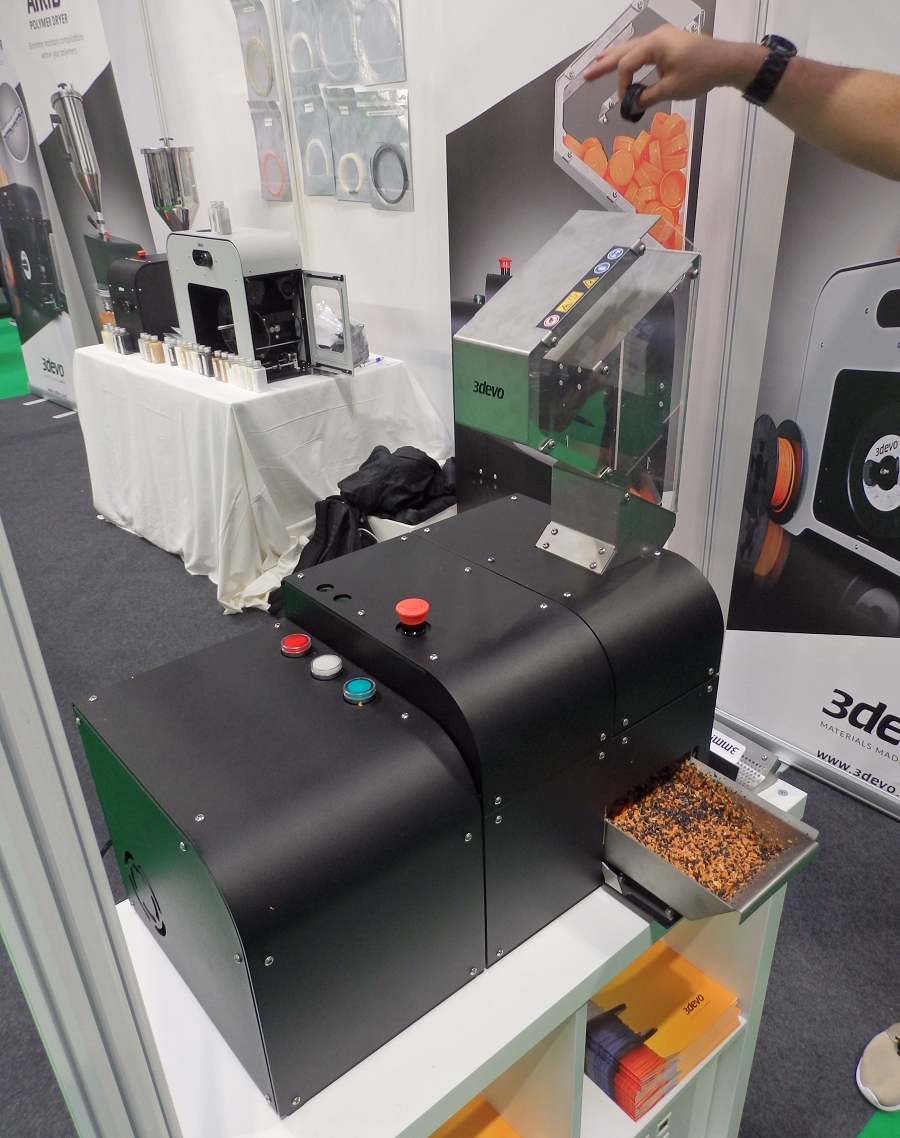 What do you do with old plastics? How about turning them into 3D printer filament so they can have a new life as another object.

3devo were demonstrating a suite of tools to do just that. The process starts with the shredder shown above which takes plastic, they were using what appeared to be mild carton tops, in the hopper and filled a drawer with tiny granules.

Depending on the plastic, the granules might then need to go through a drying process and then into the third machine where they are turned into filament that can then be used in an FDM printer.

With increasing concerns about the use of plastics and the disposal of waster, perhaps this is a "green" future for model making. I wonder if you can grind up old models and half-built kits from the back of your cupboard? 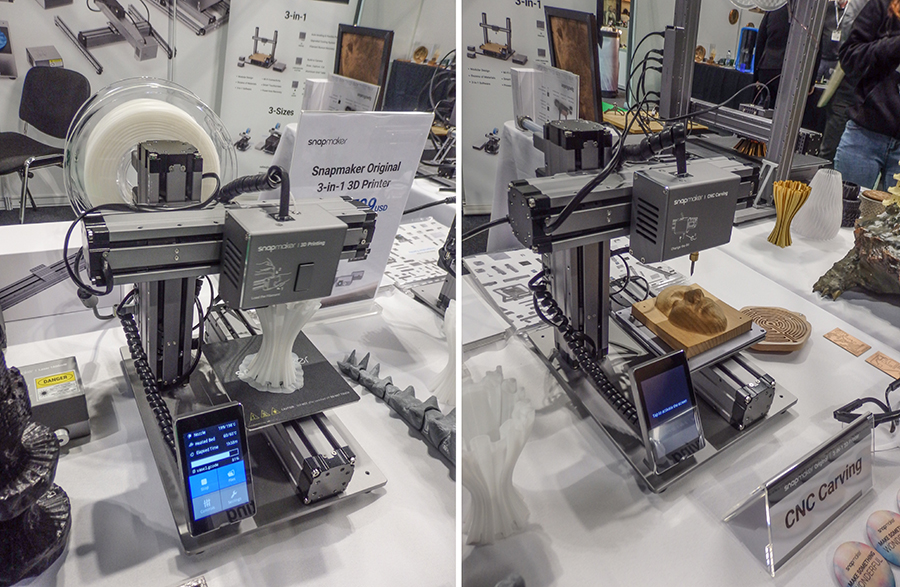 Right, if I could have taken one tool away with me, it would have been the Snapmaker A150. Among all the high-end pieces of equipment, this could find a home in many modelmakers workshop.

For a pre-order price of around £650, you get a machine with three interchangeable heads - FDM 3D printing, laser cutting and engraving and 3D CNC milling.

Supplied as a kit that it's claimed takes half an hour to assemble, the design is modular and therefore expandable. If you need a taller support or more powerful laser, you can have one. There's also an enclosure to keep dust and laser beams confined and the modeller safe.

Support includes a community of users in over 100 countries. The supplied software supports al normal CAD files including SVG, STL and OBJ. Laser engraving can even be carried out from JOG files, so you can burn your photos into pieces of wood or metal.

Perhaps more usefully, the carving tool can be used on PCB material in place of acid etching to produce circuit boards.